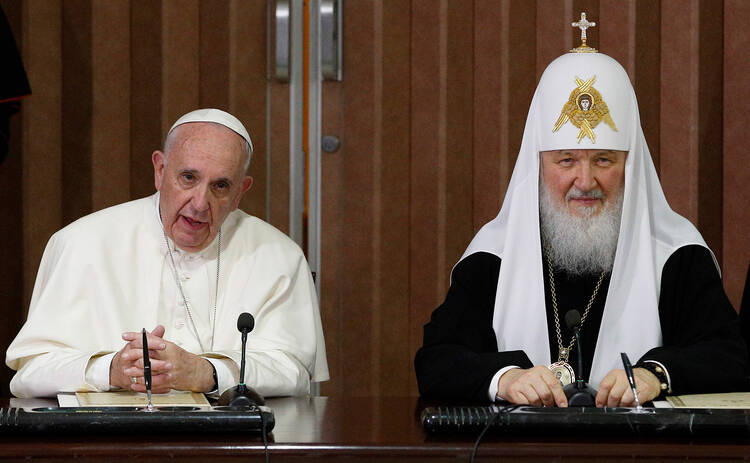 Pope Francis and Russian Orthodox Patriarch Kirill of Moscow attend a ceremony to sign a joint declaration during a meeting at Jose Marti International Airport in Havana in this Feb. 12, 2016, file photo. (CNS photo/Paul Haring)

Pope Francis has suspended a second meeting with Patriarch Kirill of Moscow and All Russia, which was scheduled to be held in Jerusalem in June, because of the war in the Ukraine. He also appeared to identify certain “objectives” for an eventual visit to Kyiv.

“I am ready to do everything to stop the war,” the pope said. “Everything!”

He revealed this in an interview with La Nación, the Argentine daily newspaper, published April 21, the 57th day of the attack on Ukraine by Russian forces ordered by President Vladimir Putin.

Pope Francis: I am ready to do everything to stop the war. Everything!

The Vatican “never tires,” the pope said, of seeking ways of mediation to end this conflict. He added he could not “give details” of all the measures to which Holy See diplomacy had gone because to do so “would cease to be diplomatic means,” he said. “It never stops trying.”

The pope was asked why he has not visited Kyiv despite invitations to do so from Ukrainian President Volodymyr Zelensky and Mayor Vitali Klitschko of Kyiv. “I cannot do anything that puts higher objectives at risk, which are the end of the war, a truce or, at least, a humanitarian corridor,” he said. “What good would it do for the pope to go to Kyiv if the war were to continue the next day?”

Earlier in the week, a source at the Vatican, not authorized to speak on the matter, suggested to America that Francis is willing to go to Kyiv, but it appears conditions would need to be met at the diplomatic level before such a visit is realized.

Pope Francis: I cannot do anything that puts higher objectives at risk, which are the end of the war, a truce or, at least, a humanitarian corridor.

Since Pope Francis first met with Patriarch Kirill in Havana, Cuba, on Feb. 12, 2016, officials from the Vatican and the Patriarchate of Moscow have been working to prepare the second meeting between the pope and the Russian Orthodox leader. Francis has repeatedly said he is willing to go to Moscow, or anywhere else, for these meetings. The Patriarchate has said it wants the meeting to take place in “a neutral venue.”

Pope Francis told La Nación he had scheduled the meeting between him and Kirill for Jerusalem this coming June, but it was now suspended.

“I am sorry to say that the Vatican has had to suspend a second meeting with the Patriarch Kirill, which we had programmed for June in Jerusalem,” the pope revealed. “But our diplomacy understands that a reunion between the two at this time could give rise to much confusion.”

Francis, who in the interview described his relation with Kirill as “very good,” appeared to allude here to the many Catholic, Orthodox, Anglican and Protestant church leaders and faithful in Central Europe and elsewhere who have strongly criticized Patriarch Kirill for his public statements and sermons in support of what President Putin calls a “special military operation” against Ukraine and for his blessing of Russian soldiers involved in that war. Many of these church leaders have made clear to the Vatican they think the pope should cancel the meeting with Kirill.

Pope Francis: I am sorry to say that the Vatican has had to suspend a second meeting with the Patriarch Kirill, which we had programmed for June in Jerusalem.

“I have always promoted interreligious dialogue,” Pope Francis said, adding he has sought to foster “a fruitful” relationship with Christians, Jews and Muslims. “It is one of the initiatives of which I feel most proud. It is the same policy I have promoted in the Vatican,” he said. “For me, agreement is superior to conflict.”

Pope Francis revealed two cardinals expressed to him that “they hope the greater part of the war in Ukraine will end on the first days of May—if not the whole war. But no one can be sure that this is what will finally happen,” he said. This was in reference to a widely shared opinion within diplomatic circles that President Putin wants to end the war and to celebrate the victory in Moscow (or Mariupol) on May 9, which marks the anniversary of the Russian defeat of Nazi Germany at the end of World War II in 1945.

During the interview, the pope was also asked why he has never named Putin or Russia in his many statements since the war broke out on Feb. 24. “A pope never names a head of state,” Francis said, “much less a country which is superior to its head of state.”

The pope also responded to a question concerning his unprecedented personal visit on Feb. 25 to the Russian Embassy to the Holy See. “I went there alone,” he said. “I did not want anyone to accompany me. It was my personal responsibility. It was a decision I took during a sleepless night thinking of Ukraine.” The pope added that his choice to visit “was clear for whoever wished to read it well,” he said. “It was signaling to the government that it could put an end to the war in an instant. To be honest, I would like to do something so that there will not be even one more death in Ukraine—not one more. And I am willing to do everything.”

Russia’s claim that Ukraine would join NATO, and so become a threat to Russian security, was also put to the pope. He was asked if he thought this could justify a war. “Every war is anachronistic in this world and at this level of civilization,” he said. “For this reason also I publicly kissed the flag of Ukraine,” he added. “It was a gesture of solidarity with its dead, with its families and with those who are suffering emigration.”