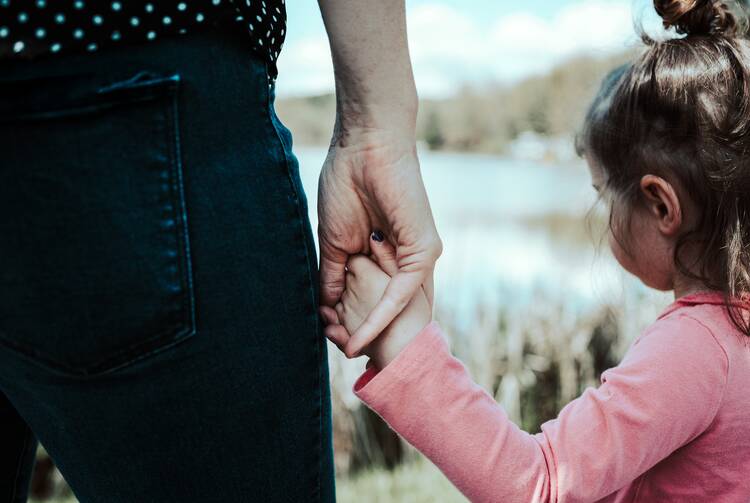 A Reflection for the Second Sunday of Easter

Kids and adults live side by side, but they dwell in different worlds. Here’s an example from my (now distant) childhood. Our neighbors, the Bartas, thought they had one of the few cars with electric windows, but for their son Randy and me, it was a spaceship. Push buttons and things happened. Of course, car batteries are not part of a kid’s world.

Another example. Parents cook, not kids. When dad stepped out of the kitchen one morning, I decided to finish cooking the bacon for him. I vigorously shook the pan, as Dad did when he made popcorn. (I have noted that these examples are from long ago.) He and I were both surprised by the enormous blister the bacon grease produced on my shin.

Adults envy the wonder that kids can find in the everyday world, while kids resent being told that so much of the world is off-limits to them, that they must not touch, not taste, not take into their own hands. What does coffee taste like? What about beer? Yuck to both. Indeed, another neighbor, Mrs. Peter, spanked me as if she were my mom for launching her spacecraft, and all I did was drive it out of the garage!

Kids and adults live side by side, but they occupy different worlds. One is filled with wonder, the other with worry. To some extent, both wish that they could step into each other’s worlds. Why can kids not do what adults do? Why can’t we adults go back to a time when our imaginations were a cause of delight, not anxiety? Would that we could all dwell in a world of wonder without worry!

Kids and adults live side by side, but they occupy different worlds.

Every Easter, we are reminded that we do, or at least that we can. Because, you see, in Easter a third world enters our own. A world none of us can comprehend because neither kids nor adults have ever seen such a place. A dimension where life follows death and repudiates it.

When the first disciples, who were adults, saw this world with their own eyes, they could make no sense of it. Their beloved Jesus had suffered the worst possible death, yet now he was among them again, speaking to them, letting them touch him. They might have been better prepared to understand such a world if they had never grown up to be adults. Such is the world of wonder the Resurrection opens!

We call him doubting Thomas, but we might also call him Thomas the adult. After all, he is being perfectly reasonable. Thomas guards himself against wild, potentially dangerous fantasies. Cars are not spaceships; bacon is not popcorn; people can get killed challenging the order of the world.

Toddlers, when carried up to Holy Communion, naturally want to see what it is that Dad and Mom are receiving and consuming. They are filled with wonder, yet they cannot have even a taste. Both kids and adults see Holy Communion, but what they see does not belong to the world of kids or adults. This nourishment comes from the world Christ entered with his resurrection from the dead. We struggle to express this in the descriptive terms we use: the bread of angels, the cup of salvation.

At his last supper with them, Jesus told his disciples that they did not understand what he was doing but that they would.

We call the last book of the New Testament “Revelation,” though even as we read it, we have an experience we know from childhood. Someone is speaking of a world we have no way of understanding.

When I caught sight of him, I fell down at his feet as though dead.
He touched me with his right hand and said, “Do not be afraid.
I am the first and the last, the one who lives.
Once I was dead, but now I am alive forever and ever.
I hold the keys to death and the netherworld.
Write down, therefore, what you have seen,
and what is happening, and what will happen afterwards” (1:17-19).

At his last supper with them, Jesus told his disciples that they did not understand what he was doing but that they would. When he later returned from the dead, they realized that cup and Calvary were one. He had given his very self to them in that upper room and again the next day upon the cross.

They came to understand, to the extent anyone can, that Jesus would be in their midst every time they gathered to break the bread and drink his cup. As Pope Benedict XVI once put it, “Whether Jesus merely was or whether he also is—this depends on the Resurrection.”

Hard to believe, especially for adults, unless we also receive a generous dollop of that next world’s wonder, which we call grace.