Pope Francis: Migration is not a crisis. It is a sign of our times. 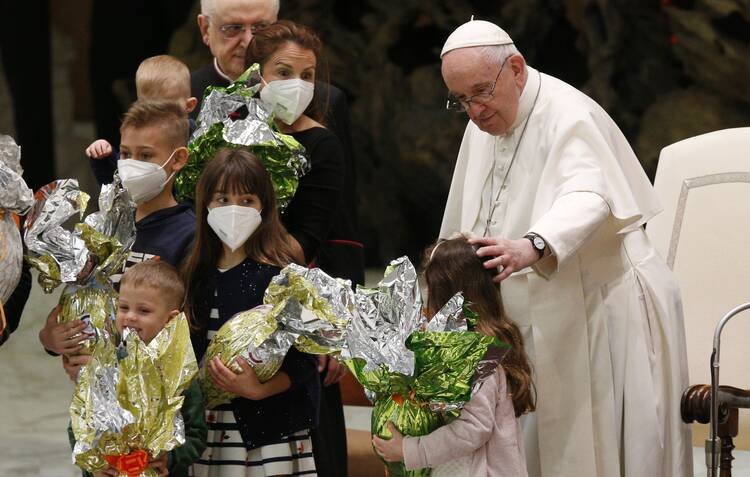 Below is the text of Pope Francis’ weekly Wednesday audience, delivered on April 6, 2022.

Last Saturday and Sunday I traveled to Malta: an Apostolic Journey that had been planned for quite some time. It was postponed two years ago due to Covid and these things. Not many people know about Malta, even though it is an island in the middle of the Mediterranean. It received the Gospel very early. Why? Because the Apostle Paul was shipwrecked near its coasts and miraculously saved himself along with all those on the ship with him—more than 270 people.

The book of the Acts of the Apostles recounts that the Maltese welcomed all of them, and uses this word: “with unusual kindness” (28:2). I chose these very words—with unusual kindness—as the motto of my Journey because they indicate the path to follow, not only to face the phenomenon of migrants, but more generally, so that the world might become more fraternal, more livable, and might be saved from a “shipwreck” that menaces all of us. For we are all—as we have learned—in the same boat, all of us. Viewed from that horizon, Malta is a key-place.

Above all, it is so geographically, due to its position in the center of the Sea between Europe and Africa, that also bathes Asia. Malta is a sort of “wind rose”, where peoples and cultures meet. It is a perfect place to observe the Mediterranean area from a 360-degree perspective. Today we often hear about “geopolitics”. But unfortunately, the dominant logic is the strategies of the most powerful countries to affirm their own interests, extending their area of economic influence, or ideological influence, and/or military influence.

After World War II, the attempt was made to lay the foundations of a new era of peace. But, unfortunately—we never learn, right?—the old story of competition between the greater powers went on.

We are seeing this with the war. In this scheme [situation], Malta represents the rights and power of the “small” nations, small but rich in history and civilization that should lead toward another logic—that of respect and freedom—the logic of respect and also the logic of freedom, of the coexistence of differences, opposed to the colonization of the most powerful. We are seeing this now. And not only from one side: even from others.... After World War II, the attempt was made to lay the foundations of a new era of peace. But, unfortunately—we never learn, right?—the old story of competition between the greater powers went on. And, in the current war in Ukraine, we are witnessing the impotence of the Organizations of the United Nations.

Second aspect: Malta is a key-place regarding the phenomenon of migration. In the John XXIII welcome center, I met numerous migrants who landed on the island after terrible journeys. We must never tire of listening to their testimonies because only this way can we emerge from a distorted vision that is often circulated in the mass media, and the faces, the stories, the wounds, the dreams and the hopes of these migrants can emerge. Every migrant is unique. He or she is not a number but a person. Each is unique just like each one of us. Every migrant is a person with dignity, with roots, with a culture. Each of them is the bearer of a wealth infinitely greater than the problems they bring. And let us not forget that Europe was made of migrations.

Certainly, welcoming them must be organized—this is true—and supervised; and first, long before, it must be planned together, at an international level. The phenomenon of migration cannot be reduced to a crisis; it is a sign of our times. It should be read and interpreted as such. It can become a sign of conflict, or rather a sign of peace. It depends on how we take it; it depends on us.

Those who gave life to the John XXIII Centre on Malta made the Christian choice. This is why it is called “Peace Lab”: laboratory of peace. But I would like to say that Malta in its entirety is a laboratory for peace! The entire nation through is attitudes, its own attitudes, is a laboratory for peace. And it can realize this, its mission, if it draws the sap of fraternity, compassion and solidarity from its roots. The Maltese people have received these values, together with the Gospel. And, thanks to the Gospel, they will be able to keep them alive.

For this reason, as Bishop of Rome, I went to confirm that people in the faith and in communion. In fact—the third aspect—Malta is the key-place from the perspective of evangelization as well. From Malta and from Gozo, the country’s two dioceses, many priests and religious, but even lay faithful, left to bring their Christian witness all over the world. It is as if Paul’s passing through there left his mission in the DNA of the Maltese! For this reason, my visit was above all an act of gratitude – gratitude to God and to the holy, faithful people from Malta and Gozo.

Nevertheless, the wind of secularism, of a globalized pseudo-culture based on consumerism, neo-capitalism and relativism, blows there as well. Therefore, it is time for the new evangelization there too. Like my predecessors, the visit that I made to the Grotto of Saint Paul was like drawing from the spring so that the Gospel might flow through Malta with the freshness of its origins and revive its great heritage of popular religiosity.

The joy of the Church is to evangelize. Let us not forget this any longer: it is the most beautiful definition of the Church.

I take this opportunity to renew my gratitude to the President of the Republic of Malta, so courteous and brotherly: Thanks to him and to his family; to the Prime Minister and the other Civil Authorities who welcomed me with such kindness; as well as the Bishops and all the members of the ecclesial community, to the volunteers and to all who accompanied me in prayer. I would not want to neglect to mention the welcome Centre for migrants, John XXIII: and the Franciscan Friar there [Father Dionisio Mintoff] who keeps it going at the age of 91, and continues to work thus with collaborators from the diocese. It is an example of apostolic zeal and love for migrants which is very much needed today.

Through this visit, we sow, but it is the Lord who gives the growth. May His infinite goodness grant abundant fruit of peace and every good to the dear Maltese people! Thanks to the Maltese people for such a human, such a Christian welcome. Thank you very much.

Editor’s note: At the end of his address, Pope Francis spoke about the war in Ukraine, holding up a flag he received from the besieged city of Bucha. You can read more here.