There are two responses to sin: shame and compassion 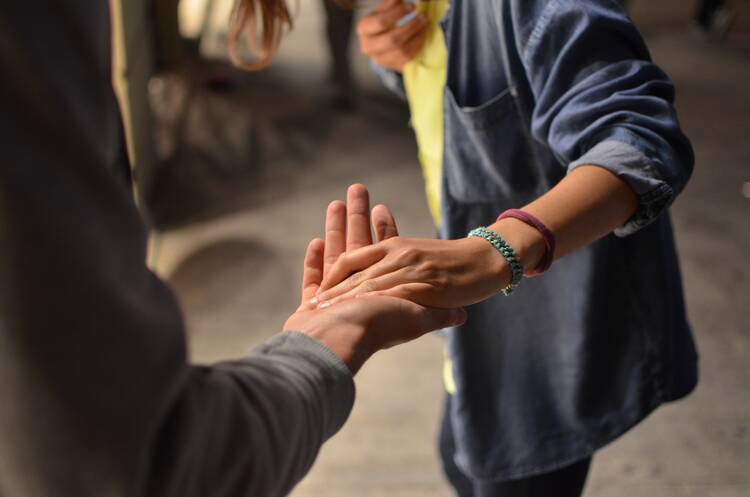 A Reflection for Palm Sunday

When all the world hates you, an act of kindness means “all the world” to you. Before his great fall from favor, his conviction in a British court for the crime of sodomy, Oscar Wilde was, after Queen Victoria, the most famous person in Britain. A celebrated playwright and wit, the world (or at least the highest reaches of British society) belonged to him.

Oscar Wilde wrote a letter in prison, which he later entitled De Profundis, the opening lines in Latin of Psalm 130: “Out of the depths I call to you, O Lord” (1). Though he confessed himself guilty, Wilde presented his own suffering as patterned upon that of Christ. “Where there is sorrow there is holy ground. Someday people will realize what that means. They will know nothing of life till they do.”

Before you chafe at comparing Wilde, or anyone else, to Christ, remember it was the Lord who compared himself and made himself equal to those who suffer. Wilde, therefore, is quite right. “Where there is sorrow there is holy ground.”

Before you chafe at comparing Wilde, or anyone else, to Christ, remember it was the Lord who compared himself and made himself equal to those who suffer.

Wilde recalls being led out of court, flanked by two policemen, through a jeering mob. His young friend Robbie Ross was in the crowd, but he did not jeer. Instead, he tipped his hat to Wilde, who later wrote that Robbie had

waited in the long dreary corridor that, before the whole crowd, whom an action so sweet and simple hushed into silence, he might gravely raise his hat to me, as, handcuffed and with bowed head, I passed him by. Men have gone to heaven for smaller things than that. It was in this spirit, and with this mode of love, that the saints knelt down to wash the feet of the poor, or stooped to kiss the leper on the cheek. I have never said one single word to him about what he did. I do not know to the present moment whether he is aware that I was even conscious of his action. It is not a thing for which one can render formal thanks in formal words. I store it in the treasure-house of my heart. I keep it there as a secret debt that I am glad to think I can never possibly repay. It is embalmed and kept sweet by the myrrh and cassia of many tears.

In St. Luke’s Gospel, Jesus makes two trips to Jerusalem. He twice keeps Passover in the holy city. In Luke’s second chapter, the boy Jesus is celebrated at his first appearance in Jerusalem. His parents find him

sitting in the midst of the teachers,
listening to them and asking them questions,
and all who heard him were astounded
at his understanding and his answers (Lk 2:46-47).

So, Oscar Wilde was closer in comparing himself to Jesus than we might at first judge. Their respective cities, London and Jerusalem, turned on them.

As his Gospel opens, St. Luke tells us that Jesus has come for the “people”. And as his story unfolds, the “crowd” or the “people” are everywhere, mobbing Jesus, listening to his lectures, asking him questions and making requests, feeling awe and joy over his miraculous deeds and praising God.

How then it must have wounded the very soul of Jesus to hear the crowd turn against him when Pilate offers to release him.

But all together they shouted out,
“Away with this man! Release Barabbas to us.”
Again Pilate addressed them,
still wishing to release Jesus,
but they continued their shouting,
“Crucify him! Crucify him!”
With loud shouts…they persisted
in calling for his crucifixion,
and their voices prevailed (Lk 23:18-23).

Not so the simplest souls in Luke’s Gospel! Remember the shepherds at Bethlehem, or Simeon and Anna in the temple? St. Luke likes to mention men and women in pairs. Here they both respond with compassion. A stranger, Simon the Cyrenian, helps Christ to carry his cross, and only in the Gospel of Luke does Jesus encounter the weeping women of Jerusalem.

What is so frightening about our contemporary culture is that it withholds, even forbids, compassion for the shamed.

Wilde and Christ both walked through jeering crowds, like countless others before and since. Shaming has always been a moral tool. “Cancel culture” is only its latest iteration. Now, shaming has become an industry. Facebook and Google profit every time a post of shame goes viral.

What are we to learn? First, perhaps we need to go slower with shame. It is too powerful a tool to wield carelessly.

Second, compassion is the natural movement of the hearts God created. Indeed, one needs the impediment of sin to withhold compassion. What is so frightening about our contemporary culture is that it withholds, even forbids, compassion for the shamed.

When wisdom has been profitless to me, philosophy barren, and the proverbs and phrases of those who have sought to give me consolation as dust and ashes in my mouth, the memory of that little, lovely, silent act of love has unsealed for me all the wells of pity: made the desert blossom like a rose, and brought me out of the bitterness of lonely exile into harmony with the wounded, broken, and great heart of the world.

There is so much wrong with this old, wonderful world. There is much we cannot fix. Yet our ability to feel compassion for those who suffer is both a trace of our origin in God and a promise of our fulfillment in the same. Remember, Christ would not have met these weeping women, he would never have been in the street, his blood-raw skin burning, his every muscle inflamed, were it not for his own compassion.