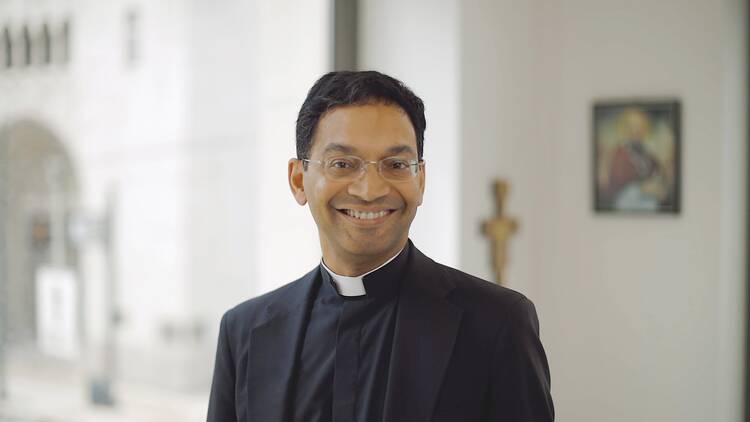 Father Earl K. Fernandes, a former staff member of the apostolic nunciature in Washington and currently a Cincinnati pastor, has been named bishop of Columbus, Ohio. (CNS photo/courtesy Archdiocese of Cincinnati)

WASHINGTON (CNS) -- Pope Francis has appointed Father Earl K. Fernandes, a former staff member of the apostolic nunciature in Washington and currently a Cincinnati pastor, to head the Diocese of Columbus, Ohio.

At 49, Bishop-designate Fernandes will be one of the youngest U.S. Catholic bishops. Ordained a priest of the Archdiocese of Cincinnati May 18, 2002, he served at the nunciature from 2016 to 2019. He has been pastor of St. Ignatius of Loyola Parish since 2019.

His appointment was announced in Washington April 2 by Archbishop Christophe Pierre, apostolic nuncio.

Bishop-designate Fernandes will be the 13th bishop of Columbus. His episcopal ordination and installation will take place May 31 at St. Joseph Cathedral in Columbus.

“We will miss his incredible intellect, unflagging energy and concern for all people, but know that these traits will serve him well as he expands his ministry to shepherd the faithful people of Columbus,” Cincinnati Archbishop Dennis M. Schnurr said in a statement.

At 49, Bishop-designate Fernandes will be one of the youngest U.S. Catholic bishops.

“Through all his assignments, Father Fernandes has been an ever-joyful witness to the goodness, beauty and truth of the Catholic faith,” the archbishop said, asking the faithful of the archdiocese to join him in congratulating the Cincinnati priest “on this joyous news.”

“Let us keep our beloved brother in prayer as he starts this new ministry,” he added.

Bishop-designate Fernandes said he was “grateful to almighty God and to the Blessed Virgin Mary for my vocation.”

“Recognizing my own unworthiness, I accepted, with fear and trepidation but also with joy, the appointment by Pope Francis to serve as the 13th bishop of the Diocese of Columbus,” he said in an April 2 statement. He thanked the pope and Archbishop Pierre “for giving me the opportunity to proclaim the joy of the Gospel in the Diocese of Columbus, the capital of our beloved state of Ohio.”

“I look forward to meeting the people of God -- the priests, deacons, religious and lay faithful of the Diocese of Columbus -- and to collaborating with them in announcing the joyful good news and building the kingdom of God,” Bishop-designate Fernandes added.

“Recognizing my own unworthiness, I accepted, with fear and trepidation but also with joy, the appointment by Pope Francis to serve as the 13th bishop of the Diocese of Columbus,” he said.

“I ask for your prayers, not only for me but also for our diocese, that the Holy Spirit may enkindle in all of us the fire of his divine love,” he said. “May God grant me the grace to serve his people well and to be an ardent yet gentle shepherd, whose heart is formed after the heart of Jesus.”

Bishop-designate Fernandes was secretary at the nunciature from 2016 to 2019. Before that he was dean and assistant professor of moral theology at Mount St. Mary’s Seminary in Cincinnati from 2008 to 2016.

He is the published author of one book and numerous articles and essays, and has given talks and retreats across the country.

Born Sept. 21, 1972, in Toledo, Ohio, he is the fourth of five boys born to Indian immigrants. After graduating from St. Francis de Sales High School in Toledo, he earned a bachelor’s degree in biology from the University of Toledo.

He moved to Cincinnati to study at the University of Cincinnati College of Medicine. He had completed two years of medical school when he felt called to the priesthood. In 1996, at age 24, he went to a house of spiritual discernment in Rome. A year later he entered Mount St. Mary’s Seminary in Cincinnati, where he earned master’s degrees in divinity and theology.

After his 2002 ordination, he was assigned to Holy Angels Church in Cincinnati as associate pastor and taught at Lehman Catholic High School.

For the next eight years he was academic dean and an assistant professor of moral theology at Mount St. Mary’s Seminary. From 2008 to 2014, he was a weekend assistant at Guardian Angels Church in Cincinnati, and from 2014-2016, he was the administrator of Sacred Heart Church in Cincinnati.

In 2016, he went to the apostolic nunciature in Washington where he was secretary. In 2019 he returned to Cincinnati and was named pastor of St. Ignatius of Loyola Parish.

He has been a board member of the Starfire Council of Greater Cincinnati, which assists disabled people. He is the published author of one book and numerous articles and essays, and has given talks and retreats across the country.

In 2020 he was named to the board of trustees of the Pontifical College Josephinum in Columbus.

An avid reader and writer, Bishop-designate Fernandes has a particularly strong interest in education, culture and languages. In addition to English, he is fluent in Italian, Spanish and French.

The Diocese of Columbus is comprised of 23 counties in central and southern Ohio. It covers 11,310 square miles and has a Catholic population of about 207,000 out of a total population of over 2.8 million.