Pope Francis last spoke to Putin before New Year’s, is willing to visit Kyiv but that is ‘up in the air’ 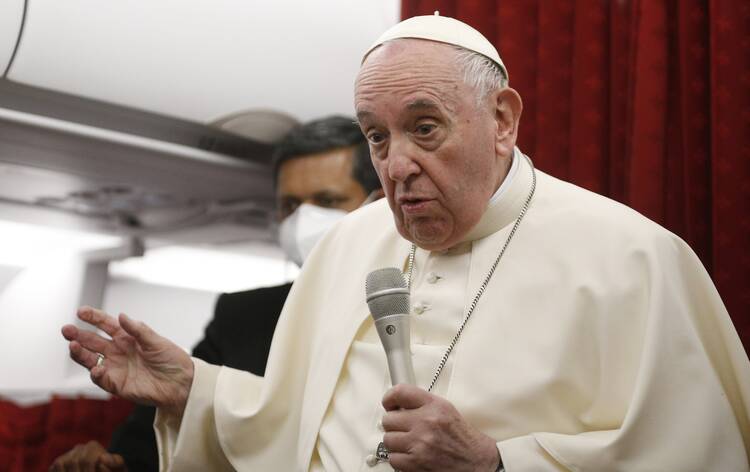 During the short 90-minute return flight from his visit to Malta, Pope Francis indicated that he had not spoken directly to Russian President Vladmir Putin regarding the war in Ukraine and also discussed a potential papal visit to Kyiv. He also spoke about the possibility of a second meeting with Patriarch Kirill, this time in the Middle East, the immigration crisis, his mobility difficulties due to a problem with his right knee, and his joy at his visit to Malta.

Pope Francis has spoken out repeatedly about the war in Ukraine, now in its sixth week. During the first days of the war, the pope made a significant visit to the Russian embassy to the Holy See to express his concern, but has not directly discussed Mr. Putin in his condemnations of the war and his calls for peace. For this reason, when selected to offer a question on behalf of the Anglophone journalists on the flight, I asked the pope:

Several times during this trip you have talked about the war. The question everyone is asking is whether since the beginning of the war you have spoken to President Putin, and if not, what would you say to him today?

(Note: The pope spoke in Italian during the press conference; the English translation used here has been provided by Vatican Media.)

Pope Francis answered “The things which I've said to authorities on all sides are public. None of the things I have said are confidential.” He went on to say that he last spoke to Mr. Putin “at the end of last year when he called me to wish me ‘happy birthday,’” meaning that he has not spoken to Mr. Putin since Russian troops began their invasion of Ukraine.

Francis spoke about other conversations he has had with Ukrainian President Vlodomyr Zelensky, with whom he has spoken twice since the start of the war and with Russian Orthodox Patriarch Kirill, with whom he held a virtual conversation on March 16.

Francis recalled that “on the first day of the war, I felt I had to go to the Russian Embassy to speak to the Ambassador who is the representative of the people, and ask questions and offer my impressions regarding the situation.” As reported in America at the time, this was a major break from diplomatic protocol, but reflected the depth of Francis’ feelings. Later, Cardinal Pietro Parolin said Francis had called for a ceasefire, and negotiations, but Francis gave no additional details in his answer tonight.

“These are the official contacts I have had. With Russia I did it through the embassy,” Francis said.

Pope Francis also said that he had spoken with other people, too, including the Major Archbishop Sviatoslav Shevchuk of the Greek Catholic church in Ukraine and the rector of that church’s seminary in Lviv.

He also described how he has followed developments in the war, saying “I have also spoken regularly—every two or three days—with one of you, Elisabetta Piqué, who was in Lviv and is now in Odessa. She tells me how things are.” (Disclosure: Elisabetta Piqué is the wife of Gerard O’Connell, the author of this piece and America’s Vatican correspondent. Since the war started, she has been reporting for the Argentinian newspaper La Nación from Kyiv and other places in Ukraine since the war started, including at the Greek Catholic seminary in Lviv.)

Francis expressed condolences for the seven journalists that have so far been killed in the war and said that their work and that of the other journalists covering the war “is on behalf of the common good.”

I followed up on the second part of the original question, asking “But what would be your message for Putin if you had a chance [to speak to him]?”

Pope Francis did not directly address what he would say to Mr. Putin, but instead responded: “The messages I have given to all the authorities are the ones I have done publicly. I do not do double-speak. I always speak the same.”

He spoke about “the pattern of war,” describing every war as starting from an injustice and saying that humanity is stubborn, “in love with wars, with the spirit of Cain.”

Francis recalled his hope for peace, as expressed in his encyclical “Fratelli tutti,” and the need to mourn lives lost in war. He concluded his long answer on the subject of the war: “We never learn. May the Lord have mercy on us, on all of us. Every one of us is guilty!”

He concluded his long answer on the subject of the war: “We never learn. May the Lord have mercy on us, on all of us. Every one of us is guilty!”

Responding to a question from the Spanish journalist Jorge Antelo Barcia, Francis said that a trip to Kyiv “is on the table.” The pope noted the many uncertainties are such a visit, saying “I don't know if it can be done, if it is fitting, and whether if would be for the best or if it is fitting to undertake it, and whether I should go… all this is in the air.” He also mentioned the possibility of a visit to the Polish border, where Ukrainian refugees from the war are being received.

In his question, Mr. Barcia also told the pope about reports of atrocities coming from Bucha, a village near Kyiv, as the Russian army is withdrawing from the area. Pope Francis thanked him for the news about the killings at Bucha, saying that he was “not yet aware.” He continued, “War is always an act of cruelty, an inhuman thing, that goes against the human spirit.”

Pope Francis reiterated his willingness to do “whatever needs to be done” and said that the diplomatic officials of the Holy See are doing “everything possible,” but remarked, “We cannot render public everything they do, for prudence, for confidentiality, but we are pushing the boundaries of our work.” This last remark is significant because, as many in Rome suspect, the Holy See appears to be involved in background diplomatic work to bring a stop to the fighting and support negotiation that has remained confidential.

He then went on to speak about a possible second face-to-face meeting with Patriarch Kirill of Moscow. Francis said, “For some time there have been considerations made regarding a meeting with Patriarch Kirill; that’s what’s being worked on, with the possibility of the Middle East as a venue for such a meeting. This is how things are being considered at the moment.” One possibility that has been suggested is a meeting in Jerusalem. The pope’s comments seem to make clear that their next meeting, if it happens, would not be in Moscow or Rome.

For some time there have been considerations made regarding a meeting with Patriarch Kirill; that’s what’s being worked on, with the possibility of the Middle East as a venue for such a meeting.

The first question during the press conference, from Maltese journalist Andrea Rossitto, touched on Pope Francis’ health, in reference to the fact that Francis had mobility difficulties because of problems with his knee that had obviously caused him pain during the trip.

Pope Francis responded first to the question about his health. “My health is a bit capricious.” He said that his health has been improving: “Two weeks ago, I couldn't do anything. It's a slow thing; we’ll see if it comes back. However, a doubt arises at this age about not knowing how the game will end. Let's hope it goes well.”

Pope Francis also expressed his happiness with the visit to Malta and his appreciation for the people who turned out to greet him, even on a short trip.

Discussing the issue of migration, which has provoked tensions in Malta, Pope Francis said, this was also a general problem for Europe, especially in the Mediterranean countries closest to Africa and the Middle East. Recalling his final stop of the visit, at a migrant reception center, Francis called for these migrants to be welcomed, saying “Just as Europe is making room so generously for the Ukrainians who knock on the door, so too [it should make room] for the others who come out of the Mediterranean.” He said that this burden should be shared by European countries and not left only to those that are closest to the problem.