Bringing my imperfect self to confession 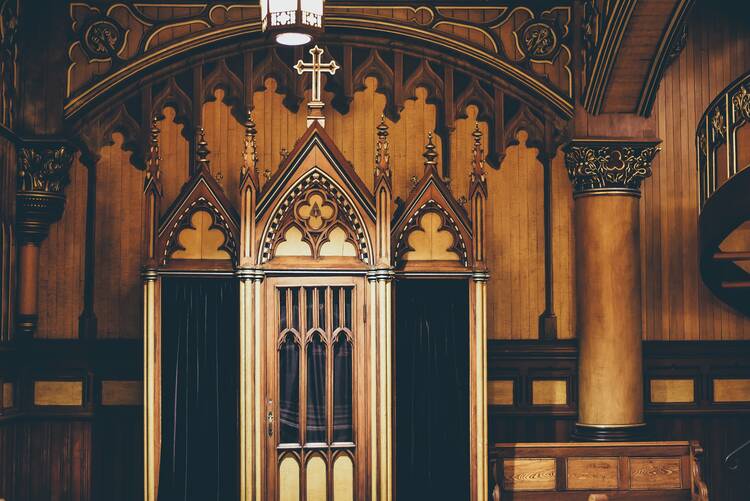 A Reflection for the Monday of the Third Week of Lent

“My father,” they said,
“if the prophet had told you to do something extraordinary,
would you not have done it?
All the more now, since he said to you,
‘Wash and be clean,’ should you do as he said” (2 Kings 5:13-14).

Confession: I really struggle to go to confession. And not because I’ve ever had a negative experience in the box. In fact, one of the defining moments in my faith life was confessing to a Dominican father at my university parish and, through him, encountering God’s extravagant love and mercy.

So why don’t I go back regularly? I think part of it is that it seems too good—and too easy—to be true. It can’t possibly be the case that I just tell a priest my sins and God forgives me, can it? And this mindset leads me to feel like I need to craft the perfect confession if it’s going to work. Before I confess, I need to deeply scrutinize my sins and write and rewrite everything I am going to say (I am an editor), and after all that, it still doesn’t seem good enough to deserve God’s forgiveness.

So I can relate to Naaman, who we meet in today’s first reading. Naaman is a commander of the king of Aram’s army, “but valiant as he was, the man was a leper.” A young girl from the land of Israel is captured in a raid by the Arameans and made a servant of Naaman’s wife. She tells her captors of a prophet in Israel who can cure Naaman’s leprosy. Naaman sets out to the land of Israel and is told by the prophet Elisha to “w​​ash seven times in the Jordan” and he will be healed.

Would I be more willing to approach the Lord for forgiveness if it required something extraordinary?

Naaman leaves in a huff, his pride clearly wounded. If all he needed to do is bathe in a river, why leave his homeland? But his servants, seemingly aware of their master’s wounded pride, convince him to follow Elisha’s counsel. “My father,” they said, “if the prophet had told you to do something extraordinary, would you not have done it?”

Would I be more willing to approach the Lord for forgiveness if it required something extraordinary? Why am I able and willing to put hours a week into training for a half marathon, but showing up for confession seems comparable to climbing Mount Everest?

These are the questions I am pondering this Lent, and my prayer is that, like Naaman, I can become more open to God’s gratuitous mercy. God does not need me to be perfect before I show up for confession. He just needs me to want to be there.

Get to know Ashley McKinless, executive editor and co-host of Jesuitical

I’m committing to (at least) one week-day Mass per week and giving up my standard: sweets.

No. This was especially trying as a child when it seemed Girl Scout cookie season always overlapped with my chocolate-free Lents. Thankfully, Thin Mints freeze well.

I know it’s not spring yet, but I eat this Spaghetti squash primavera all year round.

I love the hymn “Come Thou Fount Of Every Blessing.” I know some consider this more of an Advent/Christmas song, but the story behind its creation touches on the Lenten themes of conversion and turning back to God.

Ashley McKinless is an executive editor at America and co-host of the Jesuitical podcast.