How could God let Ukraine happen? That’s the wrong question. 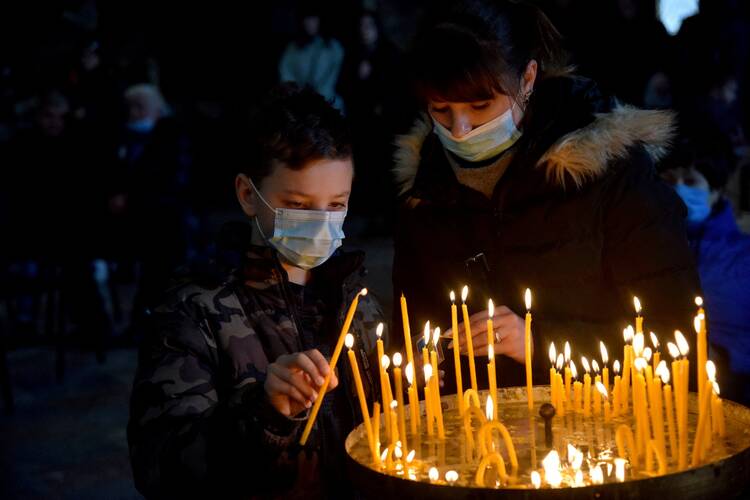 A boy lights candles at the Catholic Church of the Holy Apostles Peter and Paul, amid Russia's invasion of Ukraine, in Lviv, Ukraine, March 13, 2022. (CNS photo/Pavlo Palamarchuk, Reuters)

A Reflection for the Thursday of the Second Week of Lent

“Cursed is the man who trusts in human beings....
He is like a barren bush in the desert that enjoys no change of season,
But stands in a lava waste, a salt and empty earth” (Jer 17:5-6).

One day, at the beginning of the pandemic, I bought an aloe vera plant impulsively. In those early weeks of isolation, I needed another living thing to care for. I even gave my plant a name: Filbert.

Aloe plants, like cacti, don’t need much watering since they store water in their leaves. With this in mind, I was scrupulous about not over-watering Filbert, to the point that I would often go without watering him for a month or more.

Unfortunately, I ended up with the rare mistake of not having watered my aloe enough. After two years, he withered and died from well-intentioned neglect. Cursed is even the plant who trusts in human beings, apparently.

My faith has suffered similarly the last several weeks, made desiccated and limp by the scorching fires of violence in Ukraine. It is now my generation’s turn to look back and forth between heaven and the battlefield and ask, “How can you, God, let this happen?” In doing so, we join a venerable procession of our forebears who, plunging their hands into the ashes of war, have grasped for meaning.

Even in pain and evil, God manages to show us glimpses of his face. Dark though this moment be, it makes the light all the more visible.

But perhaps a better question is, “How can we let this happen?” Do we still put our faith in guns, flags and fallible leaders? Have we humans learned nothing from the past century or even the past millennium? With this war, we stand in “a salt and empty earth” of hubris, greed and ignorance.

But the raindrops of God’s goodness stand out all the more as they nourish our parched spirits. German families crowding train stations to take in refugees, Russians protesting war at risk of imprisonment, a Ukrainian pianist playing Louis Armstrong in the midst of chaotic exile—God is here in all of this, reminding us humans of the kernel of goodness that remains in us.

Even in pain and evil, God manages to show us glimpses of his face. Dark though this moment be, it makes the light all the more visible. Only in the dead of night can we see a candle’s quivering flame from miles away.

I wasn’t planning to give up anything. But Simcha Fisher’s article about giving up chocolate convinced me, a chocoholic, that it can be a legitimate sacrifice.

No, mostly because I forget to.

I make a vegetarian burrito with a tortilla, refried beans, chopped onion, tomato, cheddar cheese and copious amounts of sour cream. It’s sad, but it gets the job done.

I always loved when on Easter my parish growing up would sing the Celtic “Alleluia” before the Gospel after so many weeks of the solemn “Praise to you, Lord Jesus Christ.” It feels like a collective sigh of relief after Lent.