Podcast: How Benedict XVI should respond to the German abuse report 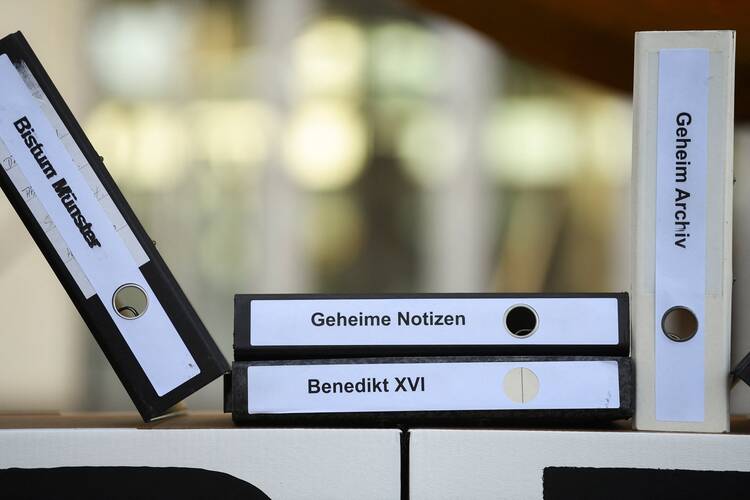 Mock folders with the labels "Secret Notes" and "Benedict XVI" concerning the abuse cases in the German Catholic Church are seen during a protest in front of the Catholic Academy in Munich Jan. 27, 2022. (CNS photo/Andreas Gebert, Reuters)

An investigation, last month, into sexual abuse in the German archdiocese of Munich and Freising found that when Pope Emeritus Benedict XVI served as its archbishop he had mishandled cases of sexual abuse committed by members of his clergy. His successors in Munich, Cardinal Friedrich Wetter and Cardinal Reinhard Marx, have also been accused of mishandling cases of sexual abuse.

This week on “Inside the Vatican,” host Colleen Dulle and veteran Vatican correspondent Gerard O’Connell continue their analysis into the allegations made in the report and Cardinal Marx’s subsequent response. They also discuss Gerry’s interview with Hans Zollner, S.J., a leading abuse prevention expert based at the Vatican.

Gerry reveals the pope emeritus’ contribution to the report was assembled by at least two German lawyers who were given a document that proved Benedict attended a 1980 meeting where one of the four abuse cases was discussed. Despite having the evidence, the lawyers wrote that Benedict was not present at the meeting, and Benedict signed their report. In a statement, Benedict attributed the mistake to an editing error.

Colleen and Gerry also recap Pope Francis’ recent address where he counseled parents of L.G.B.T. children never to condemn their child, and the broader context within which this advice was given.