As a Russian invasion of Ukraine looms, Pope Francis calls for a world day of prayer 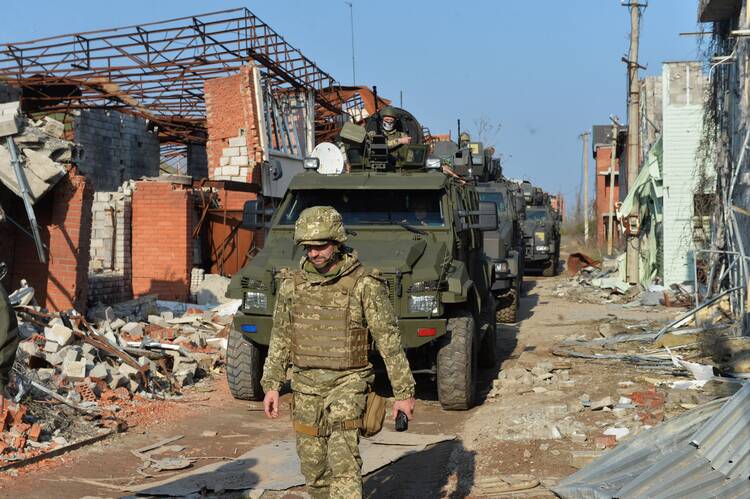 Members of the Ukrainian armed forces drive military vehicles past destroyed buildings on the line of separation from pro-Russian rebels in Shyrokyne, Ukraine on April 21, 2021. (CNS photo/Oleksandr Klymenko, Reuters)

As tensions increase in Europe over fears of a Russian invasion of Ukraine, Pope Francis has issued a heartfelt call for a World Day of Prayer for peace on January 26.

“I am following with concern the increase of tensions that threaten to inflict a new blow to the peace in Ukraine, and call into question the security of the European continent, with wider repercussions,” he told pilgrims in St. Peter’s Square on Sunday, January 22.

Russia has amassed some 100,000 troops and military hardware on its border with Ukraine as well as in Belarus, on the northern side of the Ukraine, while the Ukraine government has told its 43 million people to prepare for war. Ukraine is the second largest country in Europe in terms of size after Russia, and was part of the U.S.S.R. until it regained its independence in 1991 following the dissolution of the Soviet Union.

Russia already annexed part of Ukraine—the Crimea—almost exactly eight years ago, and has supported separatist movements in the eastern Ukraine. It is putting pressure on the United States and other members of the North Atlantic Treaty Alliance Organization to prevent Ukraine from joining NATO or hosting weapons on its territory that could be used against Russia.

Russian president Vladamir Putin has repeatedly stated that Russia does not intend to invade Ukraine, but the recent military maneuvers suggest otherwise. Ukraine authorities have appealed for help from the West. The United States this past week sent military equipment to the country, as has the United Kingdom, while the three Baltic states—Estonia, Latvia and Lithuania—announced that they are sending military aid to Ukraine to help it defend its territory in the face of a possible Russian invasion. The United States and the European Union’s 27 countries have threatened grave sanctions against Russia in the event of an invasion.

Russian president Vladamir Putin has repeatedly stated that Russia does not intend to invade Ukraine, but the military maneuvers suggest otherwise.

At the same time, diplomatic efforts are underway to de-escalate the tensions and prevent an invasion. United States Secretary of State Antony Blinken has been in Europe this past week and met Ukraine’s President Volodymyr Zelenskiy in Kyiv. He also sat down with his Russian counterpart, Sergey Lavrov in Geneva, but without reaching an accord, though they agreed to continue to negotiate.

In this tense and volatile situation, Pope Francis today called for prayers worldwide. He began by saying, “I make a heartfelt appeal to all people of good will, that they may raise prayers to God Almighty, that every political action and initiative may serve human brotherhood, rather than partisan interests.”

Then, in unusually strong words that appeared to be directed to both Russian and Ukrainian leadership, Francis said, “Those who pursue their own interests, to the detriment of others, disregard their human vocation, as we were all created as brothers and sisters.”

Commenting on this statement, a Vatican source who asked not to be identified because he was not authorized to speak on the subject told America that the risk is that a false move or provocation by the Ukrainians could provide an opening for the Russians to invade. Such an invasion would create an extremely dangerous situation that would be very difficult to control, he added.

Pope Francis concluded his remarks today saying, “For this reason, and with concern, given the current tensions, I propose that next Wednesday, 26 January be a day of prayer for peace.”

Earlier in the week, the Presidency of the Council of the European Bishops Conferences expressed their solidarity with the churches and the people of Ukraine and issued an appeal for prayer for peace in that country. They recalled the pope’s earlier statements for peace in Ukraine and said in a statement, signed by the council’s president, Archbishop Gintaras Grušas:

We, as shepherds of the European Continent, want to appeal to the leaders of the nations so that they do not forget the tragic world wars of the last century and so that international law, as well as the independence and territorial sovereignty of each country, will be defended. Together with the Holy Father, we want to call on governments to find ‘acceptable and lasting solutions’ in Ukraine based on dialogue and negotiation and without resorting to arms.

The statement concluded by asking Christians to pray for the gift of peace in Ukraine “so that those responsible may be filled with, and radiate, a peace that is ‘contagious’ and that the crisis will be overcome exclusively through dialogue.”