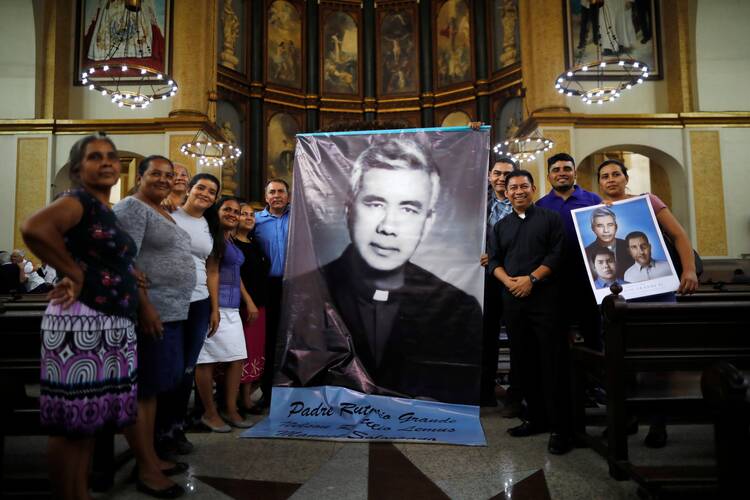 People pose with images of Rutilio Grande, S.J., following a Mass in his honor at a church in San Salvador, El Salvador, on Feb. 22, 2020. (CNS photo/Jose Cabezas, Reuters)

Rutilio Grande, S.J., who will be beatified on Jan. 22, was a deeply committed priest with extraordinary pastoral gifts. This was apparent particularly in his efforts to empower the laity and bring the spirit of the Second Vatican Council—as well as the Latin American Bishops’ Conference in Medellín, Colombia—to life in impoverished El Salvador during the lead-up to that country’s civil war. Not content to impose solutions from above, Father Grande was committed to what Pope Francis would later call “the culture of encounter.” Because of his efforts to raise the consciousness of the poor and advocate for land reform, he and two parishioners were gunned down by a death squad in 1977 less than one month after Óscar Romero had been installed as archbishop of San Salvador. Father Grande’s assassination had a profound effect on Archbishop Romero, who spent the rest of his life speaking boldly and prophetically against oppression until, he, too, was killed by a death squad.

Father Grande’s work was possible because of the care and treatment he received for his mental health issues. Though a less known part of his biography, this is highly relevant in an age when so many struggle with their mental health. According to the National Alliance on Mental Illness, one in five Americans suffers from a mental illness in any given year. Despite the vast scope of this crisis, which has been exacerbated by the Covid-19 pandemic, there is significant stigma around mental health care, particularly in the church.

Rutilio Grande is just the intercessor we need as we seek to bridge the gap between the beautiful theory of church teaching on mental health care and its actual practice.

Our last three popes have spoken frequently about the dignity of those struggling with mental health issues including depression and addiction, and Pope Francis has spoken positively about his own experience seeing a psychoanalyst. But that attitude of compassionate care has been slow to trickle down into the average parish, where there can still be a temptation to dismiss or over-spiritualize mental health issues in ways that implicitly or explicitly discourage medical care. Rutilio Grande is just the intercessor we need as we seek to bridge the gap between the beautiful theory of church teaching on mental health care and its actual practice.

The Jesuit historian Rodolfo Cardenal’s definitive biography of Father Grande describes in detail his two major mental health crises during his time in Jesuit formation, which are brought to life by letters and documents from the archives of the Central American Province of the Jesuits. The first crisis occurred while he was teaching at a Jesuit school in Panama. He was overwhelmed by the stress of his workload, first appearing passive and then speaking unintelligibly. He was admitted to a clinic, where he was diagnosed with catatonic schizophrenia, received treatment and recovered. Aware of his fragile health, Grande’s Jesuit community sent him to recuperate in El Salvador, and afterward his superiors were careful to take his needs into account when making his assignments. (He did better, for instance, in smaller communities than in large Jesuit houses.) Archival documents indicate that he was given extra time to complete his formation, and the vice provincial superior insisted that he be given an egg for breakfast every day and that he have access to the kitchen at all hours to regain his physical strength. He continued to see psychiatrists and receive medical care as arranged by his Jesuit brothers, who delighted in his recovery.

Rutilio Grande bore mental health issues as his personal cross. Now he can become a patron saint for all Catholics who seek and deserve mental health care.

Although several private letters written by fellow Jesuits (preserved in the archives) attest that some of them doubted that Grande had the capacity to complete his formation, no one told him that he was unfit to be a Jesuit. In fact, in their care for him, the Jesuit community beautifully embodied the Ignatian principle of cura personalis, or care for the whole person. They respected his dignity by working to meet his mental, physical and spiritual needs.

[Related: Burned out, overworked or depressed? Pope Francis is praying for you.]

The second crisis came before Father Grande’s ordination to the priesthood, when he was tormented by scrupulosity: He worried that his doubts about his vocation had made him unworthy to be a priest. Although he was reassured by his superiors, this fear gripped Father Grande for some time, until he began to understand his mental health issues as his personal cross and moved into a place of self-acceptance. That self-acceptance gave him the freedom to step wholeheartedly into his pastoral work and, eventually, to lay down his life for his people.

The medical treatment and extraordinary community care given to Father Grande restored him and made him capable of his great work. How impoverished the church would have been without his powerful witness! But the church still has much work to do in order to follow in the footsteps of the Jesuits of El Salvador who cared for Father Grande. In spite of the church’s merciful teaching on mental health care, people struggling with depression, anxiety or any of a host of other mental health issues are still being given the message that their conditions are shameful, that they should just pray harder, or that therapy and medication are sinful things to pursue. Imagine the saints that might have been, had they not been made to feel unworthy or unwelcome in the church.

As we work toward a more informed, inclusive and compassionate church, Rutilio Grande is a perfect patron for us, giving us a powerful reminder that mental health concerns are not a disqualification from holiness, from a fulfilling vocation or from a life lived in the depths of the mercy and compassion of God. All of us are called into communion with God. May we commit to building a church that allows us all to say yes. 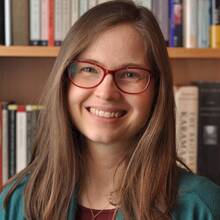 Cameron Bellm writes the Spirit & Verse column at Jesuits.org and is the author of No Unlikely Saints: A Mental Health Pilgrimage With Sacred Company. She lives in Seattle with her husband and two sons.