Cardinal Tobin: Refusing to deal with life’s complexity is a form of heresy. 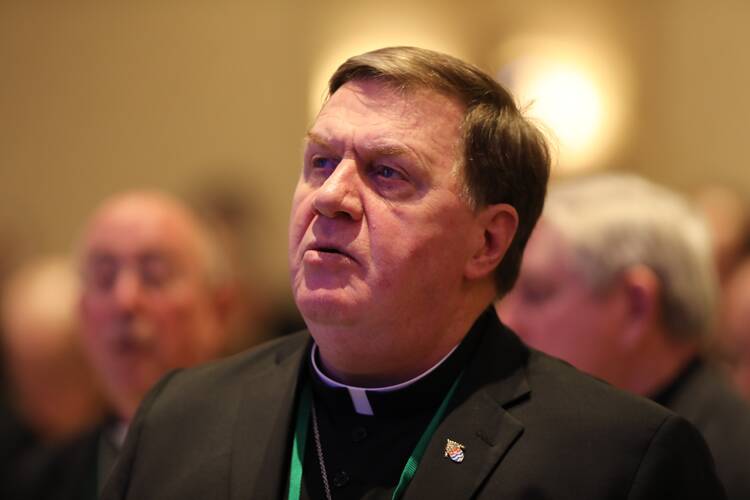 Cardinal Joseph W. Tobin of Newark, N.J., attends the opening prayer during the fall general assembly of the U.S. Conference of Catholic Bishops in Baltimore in this Nov. 12, 2018, file photo. (CNS photo/Bob Roller)

Critics who dismiss an ongoing Vatican effort to consult Catholics around the world, part of the pope’s efforts to reinvigorate church life, fail to understand how Francis is trying to reshape the church, one of his cardinal advisors said in a speech on Tuesday.

“Synodality is a way of being church, based on the idea, the ideal, that all the baptized are walking together with a shared attention to the Holy Spirit,” Cardinal Joseph Tobin, the archbishop of Newark, said in a keynote address to the Cathedral Ministry Conference, which is taking place this week in Chicago.

In recent days, some critics of the upcoming synod, which has received relatively little attention in the United States, complained on social media that some keywords associated with the synod planning process shared in a tweet from the U.S. Conference of Catholic Bishops seemed too corporate or jargony. At least one bishop weighed in, posting on his Twitter account, “If the synod process is to bear fruit, it has to focus on the person of Jesus Christ, Gospel values and a spiritual vision; and eliminate complex structures, mind-boggling instructions, and secular, corporate language.”

Some critics of the upcoming synod complained on social media that some keywords associated with the synod planning process seemed too corporate or jargony.

Without directly addressing that online controversy, Cardinal Tobin said that it is common for certain themes to emerge during the preparation periods leading up to a meeting of the Synod of Bishops.

Ahead of the 2012 synod, convened by Pope Benedict XVI to discuss evangelization, the cardinal said he noticed “discernment” was a key theme, used two dozen times in the preparatory document.

“I thought, how interesting that at this level of the church, people are recognizing that there are no pat solutions for the challenges the church faces today,” Cardinal Tobin said, “and that the synod is not simply there to rubber stamp something, but to [ask], what is God saying to the churches today?”

The 2023 synod of bishops will be devoted to the idea of synodality, which dioceses began preparing for last year.

Cardinal Tobin, who serves on the Vatican Congregation for Bishops, said Pope Francis has continued seeking answers to the question of synodality, and that he has emphasized similar themes.

“The longer and the farther we journey together, the more we encounter each other, the more everything becomes clearer,” he said. “Right now, accompanied by Francis, they’re the same words: mercy, joy, discernment, dialogue. And of all of them, the most misunderstood, in my experience, is synodality.”

In his talk, Cardinal Tobin recalled a meeting in 1960 between the French Jewish historian Jules Isaac and Pope John XXIII. Mr. Issac urged the pope to consider how the church had contributed to anti-Semitic attidues in Europe and its role in creating conditions that led to the Holocaust. That conversation helped lead to the promulgation of “Nostra Aetate” and the beginning of a period of reconciliation between the church and the Jewish people.

Cardinal Tobin said that listening deeply as part of the synodal process is “essential for our shared growth in the body of Christ.”

“What Pope John was able to do only was possible because he listened,” Cardinal Tobin said. “He listened to a voice that he would not have heard in all the Vatican or probably in any Catholic church at the time. He listened to somebody who had been deeply hurt.”

Cardinal Tobin said that listening deeply as part of the synodal process is “essential for our shared growth in the body of Christ.” That posture is “what Pope Francis sees clearly and advocates for openly as the model the church the Lord expects of us in this millennium.”

He cited the pope’s insistence about the church’s need to be on the literal and figurative peripheries and asked, “I wonder what voices can speak to the church today?”

He cited his own diocese’s outreach to young people, individuals in prisons and L.G.B.T. Catholics—a gesture, he said, “that cost us a lot.”

“But it’s a cost we must pay, and it reaps tremendous benefits,” he said.

“My favorite definition of heresy is a refusal to deal with complexity,” he said. “If you look at the heresies of the church, the great heresies, they couldn’t accept one thing or the other, and they didn’t want to live with the tension. There is an essential tension and a necessary tension in so much of our life.”

“If you destroy that tension,” he continued, “then the church, the sacraments, the Word of God becomes something else. It is no longer the Word of God.”

The cardinal said he is hopeful that churches can open their doors and listen deeply, but he is also aware that the process may not be easy.

“We have a long way to go in coding into our ecclesial DNA, this way of being church,” he said.