Is Pope Francis’ Synod on Synodality bound to disappoint—or will it renew the church? 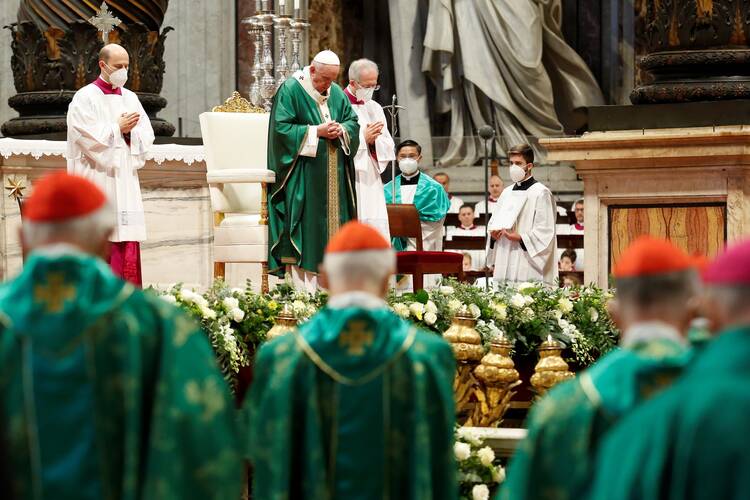 Pope Francis celebrates Mass to open the three-year synodal process that will lead up to the world Synod of Bishops in 2023, in St. Peter's Basilica at the Vatican on Oct. 10, 2021. (CNS photo/Remo Casilli, Reuters)

Pope Francis has begun a multi-year process for the entire church, what he has called “a synod on synodality.” In his talks and in the preparatory documents, he has explained the unusual term “synodality” very simply by retrieving its Greek roots. “Synodality,” as he describes it, is being syn-hodos, on the road together. The Holy Father wants this vision of the church being on the road or journey together to come alive.

When I first heard about synodality, the concept held a strong appeal for me. I saw it moving the church beyond the usual and tired constructs of institution, organization and bureaucracy. I saw it underscoring an experience of church that included a greater sense of community and connection in the unfolding of history. The Second Vatican Council had captured this with its striking image of the church as the pilgrim people of God in “Lumen Gentium.” So far, synodality seemed good, indeed, very good.

Then I began to have questions and hesitations.

The concept of synodality held a strong appeal for me. I saw it moving the church beyond the usual and tired constructs of institution, organization and bureaucracy.

In the preparatory documents, some of the claims for a synodal church seem to be noble aspirations, but also a bit overdrawn. For example, one document suggested that a synodal church would contribute to the reconstruction of democracy in our world. In a sense, I could write that off to the enthusiasm of the people drafting the documents. But a deeper and more fundamental question remained.

A synod on synodality is a process about a process. And that stuck with me. A process about a process seemed to be without content. Where would this lead us? The questions that are posed by the preparatory documents to Catholics throughout the world probe process, not content. The questions about listening attentively, speaking openly and acting boldly are good questions. At the same time, they also seem to suffer from a certain vagueness. Where is a synod on synodality leading us? We are on the road together, but where is that road taking us? What is the destination? In the end, are we bound to be disappointed?

As I sat to reflect and pray over this, I could not get a precise fix on this “process about a process” until I recalled the larger context. Pope Francis is our first post-conciliar pope. He was ordained in 1969, four years after Vatican II concluded. He was formed in the renewal called for by the council and was steeped in its hope. With that reality in mind, the council then became my interpretative key to understand the remarkable synod on synodality that he was convoking.

On Dec. 25, 1961, exactly 60 years ago, Pope Saint John XXIII issued an apostolic constitution, “Humanae Salutis,” and so convoked Vatican II. The key passage of that constitution that sets in motion the renewal begun in the council and that still remains to be fully realized can be found near the beginning:

Today the Church is witnessing a crisis under way within society. While humanity is on the edge of a new era, tasks of immense gravity and amplitude await the Church, as in the most tragic periods of its history. It is a question in fact of bringing the modern world into contact with the vivifying and perennial energies of the gospel…

Pope Saint John XXIII had seen the crisis firsthand in the 20th century, with its two world wars, multiple genocides, the development of weapons of mass destruction and the fearsome inequities that allowed some to prosper and many to languish in abject poverty. The church, he saw, had an urgent mission to bring the world “into contact with the vivifying and perennial energies of the gospel.” And the council would address how that might be accomplished. In his opening address on Oct. 11, 1962, he clearly delineated the scope of the council. It was not about doctrine. He said that everything in the council was to be measured “in forms and proportions of a magisterium which is predominantly pastoral in character.” In other words, everything in the council and the renewal that followed it would hinge on reclaiming the church’s mission in the world.

Pope John XXIII saw that the church had an urgent mission to bring the world “into contact with the vivifying and perennial energies of the gospel.”

If we fast forward to 2021, some 56 years after the close of Vatican II, we can rightly point to many significant elements of renewal that have taken hold in the church. At the same time, we ought to candidly admit our own limited and incomplete embrace of the vision of John XXIII as he convoked the council. Are we now the effective salt, light and leaven that bring “the modern world into contact with the vivifying and perennial energies of the gospel?” In some measure perhaps we are, but certainly not to the full measure of what the world needs. And it is that gap that I think Pope Francis wants to address by summoning the whole church to a synod on synodality. Let me explain.

The French patristic scholar of the Didache, Jean-Paul Audet, identified three dimensions of church: an organization-institution, a community-communion and a movement-mission. If we consider our current operational assumptions and the general perceptions of the Catholic Church, the most prominent dimension is organizational-institutional. It seems to be the most evident. At the same time, in ways which are sometimes subtle and sometimes not so subtle, a de-institutionalizing movement is occurring.

Here are some examples drawn mainly in our United States context but not limited to this country. The key force of religious institutional life for matters of education, health care and social services were for many years women religious, and they are not as present and available as they once were. The sexual abuse crisis coupled with evident clericalism triggered a crisis of institutional credibility and diminished institutional reliability. The continued diminishment in the numbers of the faithful participating in the organized life of the church also bear witness to a de facto process of deinstitutionalization.

Pope Francis seems to be weaning us off of our dependence on structures, organizations and institutions.

If deinstitutionalization is real, and if we have in fact banked heavily on our institutional life to carry forward the mission to bring “the modern world in contact with the vivifying energies of the gospel,” then we need a change of plan. I would propose that, in his own way, this is what Pope Francis is offering us by calling for a synod on synodality. He seems to be weaning us off of our dependence on structures, organizations and institutions. If so, then his three main words for the synod—communion, participation, mission—make perfect sense. If we are to bring those gospel energies to the world in need, then we must be together, in communion, and be clear about our identity in Jesus Christ. Our participation or involvement with both the gospel and the world enables us to be present where we need to be present. Finally, this movement frees us to embrace our purpose or mission more readily. To go back to the words of John-Paul Audet, we will be less organizational, more focused on community, and—for that—truer to the movement or mission that we are in the world.

If we can return to the preparations for the synod on synodality, I have one word of advice: Reframe the basic question.

The vademecum (or handbook) for the synod says: “The fundamental question that guides this consultation of the People of God…is the following: A synodal Church in announcing the gospel, ‘journeys together’: How is this ‘journeying together’ happening today in your particular Church? What steps does the Spirit invite us to take in order to grow in our ‘journeying together?’”

These are good questions, but they are limited to the process. An even more fundamental question could draw us into the content of our journeying together. Could we ask, “As God’s pilgrim people journeying together, how can we more effectively bring the life-giving power of the gospel to a world so desperately in need of it?” That question would more closely correspond to the vision of Pope John XXIII and, I believe, of Pope Francis as well. 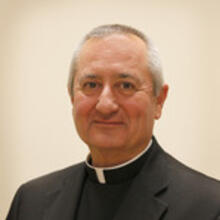 The Rev. Louis J. Cameli, a priest of the Archdiocese of Chicago, is Cardinal Blase J. Cupich's delegate for formation and mission.