The message of the Epiphany: God kills hate with love. 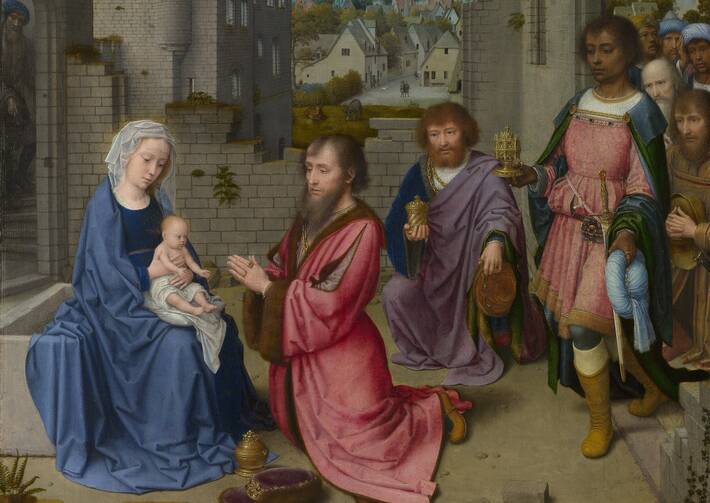 A Reflection for the Feast of the Epiphany

At the close of “Romeo and Juliet,” with both young lovers dead, the Prince of Verona delivers the play’s lesson.

Where be these enemies? Capulet, Montague,
See what a scourge is laid upon your hate,
That heaven find means to kill your joys with love.
And I, for winking at your discords, too
Have lost a brace of kinsman. All are punishèd (5.3.290-294).

It is a terrifying and telling indictment. If you hate deep enough and long enough, even love will turn against you!

St. Matthew’s story of the Magi is the converse: Heaven finds means to kill our hate with love. Remember that Matthew writes to Jewish Christians, wanting them to understand that Christ is both the fulfillment of their faith and the radical openness of God to all people. That is why he also tells a tale of reversal.

“Magi” were originally members of the Median and Persian priestly caste, who were tasked to foretell the future, read omens and interpret dreams. Matthew’s Jewish Christian audience would remember that they competed with young Daniel to be advisors to the King of Babylon.

Matthew writes to Jewish Christians, wanting them to understand that Christ is both the fulfillment of their faith and the radical openness of God to all people.

In the Book of Numbers, the King of the Moabites hires just such a seer, Balaam, to look upon the Israelites and to curse them (Chapter 24). But each time he tries to do this, God commands Balaam to bless this people. In his final attempt, the seer is compelled to pronounce the coming of a great King of Israel:

In his infancy narrative, St. Matthew’s Gospel is contained in miniature. Like Hamlet, there is a play within the play. Two responses are made to the Messiah, even in his infancy and certainly in his ministry. Some will believe and embrace. Others will reject and, of necessity, seek to crush, even to execute.

Two responses are made to the Messiah. Some will believe and embrace. Others will reject and, of necessity, seek to crush, even to execute.

Herod converted to Judaism and bought his crown. He readily allies with those who oppose this newborn king, “the chief priests and the scribes of the people” (2:4). Here they play the foul role of reading Scripture for spite. Where is the Christ child to be born?

In Bethlehem of Judea,
for thus it has been written through the prophet:
“And you, Bethlehem, land of Judah,
are by no means least among the rulers of Judah;
since from you shall come a ruler,
who is to shepherd my people Israel” (2:6).

In contrast, the magi, who are gentiles, become “coheirs, members of the same body, and copartners in the promise in Christ Jesus through the gospel” (Gal 3:6).

They prostrated themselves and did him homage.
Then they opened their treasures
and offered him gifts of gold, frankincense, and myrrh (2:11).

Remember that the evangelist is a Jew, writing to Jewish Christians. His purpose is not to stir anti-Semitism. It is not even to place one set of Jews in opposition to another. It is to remind all future disciples that they must be reluctant to draw lines of division. Further, they should expect that God, in the might of his love, will wash away those lines.

Romeo knows his love with kill him. Yet still he loves. We fear the same, but St. Matthew tells us that he who hath the steerage of our course will slay death with love.

Even though “darkness covers the earth and thick clouds cover the peoples,” for all their faults, Israel and the church both hear:

Rise up in splendor, Jerusalem! Your light has come,
the glory of the Lord shines upon you.
upon you the Lord shines,
and over you appears his glory.
Nations shall walk by your light,
and kings by your shining radiance.
Raise your eyes and look about;
they all gather and come to you:
your sons come from afar,
and your daughters in the arms of their nurses (Is 60:1, 2b, 3-4).

You see, we are all magi, chasing and calculating our way through the world. The question is whether we will allow God to do something new.

Early in the play, though he knows her to be an enemy, Romeo surrenders to love, engaging in a bit of prophecy himself.

I fear too early, for my mind misgives
Some consequence yet hanging in the stars
Shall bitterly begin his fearful date
With this night’s revels, and expire the term
Of a despisèd life, closed in my breast,
By some vile forfeit of untimely death
But he that hath the steerage of my course
Direct my sail! (1.4.106-113)

Romeo knows his love with kill him. Yet still he loves. We fear the same, but St. Matthew tells us that he who hath the steerage of our course will slay death with love.