Pope Francis tells Roman Curia ‘Be humble, not proud’ in another humdinger of a Christmas talk 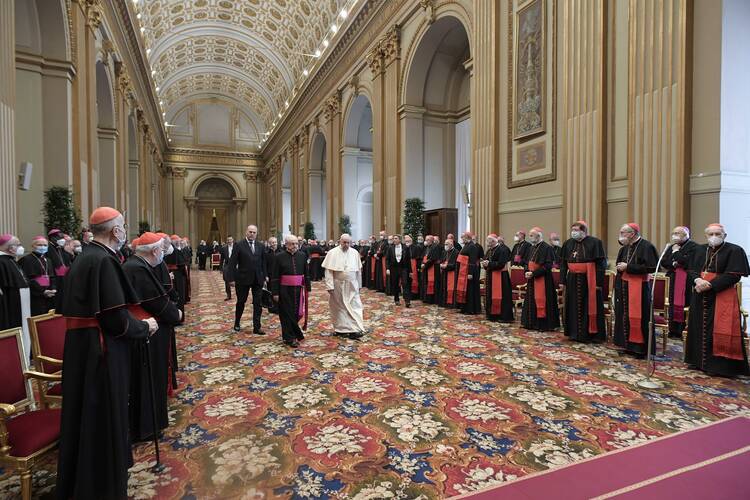 Pope Francis arrives for an audience to exchange Christmas greetings with members of the Roman Curia in the Apostolic Palace at the Vatican Dec. 23. (CNS photo/Vatican Media)

Pope Francis delivered another humdinger of a Christmas talk to the Roman Curia this morning, Dec. 23. He called on its members to “be humble, not proud,” and said that at this time when the whole church is called to be synodal, they must be the first to adopt a synodal attitude marked by cooperation, communion and mission.

“Humility” is not in fashion nowadays, but it is the one word that best “expresses the whole mystery of Christmas,” Francis said as he addressed the curia for the ninth time since becoming pope. His talk was not only challenging, it was also profound and forward looking, aimed at promoting a synodal culture, rooted in humility, at the heart of the central government of the Catholic Church.

The pope’s talk was aimed at promoting a synodal culture, rooted in humility, at the heart of the central government of the church.

Speaking in the hall of Benedictions, he reminded the officials of the curia that “Humility was the door of entry” for Jesus’ into the world “and he invites us to enter through it.” He told them, “We are all called to be humble” and “if it is true that without humility we cannot encounter God, and we cannot experience salvation, it is also true that without humility we cannot even encounter our neighbors, our brothers and sisters that live next door.”

He linked humility to the two-year synodal journey that started on Oct. 17, and said, “in this case too, humility alone can enable us to encounter and listen, to dialogue and discern” because “if we remain enclosed in our convictions and experiences, in the hard shell of our own thoughts and feelings, it will be difficult to be open to that experience of the Spirit” which “is born of the conviction that we are all children of ‘one God and Father of all.’”

He contrasted clericalism—“a temptation that daily spreads in our midst and makes us keep thinking of a God who speaks only to some, while the others must only listen and obey”—to the synod which, he said, “is the experience that makes us all feel members of a larger people: the holy and faithful People of God, and thus disciples who listen and, precisely by virtue of that listening, can also understand the will of God, which is always revealed in unpredictable ways.”

He told them, “Synodality is a ‘style’ to which we must be converted, especially those of us who are present and all those who serve the universal church by their work for the Roman Curia.”

Speaking in the hall of Benedictions, Pope Francis reminded the officials of the curia that “Humility was the door of entry” for Jesus’ into the world.

Pope Francis said the Roman Curia “is not merely a logistical and bureaucratic instrument for meeting the needs of the universal church, rather it is the first organism called to give witness and, precisely for this reason, it becomes more authoritative and effective when it takes up in the first person the challenges of synodal conversion to which it too is called. The organization that we must adopt is not that of a business type, but of an evangelical nature.”

For this reason, “if the Word of God reminds the whole world of the value of poverty,” he said, “we, the members of the curia, must be the first to commit ourselves to being converted to a style of sobriety. If the Gospel proclaims justice, we must be the first ones to seek to live transparently, without favoritisms or cliques. If the church follows the path of synodality, we must be the first to be converted to a different style of working, of collaboration and communion.” He emphasized that “all this is possible only through the path of humility.”

He recalled that in his talk last October at the opening of the synod he had used three keywords: “participation, communion and mission,” These same words “are three requirements that I would like to indicate as a style of humility that we should aim at here in the curia,” the pope said “The ways to make the path of humility a concrete path to follow in practice.”

He elaborated on each way, starting with “participation” which, he said, “ought to be expressed through a style of co-responsibility.” While there is a diversity of responsibilities because of the different roles and ministries members of the curia have, nevertheless each one should feel co-responsible for the work and not simply live a depersonalized experience executing the programs devised by someone else.

Without this humble attitude, “we become nothing more than strangers working in the same place, or competitors looking to advance themselves.”

“Many of us work together,” said Pope Francis. But “what builds communion is the ability to pray together, to listen together to the Word of God, to construct relationships that go beyond that of mere work and strengthen beneficial relations by helping each other” and to recognize “the diversity of gifts” that the Spirit has given.

Without this humble attitude, “we become nothing more than strangers working in the same place, or competitors looking to advance themselves,” he said. “Worse still,” he added, we forge relations through complicity, “for personal interests, forgetting the common good that holds us together.” He warned that complicity “creates divisions, factions and enemies” and seeks an external result, whereas cooperation demands “the magnanimity to accept our own partiality and to be open to work in a group, even with people who do not think as we do.” And this for the benefit of the whole People of God “whom we serve.”

Referring to the third way—“mission”—Francis said, “this is what saves us from falling back on ourselves.” He told his curial audience, “only the heart that is open to mission ensures that all that we do within and to the outside is always marked by the regenerating power of the call of the Lord.”

Pope Francis emphasized that “Mission always involves passion for the poor, for those who are ‘in need.’’’

Pope Francis emphasized that “Mission always involves passion for the poor, for those who are ‘in need,’ not only of material things, but also spiritual, emotional and moral. Those who hunger for bread and those who hunger for meaning are equally poor. The church is summoned to reach out to every form of poverty. The church is called to preach the Gospel to everyone, since all of us are poor; all of us are, in one way or another, needy. But the church also reaches out to the poor because we need them: we need their voice, their presence, their questions and criticisms. A person with a missionary heart feels the absence of his brother or sister, and, like a beggar, accosts him or her.”

Looking out at his audience, he said, “Mission makes us vulnerable. It helps remind us that we are disciples and it makes us rediscover ever anew the joy of the Gospel.”

He added, “Participation, mission and communion are the characteristics of a humble Church, one attentive to the voice of the Spirit and not self-centered.”

Pope Francis devoted the first part of his talk to a reflection on humility. He admitted “it is not easy to understand what humility is” and explained that “it is the effect of a change that the Spirit himself brings about in us in our daily lives.” He told the men and women officials of the Roman Curia, “if we forget our humanity, we live off the glitter of our armor,” which he sees as spiritually dangerous.

Pope Francis, from the very beginning of his pontificate, has warned cardinals, bishops and priests against what the famous French Jesuit theologian, Henri de Lubac, called “spiritual worldliness.” He dedicated five paragraphs (Nos. 93-97) in his programmatic document, “Evangelii Gaudium” (“The Joy of the Gospel”) to this topic, and quoted No. 96 in his talk today. Francis called it “the dangerous temptation” which “is hard to unmask, because it is concealed by everything that usually reassures us: our role, the liturgy, doctrine, religious devotion.”

He described “humility” as “the ability to know how to live our humanity without despair, but with realism, joy and hope, this humanity loved and blessed by the Lord,” and “to understand that we should not be ashamed of our frailty.”

He recalled “pride is the opposite to humility;” and the proud “enclosed in their little world, have neither past nor future, roots or branches, and live with the bitter taste of a melancholy that weighs on their hearts…. They simply repeat, grow rigid, and enclose themselves in that repetition, feeling certain in what they know and fearful of anything new because they cannot control it; they feel destabilized, because they have lost their memory.”

When Pope Francis concluded his talk, his audience applauded warmly. He then announced he was giving them a gift of three books and greeted each person individually.