While Romans slept, Pope Francis prayed at the Spanish Steps for the world’s sick and suffering 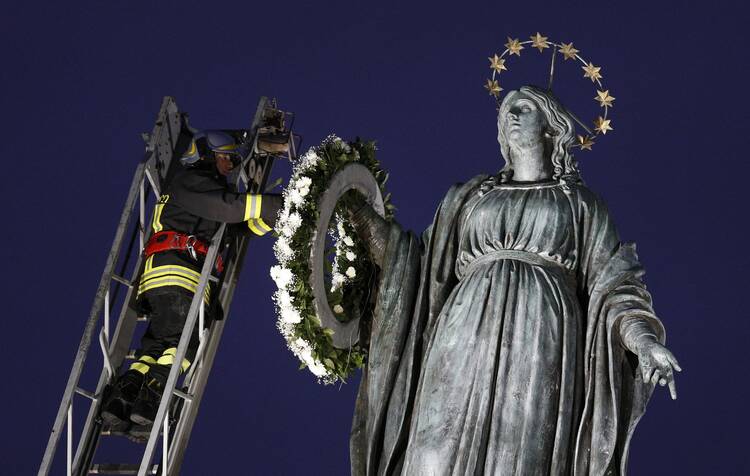 A firefighter places a wreath on a tall Marian statue overlooking the Spanish Steps in Rome Dec. 8, 2021, the feast of the Immaculate Conception. (CNS photo/Paul Haring)

While Romans slept and darkness still covered the eternal city, Pope Francis left the Vatican this morning to pray in private before the statue of Our Lady of the Immaculate Conception for three different categories of people.

He arrived at the foot of the statue at 6:15 a.m. and prayed, first, for “the miracle of cure for the many sick people” in today’s world.

Though the Vatican statement that broke the news did not say so, he will likely have included the countless numbers of people suffering from Covid-19 in the world today in his prayer. There have been nearly 265 million confirmed cases reported in the world and over 5.2 million deaths, with a 79 percent increase in new weekly cases in Africa and a 21 percent increase in the Americas.

Pope Francis arrived at the foot of the statue of Our Lady of the Immaculate Conception at 6:15 a.m. and prayed for “the miracle of cure for the many sick people” in today’s world.

Finally, he invoked Our Lady’s intercession “for the conversion and the melting of the hearts of stone of those who build walls to distance themselves from the sufferings of others.” He had spoken out strongly about the building of walls and barbed wire fences to prevent migrants from entering countries during his recent visit to Cyprus and Greece. Such barriers have been erected in Hungary, Poland and many other places.

We are in the age of walls and barbed wire. To be sure, we can appreciate people’s fears and insecurities, the difficulties and dangers involved, and the general sense of fatigue and frustration, exacerbated by the economic and pandemic crises. Yet problems are not resolved and coexistence improved by building walls higher, but by joining forces to care for others according to the concrete possibilities of each and in respect for the law, always giving primacy to the inalienable value of the life of every human being. For as Elie Wiesel also said: “When human lives are endangered, when human dignity is in jeopardy, national borders become irrelevant.”

The tradition of praying at the Spanish Steps dates back to at least 1953, when Pius XII prayed at the foot of the bronze statue on Dec. 8, the feast of Our Lady of the Immaculate Conception.

The statue was erected in 1857 following the proclamation of the dogma of the Immaculate Conception by Pius IX on Dec. 8, 1854. The dogma asserts that “from the first moment of her conception, the Blessed Virgin Mary was, by the singular grace and privilege of Almighty God, and in view of the merits of Jesus Christ, Savior of Mankind, kept free from all stain of original sin.”

The feast day is a national holiday in Italy, and thousands of people usually gather at the Spanish Steps to be present for this public act of veneration by the pope. That was not possible in 2020, however, because of the national restrictions provoked by the pandemic, and so Francis went there to pray early morning last year.

The tradition of praying at the Spanish Steps dates back to at least 1953, when Pius XII prayed at the foot of the bronze statue on Dec. 8, the feast of Our Lady of the Immaculate Conception.

This year, too, to avoid attracting large crowds and the risk of spreading the virus, Francis canceled the public event. The pope placed a basket of white roses at the foot of the 39-foot column on which the statue is placed, and Roman firefighters placed a wreath on Mary’s outstretched arm. When the Vatican on Nov. 25 announced the cancelation of this year’s public event, it said the pope would instead “pray in private” on this day and invoke the help of Our Lady “to protect the Romans, the city in which they live, and the sick who need Her maternal protection everywhere in the world.”

After praying before the statue, Pope Francis was driven to the Basilica of St. Mary Major where he continued his prayer in front of the icon of Our Lady “Protector of the Roman People.” When he finished his prayer, he returned to the Vatican.

Reciting the Angelus at midday from the papal apartment, Francis spoke about Our Lady and recalled his recent visit to Cyprus and Greece. He also reminded people that the year dedicated to St. Joseph, the patron of the universal church, concluded today.