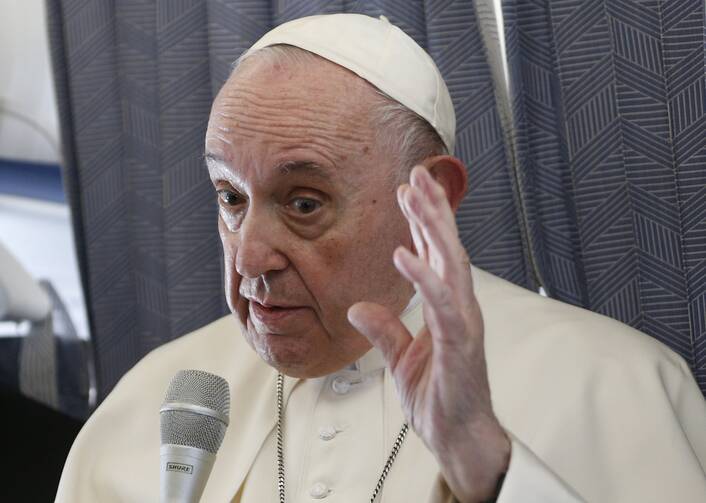 Pope Francis answers questions from journalists aboard his flight from Athens, Greece, to Rome Dec. 6, 2021. The pope was concluding a five-day visit to Cyprus and Greece. (CNS photo/Paul Haring)

The pope’s answer was given in response to one of several questions from five journalists on the 90-minute flight. Francis also revealed the possibility that he could meet Patriarch Kirill of Moscow for a second time and said plans for this will be discussed next week.

Pope Francis revealed for the first time that the archbishop had given “small caresses and massages” to his secretary, which “was a sin” but “not the gravest of sins.” He said, however, that the “gossip of many people” who did not know the facts, had taken away the archbishop’s “good name” and thus his ability to govern the Archdiocese of Paris.

Pope Francis revealed for the first time that the archbishop had given “small caresses and massages” to his secretary, which “was a sin” but “not the gravest of sins.”

Francis compared the early Christian church—“a normal church”—which was able to accept Peter who committed the gravest of sins in denying Christ, with the church of today that “pretends” to consider its bishop “a saint,” when in fact he is a sinner “like you and me.”

He gave this response in answer to the question from Cecile Chambraud, the journalist from Le Monde, the leading French daily.

Le Monde: You accepted the resignation of the archbishop of Paris, Monsignor Aupetit. Why?

Second question, after an independent report on sexual abuse in the church in France, the bishops responded that there is an institutional responsibility to the victims, and they admitted the systemic nature of this violence. You have heard the declarations of the French bishops. What significance does this have for the universal church? Will you receive the members of this independent commission?

Pope Francis: I will start with the second question. When these studies are done, we have to be attentive with the interpretation because a period of time has passed. When we study a period so long—70 years ago—there is a risk of confusing the way of reading a problem [that occurred] 70 years before the other. So I want to say first of all this as a principle: A historic period needs to be interpreted with the hermeneutic of that epoch, not with that of ours. For example, take the case of slavery: We say the abuses of 100 years ago were a brutality, but the way they understood it then was not the same as today.

There is another hermeneutic in the case of the cover-up of the abuse in the church. The way that is done—sadly today in the church [and] also in the neighborhoods—we say now, “No, we cannot cover up.” We must always interpret things with the hermeneutic of that time, not ours. That is the first principle.

I have not read the [French] report [on abuse], but I have listened to the comments of the French bishops. They will come to Rome this month, and I will ask them to explain things to me.

Now to the question of Aupetit: I ask, was what he did so serious (grave) that he had to give me his resignation? Can someone answer me, what did he do?

Le Monde: We don’t know. Why did you accept his resignation? [Was it] because of a question of governance or something else?

Francis: If we don’t know the accusation, we cannot condemn. What was the accusation? Who knows? It’s ugly (brutto) [to condemn this way]. Before I respond, I say this: Do the investigation because it is dangerous to say [things]. He was condemned. Who condemned him? Public opinion, gossip. We don’t know...if you know, [then] say it. Otherwise, I cannot respond.

He cannot govern because he has lost his good name—not because of his sin, and it is a sin, as was that of Peter and as is mine and yours, but because of the gossip of people.

And you do not know because it was a failure on his part, a failure against the Sixth Commandment but not a total one—caresses and massages that he gave his secretary. This is the accusation. This is the sin, but not one of the most grave sins, because the sins of the flesh are not the gravest sins. The gravest ones are those that have a more angelic [aspect]: pride, hate.

Thus, Aupetit is a sinner, as I am also. I don’t know if you feel to be [a sinner], perhaps, as Peter was, the bishop on whom Jesus Christ founded the church. How is it that the community of that time accepted a sinner bishop, and he carried sins of such an angelic nature, such as to deny Christ! [It accepted Peter] because it was a normal church. It was accustomed to feel itself a sinner always, all of them [felt so]; it was a humble church.

One sees that our church is not used to having a sinner bishop. We pretend our bishop is a saint.... [But] we are all sinners. But this gossip grows and grows and grows, and it takes away the good name of a person. No, he cannot govern because he has lost his good name—not because of his sin, and it is a sin, as was that of Peter and as is mine and yours, but because of the gossip of people.