Remembering Sister Megan Rice: the ‘Joan of Arc’ of the anti-nuclear movement 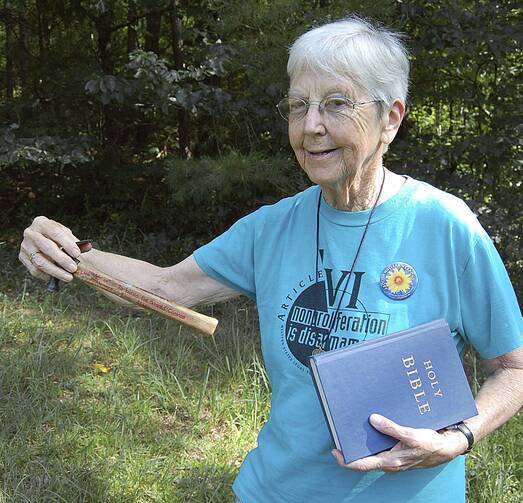 After Megan Rice, S.H.C.J., died on Oct. 10 at the age of 91, her fellow sister, Carroll Juliano, S.H.C.J., said she “lived her life with love full of action and zeal,” a zeal that was the product of a community of inspirational influence.

She was once called a “Joan of Arc figure” by the Los Angeles Catholic Worker for her willingness to be arrested dozens of times at anti-nuclear protests, most famously in 2012 when she and associates trespassed at the Y-12 nuclear facility in Oak Ridge, Tenn. Sister Rice reached an inner area of the nuclear plant unscathed because “we were led miraculously,” she told reporters.

Sister Megan Rice at trial: “Please have no leniency on me. To remain in prison for the rest of my life would be the greatest honor you could give me.”

Having resolved not to harm any living thing during the protest, she vowed that if her group were attacked by guard dogs inside the complex, she would not raise her hands in self-defense, according to The Washington Post. Waiting to be handcuffed, she and her fellow protestors sang “This Little Light of Mine.”

Interviewed in the federal detention facility in Ocilla, Ga., she was asked if she feared spending the rest of her life in prison. Her selfless reply: “I have no family or dependents, and I am really not going to live that much longer.”

Indeed, at the ensuing trial she advised the judge: “Please have no leniency on me. To remain in prison for the rest of my life would be the greatest honor you could give me.” She also explained to the court, “We had to come to this facility to call it to transformation.”

The possibility of such transformations was instilled in Sister Rice at an early age. Her father, Frederick Rice, was an obstetrician and a gynecologist and taught at New York University, after serving in the New York National Guard’s 69th Regiment, known as the “Fighting Irish.” Dr. Rice also served on a family life committee for the Archdiocese of New York. Her mother, Madeleine Hooke, had her graduate thesis, American Catholic Opinion in the Slavery Controversy, published by Columbia University Press in 1944.

Both her parents were friends of Dorothy Day and hosted her in their Morningside Heights apartment. By age 18, Sister Rice had already decided to follow the example of her older sister, Alessandra, who took religious vows after attending Barnard College. The profound empathy she had seen her parents show toward African Americans made her want to go to Africa to teach. She had already begun to study at St. Walburga’s Academy of the Society of the Holy Child Jesus with Mary Laurentina Dalton, S.H.C.J., a pioneering instructor who encouraged her pupils to teach in Nigeria.

In order to teach in Nigeria, Sister Rice was required to obtain a graduate degree. She opted for a master’s degree in cellular biology, in which she used radioactive isotopes and learned about the effects of nuclear radiation. She was made further aware of radiation’s effects from her uncle Walter G. Hooke, who served as the driver for Paul Aijirō Yamaguchi, the archbishop of Nagasaki, Japan, after World War II; in that role he witnessed the devastation caused by the U.S. atomic attack on the city.

By 1977, Sister Rice was working in religious education in Nigeria, where she remained until 1986; starting in 1990, she taught in northern Ghana. In between these duties, while caring for her elderly mother in New York, Sister Rice would bring her mother along to protests, like the American Peace Test March in 1988, a nonviolent action campaign to protest nuclear weapon development at the Nevada Test Site near Las Vegas.

Sister Rice was arrested over a dozen times in acts of civil disobedience, including anti-nuclear weapons activism.

She eventually retired from missionary work due to the aftereffects of malaria and typhoid. Afterward, Sister Rice was arrested over a dozen times in acts of civil disobedience, including anti-nuclear weapons activism. In the 1990s, she was repeatedly jailed for trespassing during protests against torture at the U.S. Army’s School of the Americas (now the Western Hemisphere Institute for Security Cooperation) at Fort Benning, Ga., and served two six-month prison sentences.

Sister Rice was a proponent of the writings of Seymour Melman, a Columbia University professor of industrial engineering and operations research who wrote extensively on “economic conversion” from military to civilian productivity by military industries and facilities. For her, putting faith in weapons was simply idolatry, since armaments were false gods, fabricated for profit.

“It is incredible to consider how the bravery of this small, smiling, unassuming woman in standing up to the entirety of the U.S. military-industrial complex could bring so much awareness to the devastation our nation’s idolatry of nuclear weapons inflicts on people here in the U.S. and around the world,” Johnny Zokovitch, executive director of Pax Christi USA, said in a statement after her death. “All of Pax Christi USA grieves at her passing, but we give thanks for her witness, for her life and for the challenge that she issued by standing up nonviolently for a better world for all of us.”