Pope Francis: Evangelization becomes dangerous when the church imposes one culture on a diverse world 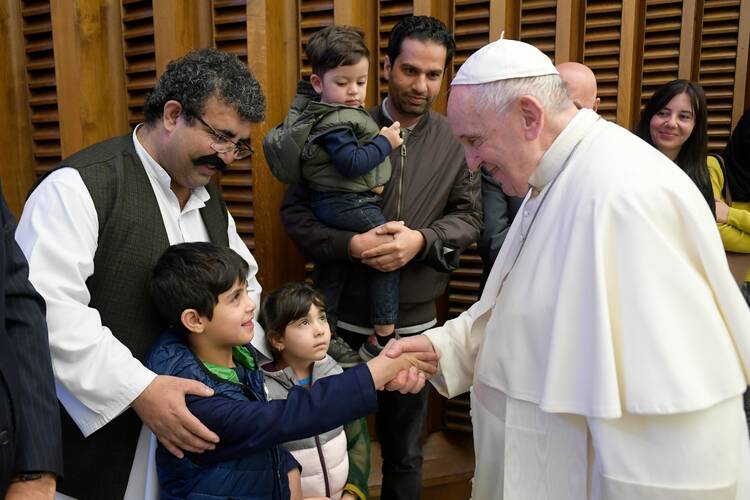 Pope Francis greets a child as he meets families who fled from Afghanistan, during his general audience in the Paul VI hall at the Vatican Oct. 13, 2021. (CNS photo/Vatican Media)

Below is the text of Pope Francis’ weekly Wednesday audience, delivered on Oct. 13, 2021.

In our itinerary of catechesis on the Letter to the Galatians, we have been able to focus on what was for Saint Paul the core of freedom: the fact that, with the death and resurrection of Jesus Christ, we have been freed from the slavery of sin and of death. In other words, we are free because we have been freed, freed by grace—not by payment, freed by love, which becomes the supreme and new law of Christian life. Love: We are free because we were liberated freely. This, in fact, is the key point.

Today I would like to emphasise how this novelty of life opens us up to welcoming every people and culture, and at the same time opens every people and culture to a greater freedom. In fact, Saint Paul says that for those who follow Christ, it no longer matters if they are Jewish or pagan. The only thing that counts is “faith working through love” (Gal 5:6). To believe that we have been freed, and to believe in Jesus Christ who freed us: this is faith working through love.

Paul’s detractors—those fundamentalists who had arrived there—attacked him over this novelty, claiming that he had taken this position out of pastoral opportunism, or rather to “please everyone,” minimizing the demands received from his narrower religious tradition. It is the same argument of the fundamentalists of today: history always repeats itself. As we can see, the criticism of every evangelical novelty is not only of our time, but has a long history behind it.

We are free because we have been freed, freed by grace—not by payment, freed by love, which becomes the supreme and new law of Christian life.

Paul, however, does not remain silent. He responds with parrhesia – it is a Greek word that indicates courage, strength – and he says, “Am I now seeking the favour of men, or of God? Or am I trying to please men? If I were still pleasing men, I should not be a servant of Christ” (Gal 1:10). Already in his first Letter to the Thessalonians he had expressed himself in similar terms, saying that in his preaching he had never used “words of flattery … or a cloak for greed; … nor did we seek glory from men” (1 Th 2:5-6), which are the paths of “faking”; a faith that is not faith, it is worldliness.

Paul’s thinking yet again shows an inspired depth. To welcome faith for him involves renouncing not the heart of cultures and traditions, but only that which may hinder the newness and purity of the Gospel. Because the freedom obtained through the death and resurrection of the Lord does not enter into conflict with cultures or with the traditions we have received, but rather introduces into them a new freedom, a liberating novelty, that of the Gospel.

Indeed, the liberation obtained through baptism enables us to acquire the full dignity of children of God, so that, while we remain firmly anchored in our cultural roots, at the same time we open ourselves to the universalism of faith that enters into every culture, recognizes the kernels of truth present, and develops them, bringing to fullness the good contained in them. To accept that we have been liberated by Christ—his passion, his death, his resurrection—is to accept and bring fullness also to the different traditions of each people. The true fullness.

How many errors have been made in the history of evangelization by seeking to impose a single cultural model! Uniformity as a rule of life is not Christian! Unity yes, uniformity no!

In the call to freedom we discover the true meaning of the inculturation of the Gospel. What is this true meaning? Being able to announce the Good News of Christ the Savior respecting the good and the true that exist in cultures. It is not easy! There are many temptations to seek to impose one’s own model of life as though it were the most evolved and the most appealing. How many errors have been made in the history of evangelization by seeking to impose a single cultural model! Uniformity as a rule of life is not Christian! Unity yes, uniformity no! At times, even violence was not spared in order to make a single point of view prevail. Think of wars.

In this way, the Church has been deprived of the richness of many local expressions that the cultural traditions of entire peoples bring with them. But this is the exact opposite of Christian freedom! For example, I am reminded of the approach to the apostolate established in China with Father Ricci, or in India with Father De Nobili… [Some said] “No, this is not Christian!” Yes, it is Christian, it is in the culture of the people.

In short, Paul’s vision of freedom is entirely enlightened and rendered fruitful by the mystery of Christ, who in his incarnation—as the Second Vatican Council recalls—united himself in a certain way with every person (cf. Pastoral Constitution Gaudium et spes, 22). And this means there is not uniformity, instead there is variety, but variety united. Hence the duty to respect the cultural origin of every person, placing them in a space of freedom that is not restricted by any imposition dictated by a single predominant culture.

To accept that we have been liberated by Christ—his passion, his death, his resurrection—is to accept and bring fullness also to the different traditions of each people.

This is the meaning of calling ourselves Catholics, of speaking of the Catholic Church. It is not a sociological denomination to distinguish us from other Christians; Catholic is an adjective that means universal: catholicity, universality. The universal, that is Catholic, Church, means that the Church contains in herself, in her very nature, an openness to all peoples and cultures of all times, because Christ was born, died and rose again for everyone.

Besides, culture is by its very nature in continual transformation. If one thinks of how we are called to proclaim the Gospel in this historical moment of great cultural change, where an ever more advanced technology seems to have the upper hand. If we were to speak of faith as we did in previous centuries, we would run the risk of no longer being understood by the new generations. The freedom of Christian faith—Christian freedom—does not indicate a static vision of life and culture, but rather a dynamic vision, and vision that is dynamic even in tradition. Tradition grows, but always with the same nature. Let us not claim, therefore, to possess freedom. We have received a gift to take care of.

Rather, it is freedom that asks each one of us to be constantly on the move, oriented towards its fullness. It is the condition of pilgrims; it is the state of wayfarers, in continual exodus: liberated from slavery so as to walk towards the fullness of freedom. And this is the great gift that Jesus Christ gave us. The Lord has liberated us from slavery freely, and has set us on the path to walk in full freedom.