Pope Francis is making space for LGBT people in the church—with limits. And it’s a huge step forward. 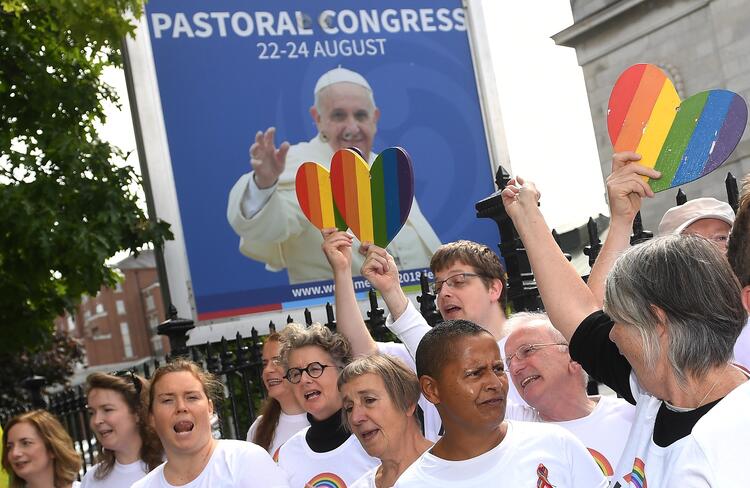 An LGBT choir sings outside the Pastoral Congress at the World Meeting of Families in Dublin Aug. 23. (CNS photo/Clodagh Kilcoyne, Reuters)

In the past few months, the Holy Father has spoken several times about the church’s pastoral approach to L.G.B.T. people in a variety of venues. Depending upon one’s sympathies, Pope Francis’ statements might feel like a breath of fresh air; for others, they might represent a scandal; and for still others his positions may seem confusing or perhaps even contradictory.

As I see it, the pope is carving out a much-needed space for L.G.B.T. people in the Catholic Church, with some clear boundaries. But even with those boundaries, it is a space much larger than any of his predecessors would have countenanced.

As with much of his pastoral approach overall, his outreach to L.G.B.T. people can be characterized by the word “accompaniment.”

A few recent comments by Pope Francis highlight this new reality. Most recently, he spoke with Jesuits in Slovakia during his pastoral trip there and affirmed the need for “pastoral care for homosexual couples,” while at the same time voicing his opposition to “gender ideology.”

During an in-flight press conference on the way back from Slovakia, he said, “If a homosexual couple wants to lead a life together, the state has the possibility to give them safety, stability, inheritance.” In the same response, he also affirmed the Catholic Church’s traditional stance on marriage: In the church, it is a sacrament reserved for a man and a woman.

And just a few months ago, in a letter to me on the occasion of the Outreach LGBTQ Catholic Ministry Conference, he encouraged those who minister to the L.G.B.T. “flock” (he used the Spanish word feligresia) to approach them in the “style of God,” which he described as incorporating “closeness, compassion and tenderness.”

Francis has said that L.G.B.T. people should never be kicked out of families and that Jesus would never say “Go away from me” to a gay person.

In essence, Pope Francis is encouraging the church to accompany L.G.B.T. people pastorally, which means treating them with the “respect, compassion and sensitivity” that the Catechism of the Catholic Church asks; listening to their varied experiences; helping them feel more welcome in their own church; and supporting the individuals and groups that minister to them in parishes, schools and elsewhere. And he has shown that he is often willing to take their side against homophobia. During earlier in-flight press conferences, Francis said that L.G.B.T. people should never be kicked out of families and that Jesus would never say “Go away from me” to a gay person. As with much of his pastoral approach overall, his outreach to L.G.B.T. people can be characterized by the word “accompaniment.”

Francis’ approach is tempered by his suspicion of what is referred to as “gender ideology” or “gender theory,” which detractors say imposes ideological constructs on people, and encourages them to choose or change their genders; as well as his emphasizing traditional teachings on the sacrament of matrimony. Francis, who opposes ideologies in general as “abstract” and thus divorced from people’s lived experiences, called “gender ideology” in his talk to the Slovakian Jesuits “dangerous.” The Vatican’s Congregation for Education has contended that it “culminates in the assertion of the complete emancipation of the individual from any a priori given sexual definition, and the disappearance of classifications seen as overly rigid.”

The space he has carved out, then, includes the pastoral care of L.G.B.T. people in the church and the acceptance of same-sex couples in the social sphere, bordered by the rules on sacramental marriage and his position on “gender ideology.”

Francis, who opposes ideologies in general as “abstract,” called “gender ideology” in his talk to the Slovakian Jesuits “dangerous.”

Let me speak about two noteworthy aspects of this new “space.”

First, the pope’s consistently encouraging words for same-sex couples in civil unions and his desire not only to support legal protections but to accompany them pastorally is nothing short of revolutionary. Contrast that approach with Pope Emeritus Benedict XVI’s recent description of same-sex marriage as a “distortion of conscience” and Benedict’s comment in 2012 that it “threatens the future of humanity itself.”

Pope Francis’ support of legal protections for same-sex marriages also poses a challenge for the church in countries whose laws and customs violently oppose any sort of acceptance of L.G.B.T. people. A recent book by Mark Gevisser called The Pink Line provides a comprehensive and often shocking look at the barriers to L.G.B.T. people living peacefully as individuals, let alone as couples, in many parts of the world. Gevisser’s book details the beatings, harassment and violence faced by L.G.B.T. people—especially couples—that force some to flee their countries as refugees. So the pope’s words, which may seem tepid in the West, may be received as white-hot in other locales.

L.G.B.T. people, especially transgender people, will tell you that they are not responding to any philosophical or political “ideology.”

Francis’ encouragement to reach out pastorally not simply to L.G.B.T. individuals but, as he said to the Slovakian Jesuits, “homosexual couples,” also stands in contrast to the practice of many institutions in the United States, often with the encouragement of local bishops, to fire employees who are in same-sex marriages. Firing people, depriving them of their livelihood and removing them from often long-standing positions within their communities, is the opposite of “pastoral care.”

The question of “gender ideology” is more complicated. It is a notoriously amorphous term that seems to have as many definitions as it has opponents. But, overall, it has come to mean any philosophical or, more broadly, intellectual approach that questions traditional sex or gender roles. So it is seen as, again, an “ideology.”

The reality of people’s lived experiences, as reported by L.G.B.T. people, seems more complex. The vast majority of  L.G.B.T. people, especially transgender people, say  that they are not responding to any philosophical or political  “ideology,” as much as living out who they believe themselves to be, often in the face of the severest persecution. As Luisa Derouen, a Dominican sister who has worked with transgender people since 1999, said in an email, “Transgender people experience a neurobiological condition that is complex. It is their unchosen lived experience.

Or as the Rev. Ray Dever, a Catholic deacon and the father of a transgender child, put it in an article in U.S. Catholic, “When I hear pronouncements about an ‘ideology of gender,’ they simply do not ring true for me. Anyone with any significant first-hand experience with transgender individuals would be baffled by the suggestion that trans people are somehow the result of an ideology. It is a historical fact that long before there were gender studies programs in any university or the phrase gender ideology was ever spoken, transgender people were present, recognized, and even valued in some cultures around the world. ”

Pope Francis’ pastoral approach, then, can be seen as one that seeks to offer care, welcome and accompaniment, within certain limits. But the space that he has carved out is far larger than the limited space allowed by his predecessors. Francis’ approach, as I see it, far better expresses and resembles the “closeness, compassion and tenderness” of God to a community of people who are our brothers, sisters and siblings.

The church still has far to go, but Francis is inviting us to walk in the right direction.