Pope Francis responds to attacks from EWTN, other church critics: ‘They are the work of the devil.’ 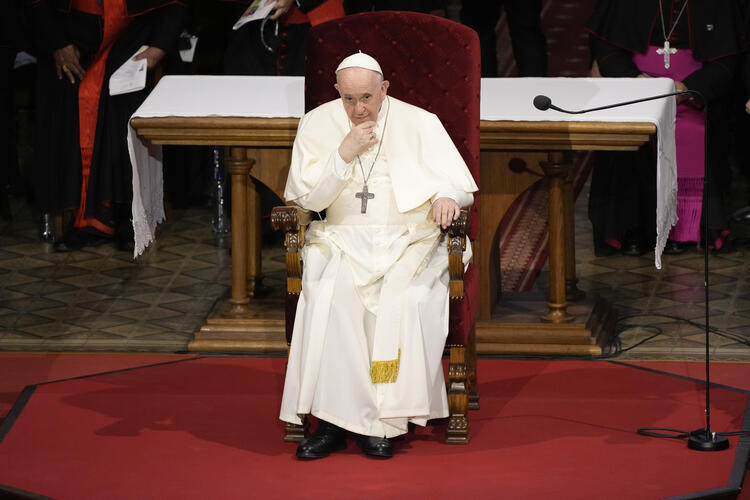 In this Sept. 13, 2021 file photo Pope Francis attends a meeting with priests, religious men and women, seminarians and catechists, at the Cathedral of Saint Martin, in Bratislava, Slovakia. (AP Photo/Gregorio Borgia, file)

When a Jesuit in Slovakia asked Pope Francis “How are you?”, the pope stunned them with his answer: “Still alive, even though some people wanted me to die.”

“There were even meetings between prelates who thought the pope’s condition was more serious than the official version. They were preparing for the conclave,” Pope Francis said.

That statement was not the only striking piece of information given by the pope during his conversation with 53 Jesuits from Slovakia. The group met at the nunciature in Bratislava on Sept. 12 during the pope’s visit to the country. Antonio Spadaro, S.J., the editor in chief of the Jesuit magazine La Civiltà Cattolica,was present at the meeting and published the full transcript of the conversation today.

When a Jesuit in Slovakia asked Pope Francis “How are you?,” the pope stunned them with his answer: “Still alive, even though some people wanted me to die.”

During the Q&A session, another Jesuit told Francis that in the Slovak church “some even see you as heterodox, while others idealize you. We Jesuits try to overcome this division.” He asked the pope, “How do you deal with people who look at you with suspicion?”

Pope Francis remarked, “There is, for example, a large Catholic television channel that has no hesitation in continually speaking ill of the pope.” He said: “I personally deserve attacks and insults because I am a sinner, but the church does not deserve them. They are the work of the devil. I have also said this to some of them.”

While Francis did not name the “large Catholic television channel” in his answer, his remark “I have also said this to some of them” offers a clue as to which station he was referring to. America has learned from three different Vatican officials, who asked for anonymity because they were not authorized to speak, that the pope touched on this same topic on his flight from Rome to Baghdad on March 5, when he greeted each of the journalists on the flight.

“I personally deserve attacks and insults because I am a sinner, but the church does not deserve them. They are the work of the devil. I have also said this to some of them.”

On that occasion, when the pope reached EWTN’s reporter and cameraman, one of them told him they were praying for him. He responded that maybe Mother Angelica, EWTN’s founder, is in heaven praying for him, but that they—referring to the entire network—“should stop speaking badly about me.” He used the Italian word sparlare, which means “to bad-mouth,” “to say nasty things” or “to speak ill of.” America’s Vatican correspondent was on the papal flight and learned this immediately after the visit to Iraq.

EWTN and its associated publications, the National Catholic Register and Catholic News Agency, along with its more than 500 radio affiliates, have been highly critical of Pope Francis. The National Catholic Register was one of two outlets that published the former nuncio to the United States and QAnon conspiracy theorist Archbishop Carlo Maria Viganò’s explosive 2018 “testimony” calling on the pope to resign. Raymond Arroyo, the host of EWTN’s “The World Over,” has interviewed many of Pope Francis’ most fervent critics, including Archbishop Viganò, Trump adviser Steve Bannon and Cardinal Raymond Burke.

But, Pope Francis told the Slovak Jesuits, it is not only a Catholic television channel that speaks badly about him. “There are also clerics who make nasty comments about me,” he said. “I sometimes lose patience, especially when they make judgments without entering into a real dialogue. I can’t do anything there. However, I go on without entering their world of ideas and fantasies. I don’t want to enter it, and that’s why I prefer to preach.”

Francis added, “Some people accuse me of not talking about holiness. They say I always talk about social issues and that I’m a Communist. Yet I wrote an entire apostolic exhortation on holiness, ‘Gaudete et Exsultate.’”

“There are also clerics who make nasty comments about me. I sometimes lose patience, especially when they make judgments without entering into a real dialogue.”

Commenting on his decision to issue “Traditionis Custodes,” restricting the celebration of the Tridentine Latin Mass and liturgy, Pope Francis said, “I hope that with the decision to stop [allowing priests to automatically opt in to celebrating] the ancient rite, we can return to the true intentions of Benedict XVI and John Paul II,” who hoped to maintain church unity and heal schisms by approving celebrations of the pre-Vatican II Mass.

Pope Francis reiterated that his decision was “the result of a consultation with all the bishops of the world made last year,” which, he said in a note accompanying the decision, showed him that the opportunity to celebrate the Tridentine Mass, intended to foster unity, was instead “exploited” to increase divisions in the church.

Speaking to the Slovak Jesuits, the pope said, “From now on those who want to celebrate with the vetus ordo [the old form of the Mass]must ask permission from Rome, as is done with biritualism,” that is, permission to celebrate in two different rites, like the Byzantine and Roman rites.

“There are young people who after a month of ordination go to the bishop to ask for [permission to celebrate the Tridentine Mass],” the pope continued. “This is a phenomenon that indicates that we are going backward.”

“Some people accuse me of not talking about holiness. They say I always talk about social issues and that I’m a Communist. Yet I wrote an entire apostolic exhortation on holiness.”

He told the story of a cardinal who was visited by two newly ordained priests asking for permission to study Latin. “With a sense of humor, he replied, ‘But there are many Hispanics in the diocese! Study Spanish to be able to preach. Then, when you have studied Spanish, come back to me, and I’ll tell you how many Vietnamese there are in the diocese, and I’ll ask you to study Vietnamese. Then, when you have learned Vietnamese, I will give you permission to study Latin.’”

Francis said that the cardinal made the young priests “‘land’; he made them return to earth.”

“I go ahead, not because I want to start a revolution,” he said. “I do what I feel I must do. It takes a lot of patience, prayer and a lot of charity.”

Another Jesuit who had lived in both Slovakia and Switzerland told the pope that he had experienced “pastoral creativity” while the church was repressed under Communist rule in Slovakia, but that more recently he had seen “that many people want to go back or seek certainties in the past…. What vision of church can we follow?”

Pope Francis responded: “Life scares us…. Freedom scares us. In a world that is so conditioned by addictions and virtual experiences, it frightens us to be free.” He cited a passage from “The Grand Inquisitor” scene from Fyodor Dostoyevsky’s The Brothers Karamazov, in which the inquisitor approaches Christ and “reproaches Jesus for having given us freedom: a bit of bread would have been enough and nothing more.”

“That is why today we look back to the past: to seek security,” the pope said. “It frightens us to celebrate [Mass] before the people of God who look us in the face and tell us the truth. It frightens us to go forward in pastoral experiences. I think of the work that was done—Father Spadaro was present—at the Synod on the Family to make it understood that couples in second unions are not already condemned to hell. It frightens us to accompany people with sexual diversity.”

The first Jesuit pope concluded his answer, “Today I believe that the Lord is asking the Society to be free in the areas of prayer and discernment. It is a fascinating time, a beautiful moment, even if it is that of the cross.”

Another Jesuit asked the pope about his frequent references to “ideological colonization,” a term the pope has often tied to the idea that gender is separate from biological sex.

Pope Francis: Rigidity in the church ‘is a sin against the patience of God’
Gerard O’Connell

“Ideology always has a diabolical appeal, as you say, because it is not embodied,” the pope said. “The ‘gender’ ideology of which you speak is dangerous, yes. As I understand it, it is so because it is abstract with respect to the concrete life of a person, as if a person could decide abstractly at will if and when to be a man or a woman. Abstraction is always a problem for me.”

The pope emphasized: “This has nothing to do with the homosexual issue, though. If there is a homosexual couple, we can do pastoral work with them, move forward in our encounter with Christ.”

Francis concluded, “When I talk about ideology, I’m talking about the idea, the abstraction in which everything is possible, not about the concrete life of people and their real situation.”