Pope Francis: Rigidity in the church ‘is a sin against the patience of God’ 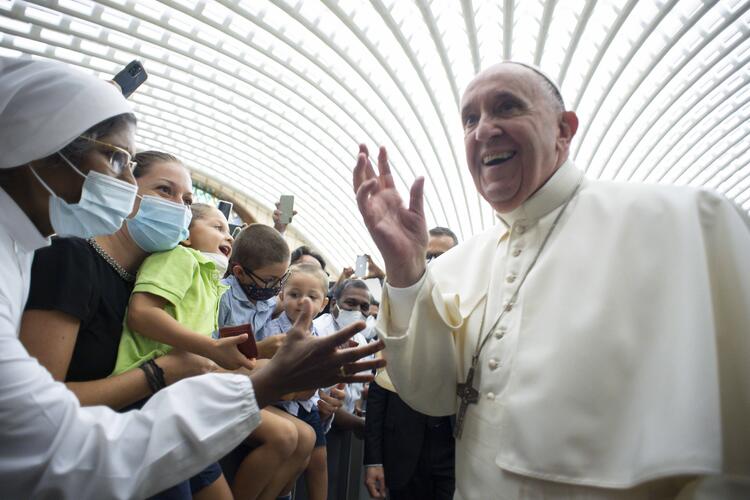 Pope Francis greets people during an audience with the faithful from the Diocese of Rome at the Vatican Sept. 18, 2021. (CNS photo/Vatican Media)

On Sept. 18, Pope Francis addressed roughly 1,000 representatives from the Diocese of Rome to speak about the upcoming church-wide synod. “I have come here to encourage you to take this synodal process seriously and to tell you that the Holy Spirit needs you,” the pope said to those gathered in the Paul VI audience hall, which included bishops, clergy, women and men religious and members of the laity. “Listen to him. Listen to each other; do not leave anyone out.”

Pope Francis explained that the synodal process will be a journey spanning two years that involves “a dynamism of mutual listening, conducted at all levels of the church, involving the whole people of God.” It aims to involve the bishops, priests, women and men religious and the lay faithful in each of the more than 3,000 dioceses of the Catholic Church worldwide.

He will officially open the synodal process at the Vatican on Oct. 9 and hopes to preside over its conclusion at the Synod of Bishops in Rome in October 2023. Its aim is to involve the whole church through a process of “listening and discernment” at the diocesan, continental and universal levels on the important theme of synodality: “For a synodal Church: communion, participation and mission.”

The synodal process will be a journey that involves “a dynamism of mutual listening, conducted at all levels of the church, involving the whole people of God.”

In his talk, Francis emphasized that the diocesan phase of the synodal process is “very important” because it involves listening to the totality of the baptized in each diocese. “That is why I am here, as your bishop, because it is very important that the Diocese of Rome commits itself with conviction to this journey,” he said. “It would look bad for the diocese and for its bishop if this did not happen,” he remarked with humor.

“Synodality expresses the nature of the church, its form, its style, its mission,” Francis stated. “The Greek word synod means ‘walking together.’ When we speak of synodal church,” he added, we do so by “following what we can consider the first and most important manual of ecclesiology, that is the Acts of the Apostles.”

He said this biblical text recounts the history of how the Word of God and the people who believed in him “walked together and were all protagonists, never an extra.” Moreover, this account of the early church “teaches us that remaining static cannot be a good condition for the church and that movement is a consequence of docility to the Holy Spirit, who is the director of this history in which all are restless protagonists, never static.”

He cited the examples of Peter and Paul as “disciples of the Holy Spirit, who enabled them to discover the geography of divine salvation, opening doors and windows, knocking down walls, breaking chains, freeing frontiers.”

“It may be necessary for us, too, to change direction and overcome convictions that hold us back and prevent us from moving and walking together.”

Likewise, he said, “it may be necessary for us, too, to change direction and overcome convictions that hold us back and prevent us from moving and walking together.”

He recalled that Chapter 10 of Acts recounts that the Holy Spirit moved Peter to go to the house of Cornelius, the pagan centurion, where he learned that “God has no favorites” and “one cannot discriminate in the name of God.”

“We cannot understand ‘catholicity’ without referring to this large field hospital, which has no borders,” Francis said. “To be church is to enter into this breadth of God.”

Francis recalled that in this first synodal journey there was “a clash of visions and different expectations.”

The pope said that we should not be afraid if, and when, the same conflicts occur during the upcoming synod. He described these clashes as “signs of docility and openness to the Spirit” that can even reach “dramatic points,” as happened over the question of circumcision that led to the holding of the council of Jerusalem.

Francis recalled that the clash of different visions for the church’s future were resolved at the Council of Jerusalem, and he paraphrased the council’s final statement (Acts 15:28): “It appears good to the Holy Spirit and to us to not impose any other obligation, except what is necessary.” He noted that in the church “there is always the temptation to go it alone, expressing a ‘substitute ecclesiology’ as if, when he ascended to heaven, the Lord had left a void to be filled.”

He said the Council of Jerusalem shows that this is not the case. The council was “a denial of those who pretend to take the place of God, who pretend to model the church on their own cultural, historical convictions,” he said. And it reveals a church that “in words and deeds gives witness to the unconditional love of God”and “expresses its own catholicity.”

Francis noted that just as in the early church, in the church today “there can be a rigid way of considering things, that can mortify the patience of God.

Pope Francis then addressed the dominant rigid model of church, in which bishops and priests tend to see themselves as the teachers and everyone else is expected to follow. He implied that the synodal process aims to reshape this way of understanding the church, “because it brings about listening to all of the baptized, who are the subject of the sensus fidei [sense of faith] that is infallible in believing.” But, he added, “there is no sensus fidei without participation in the life of the church.”

Significantly, Francis said: “There is much resistance to overcome the image of a church rigidly divided between leaders and subordinates, between those who teach and those who have to learn, forgetting that God likes to overturn positions. Walking together discovers horizontality rather than verticality as its line.”

“The pastors walk with the people, sometimes ahead of them, sometimes in the middle, sometimes behind,” he said. “Ahead to guide, in the midst to encourage and not forget the smell of the sheep, behind because the people have a ‘nose,’ the nose to find new ways for the journey or to find again the lost path.” But in terms of having “a nose,” Francis said, “we should remember that we are all sheep with respect to the Shepherd, who is the Lord.”

Pope Francis said “there will always be discussions” in the church, “but the solutions are to be found in the Word of God and in his voices in the midst of us; praying and opening our eyes to all that surrounds us; practicing a life faithful to the Gospel; interrogating revelation according to ‘a pilgrim hermeneutic’ that ‘knows how to safeguard’ the journey begun in the Acts of the Apostles. Otherwise, we humiliate the Holy Spirit.” He recalled how Gustav Mahler, the great 19th-century composer, held that fidelity to tradition “does not consist in worship of ashes but in preservation of fire.”

“There is much resistance to overcome the image of a church rigidly divided between leaders and subordinates, between those who teach and those who have to learn.”

In his talk—given to the Diocese of Rome but also implicitly addressed to dioceses worldwide—Francis told the faithful that they should feel themselves as “part of the one great people of God destined for the divine promises.” We should not view this as an exclusive prize that we have won, but rather “as a gift...which we have received for all, as a responsibility.” This is the responsibility “to witness in deeds and not only in words to the wonders of God which, if they are known, could help people to discover his existence and accept his salvation.”

He said God’s will that all people may be saved through the incarnation of his Son is offered “through the mediation of the church, so that all may become his sons and daughters.... In this way, the universal reconciliation between God and humanity is brought about.”

The church should feel that it is chosen for this task, Francis said. He added that he wrote his encyclical “Fratelli Tutti” because “the aim of the church today is to be a school of fraternity.”

“I have come here to encourage you to take this synodal process seriously, and to tell you that the Holy Spirit needs you.”

He reminded his audience that “the Holy Spirit in his freedom does not know boundaries, and he does not let himself be limited by belonging.”

“If the parish is the house of all in the neighborhood, not an exclusive club, I recommend that you leave the doors and windows open, do not limit yourselves to those who frequent [the parish] or think like you,” the pope said. “Let everyone enter.... Allow yourselves to go out to meet people and to be questioned by people. Let their questions be your questions; allow yourselves to walk together. The Spirit will lead you. Do not be afraid to enter into dialogue; it is the dialogue of salvation.”

Pope Francis concluded his 45-minute talk by telling his audience: “I have come here to encourage you to take this synodal process seriously, and to tell you that the Holy Spirit needs you. Listen to him by listening to yourselves, and do not leave anyone out or behind.”

This, he said, holds not only for those present but for the whole of the church, “which is not strengthened only by reforming structures, giving instructions, offering retreats and conferences or by dint of directives and programs, but by rediscovering that it is a people that desires to walk together, among itself and with humanity.”