What it means to be ‘woke’ and Catholic 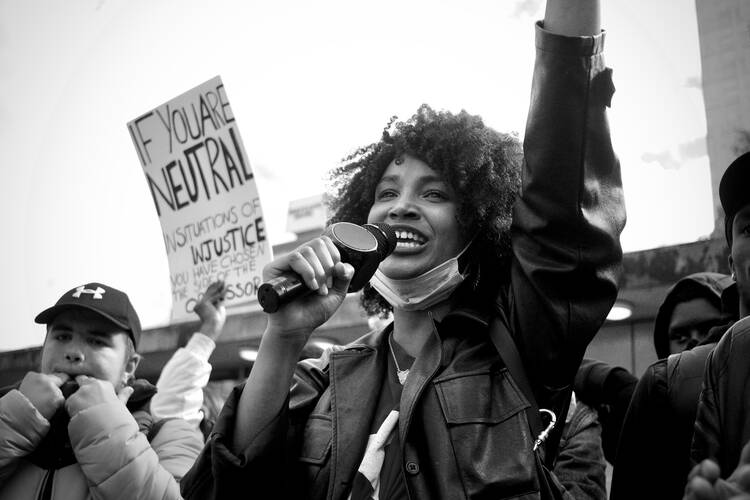 Photo by Sushil Nash on Unsplash

When I was a child, my family took a trip that required driving at night through Georgia. I remember waking up and hearing my parents discussing quietly why they would not take the detour off the interstate. They were alert to the ever-present threat of racist violence. Areas isolated from the main road were ­risky for Black families. So we stayed on the main roads. They were aware of the danger, and I am thankful for that.

Later as a young adult, I visited family in Texas. My aunt told me not to stop for the police if I were within a mile of the house. She advised me to drive as fast as I could home and to “stand on that car horn and wake up all the white folks in the neighborhood” because the police would be less likely to shoot me in front of the white people in their nice neighborhood. She wanted me to understand that I could be a victim of police brutality even in a “nice neighborhood.”

Today, I remain aware that I am not safe everywhere in the United States of America.

I understand the term “woke” to mean being alert, awakening to injustice, including racial injustice.

As a Catholic, I understand the evil present in unjust systems. “Structures of sin” (as we call them) like systemic racism must be destroyed for the sake of human dignity and the common good. Part of being Catholic is awakening to these realities. We must constantly be on guard and resist sin, evil, the devil and all his empty promises.

Although the term “woke” was used positively within the racial justice movement, it has been co-opted and misunderstood in recent years. From my perspective as a Black Catholic woman who has known personally the reality of systemic injustice, I understand the term “woke” to mean being alert and awakening to injustice, including racial injustice. It resonates with my understanding of the Christian call to conversion.

The first step is waking up. The second step is responding. If I believe in the dignity of the human person and the unity of the human family, it follows that I must be actively doing good, which includes thwarting social evils. As a Catholic, this action also involves the interior life: confessing my sins, attending the Holy Mass, praying and following the church’s social and moral teachings. This is the basis for being woke.

I bristle when I hear the term “woke” being used as a slur or a term of derision. Why? It mocks the real suffering and struggles for justice.

I bristle when I hear the term “woke” being used as a slur or term of derision. Why? It mocks the real suffering and struggles for justice. To me, it says: “I don’t know you. I don’t care to know you. I damn sure don’t care if you are suffering. Your efforts for justice are a joke to me.” It is a convenient excuse for remaining detached from or opposed to combatting the evil of racial injustice. I tell myself these people must not really mean this. They must just be unaware, through no fault of their own. I repeat this to myself and pray they will have their eyes and hearts opened. I pray they will wake up.

The term “woke” can be misused as well, such as when it is used to exclude or silence other human beings. In the cause of justice, there are abuses. But people who claim and misuse the term are not “woke” as I understand it. For me, anything that violates or misrepresents the truth of who and what the human person is and what the human person is due, in accordance with Divine Law, stands apart from and is contrary to being woke.

Woke Catholics are people who are open to conversion. They listen. They are humble. They think with the mind and heart of the church.

Woke Catholics are people who are open to conversion. They listen. They are humble. They think with the mind and heart of the church. They are people of prayer who ask for God’s grace and guidance in the lifelong project of conversion.

This week on “The Gloria Purvis Podcast,” I spoke with a woke Catholic who is well known: Helen Prejean, C.S.J., the renowned death penalty abolitionist. As a young sister, she loved retreats and pious devotions. Her life was all about praying and being kind.

Then she woke up. “I had everything to learn,” she tells me. Her story became one of conversion to the suffering and injustice experienced by Black people in her home state of Louisiana and beyond. She called it “a KABOOM moment.” The rest is history.

It’s always easier to remain asleep, to pray for the poor from the comfort of privilege. But to live among them and learn from them, as Sister Helen did, is an act of humility. She chose the harder part. So must we.