We must share our memories of 9/11, no matter how difficult they are to communicate 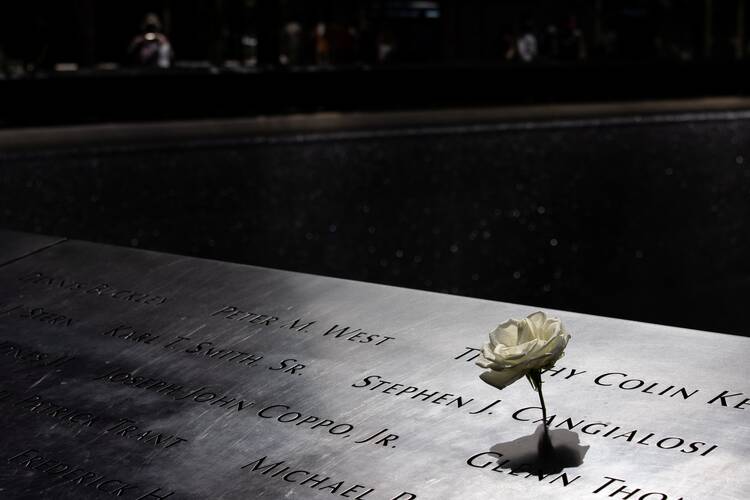 I found out from two women. At first, I dismissed what they said.

On Sept. 11, 2001, I was at my desk at the old America House on 56th Street in Manhattan, which doubled as the offices of Americamagazine and the home of the Jesuit community. Around 9 a.m., my mother called. “Turn on the TV!” she said. “A plane just hit the World Trade Center. It’s terrible!”

I was alarmed and worried about any possible loss of life, remembering photos of a plane that crashed into the Empire State Building in 1945, but I downplayed her report.

“Thanks,” I said. “But you know I don’t work anywhere near there.” A few minutes later, out of curiosity, I turned on the television and saw the terrible images.

As those who were in New York City that day will recall, we did not know how “serious” things were—at first. Many people thought the initial crash was an accident. So I turned off the TV.

A few minutes later I left the house and walked to a doctor’s appointment. People were rushing through the streets and peering down Sixth Avenue, where you could see one of the towers smoking like a cigarette.

At the doctor’s office, the nurses were glued to a TV screen. By the time I walked home, sirens were blaring and people were nervously scanning the skies. When I walked into America House, our receptionist, Glenda, said, “One of the towers collapsed!” The radio announcers were shouting.

Initially I was angry. “Glenda, why are you listening to stuff like that?”

She was right, of course. So were the radio announcers. So was my mom.

In the weeks that followed, my life was consumed with the World Trade Center. That first night I walked to a hastily arranged triage center that expected hundreds of survivors but received none. The next day I worked at a center set up to help people locate loved ones who were presumed to be alive but perhaps dazed, wandering around or being treated in local hospitals. As became evident as the day went on, almost no one fit those categories. Then, on Sept. 13, a police officer in his cruiser saw me in my collar and drove me to “the site,” Ground Zero, which was still on fire. There I began ministering to rescue workers, eventually with several other Jesuits.

Twenty years later, that day still feels unbearably fresh. The freshness is aided by the continuing of the everyday details of my life: I still work at America; I still chat with my mom and Glenda is still our receptionist. My immediate surrounding world feels strangely unchanged. Which makes it hard to believe that enough time has passed that some people who were not yet born that day are now adults.

When I think of the communication of memory, I think of the passion, death and resurrection of Jesus, and how the witnesses in first-century Judea must have burned with the desire to share what those days were like, even if it was nearly impossible to communicate.

How do we communicate what it was like to live that day to people who were not yet born?

I feel something of the same about the events of Sept. 11, 2001. How do we communicate what it was like to live that day to people who were not yet born? The acrid, plastic, foul-smelling cloud that drifted on the wind within hours of the attacks and lingered over the city for days? The still-burning buildings, terrifying in their scale, before they were torn down? The soft grey ash and thick carpet of paper that covered everything within a mile of Ground Zero? Even that nomenclature of Ground Zero, now so accepted, felt cheap to me, like we were aping some action movie. And the widely held belief, like what we now hear during the Covid-19 pandemic, that “everything will change”—that is, the great national unity that emerged would endure. And the disappointment that followed the realization that the biggest change would be more war.

In those weeks, I worked at a place of death, a Calvary. But for me, ministering at Ground Zero was about resurrection. Because what I saw was signs of new life: the heroism of the rescue workers searching for survivors, the generosity of volunteers who came from across the country and, especially, the silent witness of the firefighters and police officers who had given their lives in service for others as they raced into the burning buildings. “Greater love has no person….”

My mind moves to the paschal mystery, however, for another reason: the almost insuperable difficulty that Jesus’ disciples had communicating what they had experienced between Good Friday and Easter Sunday. How much Jesus suffered. All those blows from the Roman soldiers. And they marched him through the street right in front of us. And how he bled and sweated and cried out on that cross. How he never lashed out at them. And we were so frightened that we hid in that dark room afterward.

Most of all, Easter. How Jesus appeared first to Mary! What he said to her! What she told us, breathless after racing from the tomb! And how different he looked when we finally saw him—and yet how the same! So many impossible things to communicate to people who were not there.

One priest’s memory of 9/11
Terrance Klein

Initially, just as I did not believe my mother and Glenda, the male disciples did not believe the women who reported what they had seen. In the Greek, we are told that the men thought it was leros, nonsense (Lk 24:11). The women told them anyway.

Words are ultimately inadequate to fully communicate profound experiences. After Jesus left the earth, the disciples communicated the story orally in an oral culture. Thirty years later, when it became clear that Jesus was not coming back soon and many of the eyewitnesses were dying, Mark wrote his Gospel, generally thought to be the first, around 65 A.D. The Evangelists did their best to write down, or, more accurately, edit, “an orderly account,” as Luke said. “So that you might come to believe,” said John.

After Jesus left the earth, the disciples communicated the story orally in an oral culture.

Yet despite the hard work of the four Evangelists and the repetition of the same stories in the Gospels (the story of the multiplication of the loaves and fishes is told twice in Matthew and Mark), some things remain incommunicable. For all the many accounts of the resurrection, recounted to convince the reader, the stories differ. In some places Jesus seems distinctly physical, in others somewhat ghostly. In some the disciples recognize him immediately; in others they mistake him—for a gardener, for a stranger.

The incommunicability of the past shouldn’t be surprising. Every day I worked at Ground Zero I thought, “I’m working at a grave.” In John’s Gospel, when Mary Magdalene returns to anoint the body of Jesus on Easter morning, the word used for tomb is mnema, from the word for memory. When we return to the events of Sept. 11, we are called to remember. And to share our memories, no matter how incommunicable they are.