Pope Francis to Myanmar Catholics: Work for peace — even by risking your lives 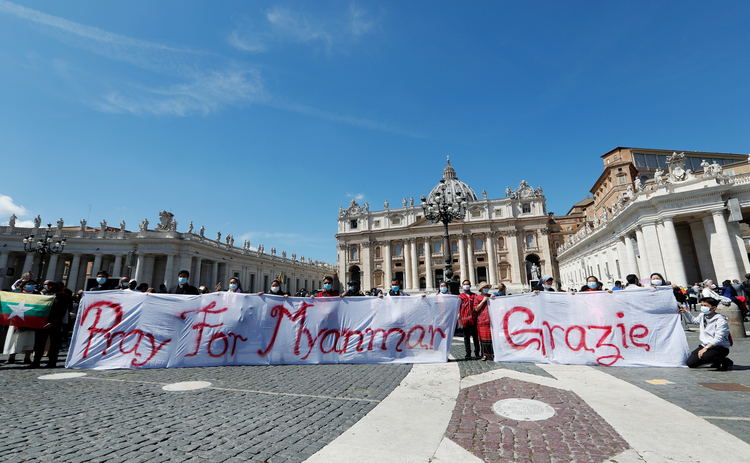 People hold a banner reading "Pray For Myanmar, Grazie" in St. Peter's Square as they wait for Pope Francis to lead the "Regina Coeli" at the Vatican April 25, 2021. (CNS photo/Remo Casilli, Reuters)

Pope Francis brought consolation and hope to Catholics and countless people of other religions in Myanmar when he celebrated Mass in St. Peter’s Basilica this Sunday morning for peace in their troubled homeland, which was robbed of democracy by a military coup on Feb. 1.

More than 170 women religious, priests, seminarians and laypeople from Myanmar who are living in Rome and other parts of Italy joined him for the eucharistic celebration. Young women religious from that country read the Scriptures, prayers of the faithful and the responsorial psalm in Burmese. Francis was deeply moved, and this came through also when he delivered his homily, which he addressed not only to those present but also to the some 750,000 Catholics, as well as other Christians and the followers of different faiths who he knew were following the celebration online from that majority-Buddhist country of 52 million people.

Drawing on the Gospel of the day, Pope Francis recalled how Jesus, in the last hours before his passion, prayed for his disciples who would be distraught soon and asked his Father “to keep them from them from the evil one.”

Pope Francis brought consolation and hope to Catholics and countless people of other religions in Myanmar when he celebrated Mass in St. Peter’s Basilica this Sunday morning for peace in their troubled homeland.

Addressing believers present in the basilica and back home in Myanmar, Francis said, “Dear brothers and sisters, in these days when your beloved country of Myanmar is experiencing violence, conflict and repression, let us ask ourselves: What we are being called to keep?”

He encouraged them “to keep” three things: the faith, unity and the truth.

First, he said, “we need to keep the faith lest we yield to grief or plunge into the despair of those who no longer see a way out.” He recalled how in his darkest hour “Jesus lifts his eyes to God. He does not resign himself to evil; he does not let himself be overwhelmed by grief; he does not retreat into the bitterness of the defeated and disappointed; instead, he looks to heaven.”

Moreover, he said, “Prayer leads us to trust in God even in times of difficulty. It helps us to hope when things seem hopeless, and it sustains us in our everyday struggles. Prayer is not a retreat, an escape, in the face of problems. Instead, it is the only weapon at our disposal for keeping love and hope alive amid the weapons of death.”

“We need to keep the faith lest we yield to grief or plunge into the despair of those who no longer see a way out.”

He admitted that “it is not easy to lift our gaze when we are hurting, but faith helps us resist the temptation to turn in on ourselves. We may want to protest, to cry out to God in our pain. We should not be afraid to do so, for this, too, is prayer.” He recalled that “an elderly woman once said to her grandchildren: ‘being angry with God can also be a form of prayer.’”

He assured them, “at times it is a prayer that God hears more than others, since it comes from a wounded heart and the Lord always hears the cry of his people and dries their tears. Dear brothers and sisters, keep looking up to heaven. Keep the faith!”

Second, Francis urged them “to keep unity” as Jesus asked his disciples. He recalled that “Jesus knew what was in the heart of his disciples; he had seen them argue at times about who was the greatest, who should be in charge.”

“This is a deadly disease: the disease of division,” the pope said. “We experience it in our hearts because we are divided within; we experience it in families and communities, among peoples, even in the church.”

“It is not easy to lift our gaze when we are hurting, but faith helps us resist the temptation to turn in on ourselves. We may want to protest, to cry out to God in our pain. We should not be afraid to do so, for this, too, is prayer.”

“Sins against unity abound: envy, jealousy, the pursuit of personal interests rather than the common good, the tendency to judge others,” Francis said. “Those little conflicts of ours find a reflection in great conflicts, like the one your country is experiencing in these days. Once partisan interests and the thirst for profit and power take over, conflicts and divisions inevitably break out.”

He reminded the faithful in Myanmar that before his passion and death, Jesus’ final appeal was for unity and said, “Division is of the devil, the great divider and the great liar who always creates division.”

He added, “We are called to keep unity, to take seriously this heartfelt plea of Jesus to the Father: to be completely one, to be a family, to find the courage live in friendship, love and fraternity. What great need we have, especially today, for fraternity!”

“We are also called to do this as a church,” he said. “Let us promote dialogue, respect for others, care for our brothers and sisters, communion! We cannot allow a partisan way of thinking to enter into the church, a way of thinking that divides, that puts each individual in first place while casting others aside. This is very destructive: it destroys the family, the church, the society and every one of us.”

Third, Francis said, “we are called to keep the truth.”

“Keeping the truth does not mean defending ideas, becoming guardians of a system of doctrines and dogmas, but remaining bound to Christ and being devoted to his Gospel.”

“Keeping the truth does not mean defending ideas, becoming guardians of a system of doctrines and dogmas but remaining bound to Christ and being devoted to his Gospel,” he said. “Jesus prays that his disciples, although living in the world, will not follow the criteria of this world. They are not to let themselves be enticed by idols but to keep their friendship with him; they are not to bend the Gospel to human and worldly ways of thinking, but to preserve his message in its integrity.”

Indeed, Francis said, “to keep the truth means to be a prophet in every situation in life, in other words to be consecrated to the Gospel and bear witness to it even when that means going against the current. At times, we Christians want to compromise, but the Gospel asks us to be steadfast in the truth and for the truth, offering our lives for others. Amid war, violence and hatred, fidelity to the Gospel and being peacemakers calls for commitment, also through social and political choices, even at the risk of our lives. Only in this way can things change.”

He said, Jesus “has no use for the lukewarm. He wants us to be consecrated in the truth and the beauty of the Gospel, so that we can testify to the joy of God’s kingdom even in the dark night of grief, even when evil seems to have the upper hand.”

Pope Francis concluded his inspiring homily by assuring the faithful of Myanmar:

Dear brothers and sisters, today I wish to lay upon the Lord’s altar the sufferings of his people and to join you in praying that God will convert all hearts to peace. Jesus’ prayer helps us keep the faith, even in times of difficulty, to be builders of unity and to risk our lives for the truth of the Gospel. Please, do not lose hope: even today, Jesus is interceding before the Father, he stands before the Father in his prayer. He shows the Father, in his prayer, the wounds with which he paid for our salvation. In this prayer Jesus intercedes for all of us, praying that the Father will keep us from the evil one and set us free from evil’s power.

At the end of Mass, a young Myanmar priest, the Rev. Bosco Mung Sawng thanked the pope in the name of the Catholics and the people of Myanmar for the celebration today and for having spoken out publicly and asked prayers for their country on six previous occasions.

Next, some sisters brought gifts to the pope, and after he imparted his blessing, a choir of young women religious from Myanmar sang a hymn in their native language that summed up key elements of the pope’s homily, namely to pray and trust in God who does not abandon us in difficult times.

One of the Myanmar sisters, Sister Maria Goretti, told America that during the Mass, she “felt God’s grace was here.” Two Myanmar priests studying in Northern Italy said they felt greatly “consoled and encouraged” by today’s celebration. One of them, the Rev. Khun A. T. Paul, described the Mass as “a very great gift to us, a great consolation for us in such a problematic moment in our country, and I know this is true not only for Catholics but also so many people of other religions in Myanmar.” His friend, Father Stephen, added: “We were truly privileged to be able to be here. Pope Francis has given the people of Myanmar a great gift and encouragement today; he has assured us that we are not alone and that evil will not triumph.”