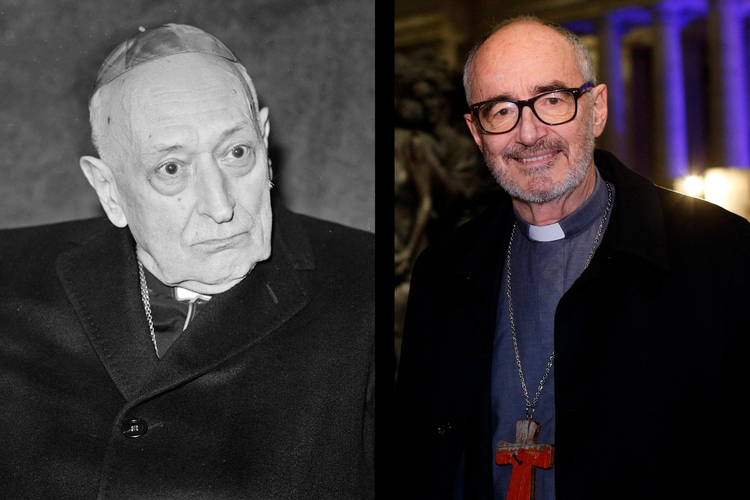 “The lessons of 1949 and 1956 speak to us today,” said Cardinal Michael Czerny, S.J, in his homily on May 6, at a Mass marking the 46th anniversary of the death of the famous Hungarian Cardinal Jósef Mindszenty.

On Feb. 8, 1949, the cardinal-primate of Hungary was condemned to life imprisonment after a show trial held in the Communist-ruled country in which he was convicted of treason, espionage and black-marketeering. Almost eight years later, during the Hungarian uprising, the cardinal was released from prison and returned to Budapest on Oct. 30, 1956. But less than a week after the cardinal’s release, the Soviet Union invaded Hungary. Although the cardinal was granted political asylum at the U.S. embassy in Budapest, he was forced to live there for the next 15 years. In 1971, thanks to a compromise reached between authorities in Hungary and the Vatican, the cardinal moved to Austria. He died in Vienna on May 6, 1975.

Cardinal Czerny, who was born in 1946 in the neighboring country of then-Czechoslovakia, highlighted the striking similarities between then and now in his homily. The anniversary Mass was celebrated in Rome at the church of Santo Stefano in Rotondo, the titular church given to Mindszenty by Pius XII on February 21, 1946 when he was made a cardinal. When Pius XII gave the red hat to Cardinal Mindszenty along with 31 others, he is reported to have told him that “among these 32, you will be the first to suffer the martyrdom symbolized by this red color.”

The cause for Cardinal Mindszenty’s beatification was opened in June 1993, and Pope Francis declared him venerable in February 2019.

Cardinal Czerny, addressing the congregation—which included the Hungarian ambassador to the Holy See who organized the commemoration, Eduard Habsburg-Lothringen, a descendant of the late Austro-Hungarian emperor and Hungarian king, Franz Joseph I, and his wife, Queen Elizabeth—recalled how in 1948, “my parents and younger brother and I fled from Czechoslovakia and arrived in Canada.” During the first decade or more in Canada, the cardinal said, “our main contacts were largely other post-World War II refugees from the devastated countries of Europe.” But, he added, “inevitably, the traumatic past accompanied us into the new world, sometimes defining us by what we fled and what we feared.”

“The 1950s were a time of recovery, the beginning of prosperity in the West,” the cardinal told the congregation, among whom were Hungarian clergy and laity, and diplomats from other countries. “There was even hope of new freedom in the Communist world.... A glorious and promising flame burned for a few weeks during the Hungarian uprising of October 1956.” That uprising “had a strong impact worldwide,” he said, and “even in our house, in faraway Canada, where a Hungarian refugee ‘Buba’ lived with us for six months.”

“For my young self,” Cardinal Czerny said, “Cardinal Mindszenty was brave, honest and true. He was not broken by repression and persecution; rather, he transcended them.

Cardinal Czerny told the congregation that he was 10 years old at that time. “I was much influenced by the desperation and the cruelty of the crisis, inspired by the courage of the revolutionaries and aghast at the desperation and the cruelty with which they were repressed. I knew about Cardinal Mindszenty, his life imprisonment sentence in 1949, his being set free, and then—when the hoped-for support didn’t come from without—taking refuge in the U.S. embassy,” he said. “The cardinal incarnated the whole drama.”

“For my young self,” Cardinal Czerny said, “Cardinal Mindszenty was brave, honest and true. He was not broken by repression and persecution; rather, he transcended them. Instead of focusing on external threats, he tapped into inner human, cultural and spiritual strengths so as to remain free, faithful to his calling and his mission.”

The cardinal then turned to the present day. “Today, we face comparable challenges, with many regimes showing totalitarian tendencies and suppressing liberties. Millions seek refuge from war, repression, poverty and environmental degradation, and voices calling for dignity and freedom are stilled with cold violence,” he said. “Inequalities and violent divisions persist between and within societies.”

Cardinal Czerny’s words could be read as a diplomatic nudge to modern-day Hungary, where more than half of the population is Catholic. Its government has shown itself to have authoritarian political tendencies and closed its borders to asylum seekers and migrants.

“The lessons of 1949 and 1956 speak to us today,” Cardinal Czerny said, drawing attention to the pope’s words in his message for the World Day for Migrants and Refugees:

Myopic, extremist, resentful and aggressive nationalisms and radical individualism are crushing the us willed by God, both in the wider world and within the Church. And the highest price is paid by those who most easily become the other: foreigners, migrants, the marginalized, inhabitants of existential peripheries.

Pope Francis calls us “to walk together toward an ever wider ‘we,’” which, “begins with a heartfelt invitation to reconstitute the human family,

The cardinal recalled how in the early church there was a big debate over whether Gentiles would have to accept Jewish customs before being accepted into the Christian community, but St. Peter told them, “God has made no distinction between them and us.” The cardinal said this gives us the truly universal church that endures to our day and will always endure. Pope Francis is “today’s Successor of St. Peter,” said the cardinal. “He calls on the world to resist the natural temptation to enwall its own ‘us’ and instead to aspire to an ever-wider ‘we.’” In his message, the pope calls us “to walk together toward an ever wider ‘we,’” which, “begins with a heartfelt invitation to reconstitute the human family, to build together our future of justice and peace, ensuring that no one is left out.”

“Let us honor Cardinal Mindszenty, by remembering him with admiration and affection and by seeking his intercession,” said the cardinal, ending his homily. “Ask him for the grace to see problems as he sees them from our heavenly home.” But, he added, “let us not simply ask for his prayers; let us follow his example. Because he is both a patron and companion. He kept Jesus’ commands and thus abides in the love of our Father and experiences complete joy.”