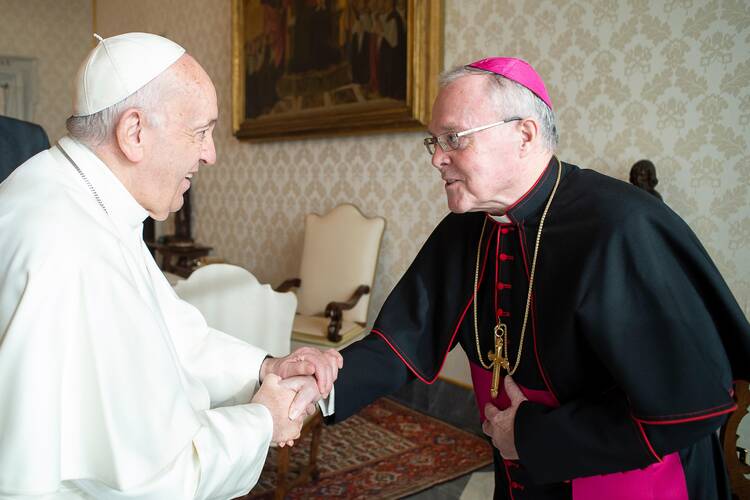 WASHINGTON (CNS) -- Pope Francis has accepted the resignation of Bishop Michael J. Hoeppner, 71, who has headed the Diocese of Crookston, Minnesota, since 2007.

The changes were announced in Washington April 13 by Archbishop Christophe Pierre, apostolic nuncio.

In 2019 Bishop Hoeppner was publicly accused of trying to cover up allegations of sexual abuse against a priest of the diocese. He has denied he thwarted such an investigation.

In September 2019, Archbishop Bernard A. Hebda of St. Paul and Minneapolis confirmed he was overseeing an investigation into the claims and that law enforcement had been notified of the allegations.

The archbishop, who is the metropolitan for the province of Minnesota, North Dakota and South Dakota, said the claims were reported to him as prescribed by "Vos Estis Lux Mundi" ("You are the light of the world").

The "motu proprio" (on his own initiative) was promulgated by Pope Francis in May 2019 to set new worldwide norms for reporting sexual abuse and to hold bishops accountable for abuse and/or its cover-up.

In November 2019. Archbishop Hebda submitted a report to the Vatican Congregation of Bishops and in February 2020, the congregation authorized the archbishop to further investigate the claims.

Bishop Hoeppner was reportedly the first sitting U.S. bishop to be investigated under the new norms.

The Crookston Diocese said in a statement that after this "an extensive investigation," Pope Francis "asked for and has now accepted" Bishop Hoeppner's resignation.

"The investigation which led to the acceptance of Bishop Hoeppner's resignation arose from reports that he had at times failed to observe applicable norms when presented with allegations of sexual abuse involving clergy of the Diocese of Crookston," the diocese said.