St. Óscar Romero helped me carry the cross of experiencing anti-Asian racism—and to speak out against hate. 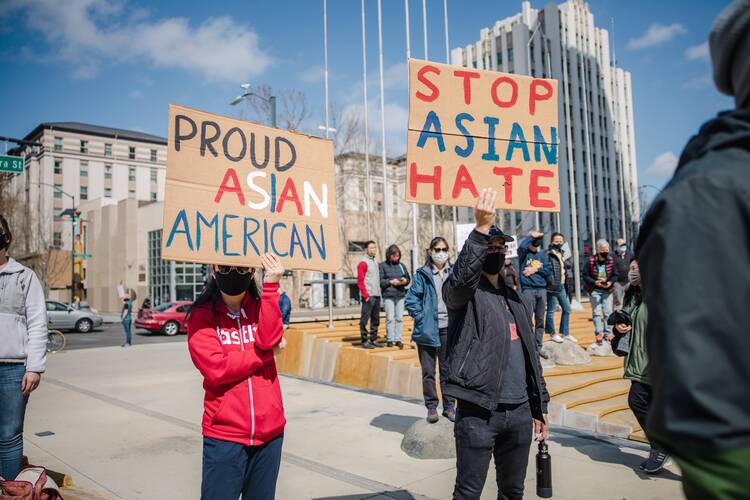 Photo by Jason Leung on Unsplash.

I am sitting in the parking lot of Rockefeller State Park, just outside of New York City. As part of our retreat day, we are to pray with creation, to listen to the voice of God in nature. As Pope Francis says in “Laudato Si’”:“This contemplation of creation allows us to discover in each thing a teaching which God wishes to hand on to us, since “for the believer, to contemplate creation is to hear a message” (Laudato Si’ 85). In the midst of my grief, I am desperate for a message.

As a Filipina American woman and an Asian American, it has been hard to carry the waves of grief, pain and trauma triggered by the recent murders of Asian American women in Atlanta. I have found it easier to allow work to distract me. But today there is space and time. It is a day of retreat as part of my organization’s commitment to live both slow and fast rhythms in our work for ecological and social justice.

St. Óscar Romero’s words asking us to value our sufferings as Christ did invite me to see my struggles as something I do not need to hide.

I was devastated by the news of the shootings in Atlanta, but not surprised. Racial violence against Asian Americans has been on the rise since the beginning of the pandemic, as many have wrongly blamed people who are Chinese, and anyone who looks Asian, for causing the coronavirus. According to Stop AAPI Hate nearly 3,800 hate incidents have been reported against Asian Americans since March 2020, 68 percent from women. Three out of ten Asian Americans have been the targets of racial slurs or jokes since the start of Covid-19, according to the Pew Research Center. Many more incidents will go unreported.

It took days before my body fully took in the terror of the shootings. Perhaps it was a form of protection or denial. Several mornings after the incident, however, I sat down on my meditation cushion for my daily practice. As I settled into the rhythm of my breath, a steady stream of images began to slowly erupt from my unconscious: an unwanted proposition on an escalator in Washington, D.C., after a man learns I am of Filipino descent. A man touching my knee in a bar in Angeles City, Philippines, when he assumes I am one of the women providing entertainment for foreign men. Being at a protest in downtown San Francisco after a U.S. military personnel raped a Filipina outside a U.S. military base. As my friends and I lay in silent demonstration someone yelled “Go back to your country,” not realizing this was the country where we were born.

The images kept coming as tears streamed down my cheeks. I felt like I was touching not just my own pain, but also the pain that Filipina women and other women of Asian descent have experienced for centuries. It is a pain that often remains hidden and goes unnamed. To name my own experience of racism is uncomfortable. I and many others worry these experiences are somehow our fault, instead of the result of histories, narratives and systems that paint us as perpetual foreigners, strangers, aliens. It often feels easier to pretend they did not happen. We want to believe we already belong. For decades many Filipino Americans have been driven to assimilate, to blend in, goals often rooted in internalized colonialism. Many of us (and many second-generation immigrants) are not taught our parents’ tongue because our parents hope that we might better integrate into the United States.

I felt like I was touching not just my own pain, but also the pain that Filipina women and other women of Asian descent have experienced for centuries.

St. Óscar Romero’s words asking us to value our sufferings as Christ did invite me to see my struggles as something I do not need to hide. Indeed Jesus allowed the scars of his body to give witness to the woundedness of the world. This was necessary, in order for them to be transformed. “Racism is a virus that quickly mutates and, instead of disappearing, goes into hiding, and lurks in waiting,” says Pope Francis in his encyclical “Fratelli Tutti” (No. 97).

Getting racism out of its hiding requires awareness. While my own experiences have not led to the same physical violence that tragically ended the lives of the six Korean women in Atlanta, hate directed toward people of Asian descent relegates us as an other, something disposable, a source of pleasure or target for blame. It is rooted in centuries-old racist practices within the United States, from the Yellow Peril and Chinese exclusion act of 1882 to the Japanese internment camps in the 1940s. Even the narrative of the “model minority,” that makes us seem as if we have achieved equality and equity with the majority, is itself a trap used to confuse both us and others into believing that Asian Americans are no longer oppressed by racial systems in the United States. Thus, we attempt to hide our wounds—even from ourselves.

Jesus did not hide his wounds. I no longer need to hide mine. I want to be part of #BreakingAAPIsilence. The next line of St. Óscar Romero’s reflection reads, “Let us change all of that into the cross of salvation that redeems the world and our people.” I reread these words a few times. I do not know how my pain can be redeemed. Perhaps I might hear something in nature. I am ready now to leave my car and find out.

It is a foggy day as I climb up the muddy path to the top of the barren hill overlooking Swan Lake. I begin to see the trees lining the former carriage road. As I look closer I see they have scars, bumps, slashes. They have wounds, and perhaps this is what makes them unique. Some of the burned-out scars have become homes, refuges for birds and animals.

Jesus did not hide his wounds. I no longer need to hide mine.

I reflect more on the scars and notice that while each tree is marked differently from these inflicted wounds, that there is no tree without a blemish. They all have marks. My scars are personal but, unfortunately, not unique. They invite me into solidarity and communion with all people who have ever experienced this sense of otherness.

I think of the immigrants at our southern border who are treated as if they are sub-human: left in cages, refused hospitality or denied medical care while detained. They are seen by many as an other, a nuisance, though they share the same dreams as so many of us: a peaceful place where their children can live and be happy. I think of the blatant violence, resulting from white supremacy, against Black people and communities. I think of the Indigenous communities across the United States whose land we have stolen and who continue to be systematically marginalized.

My scars bind me to them and to all who carry wounds of racism and systemic oppression. They also bind me to the “cross of salvation” that St. Óscar Romero speaks of. This cross of salvation has been carried and transformed by Jesus’ death and resurrection. Jesus is asking me, “Can you trust that I can transform your pain? You must carry your cross, but know you are not alone.”

I reflect on the last part of St. Óscar Romero’s words: “With hatred for none, let us be converted and share from our poverty both our joys and material assistance with those who may be even needier.” I choke reading “With hatred for none.” The anger within my body against the ongoing assault of racism, white supremacy and sexism and the people who perpetuate it is real. It is visceral. I also know that staying in anger is not the way. I am reminded of the analogy that hatred is like a lump of hot coal that you want to throw at another person but with which you burn yourself instead.

My scars are personal but, unfortunately, not unique.

I soften my gaze as I look at the trees. I hear them telling me, “We see you. We honor you. This is not what God intended.” I feel my body relaxing, reminding me of my true self. But some of the pain is still there. “Who do you say that I am?” Jesus asks. I can ask that same question: “Who do you say that I am?” Some might say an object of “temptation,” a scapegoat for the coronavirus, someone who does not belong. The trees remind me otherwise.

As I get closer to the end of the trail, I notice a tall, branchless tree against the gray sky. It is stark, bare. Dead. At its very top I notice a bird, a robin perhaps, taking a rest or finding a meal amidst the tree’s dead crown.

It takes me days to understand why that image gave me hope. It reminds me of the necklace I wear around my neck. A cross with birds resting on it—a symbol of life emerging from death.

As I return to my car, my heart is still heavy. I am reminded of the words that are often attributed to St. Óscar Romero: “It helps, now and then, to step back and take a long view. The kingdom is not only beyond our efforts, it is even beyond our vision.” At this moment I can barely see a glimpse of this vision, of God’s vision. However, I can try to see God’s vision in others, especially those whose dignity has been violated. I imagine them before me. I hear myself saying to them, “I know what it feels like not to be honored, not to be seen. But I see you. You belong. We belong.” I also get a glimpse of a new vision of myself, of my pain. To be held by my ancestors and those who came before me, and to hold those who may need the support today and in the future.

I see you. I honor you. You belong. We belong together. 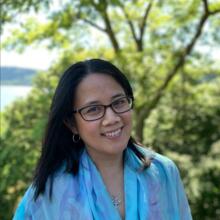 Christina Leaño serves as Associate Director for the Global Catholic Climate Movement and is a retreat leader and spiritual director. She received her MA in Systematic Theology from the Graduate Theological Union in Berkeley, CA. She lives in the New York City area with her husband and daughter.