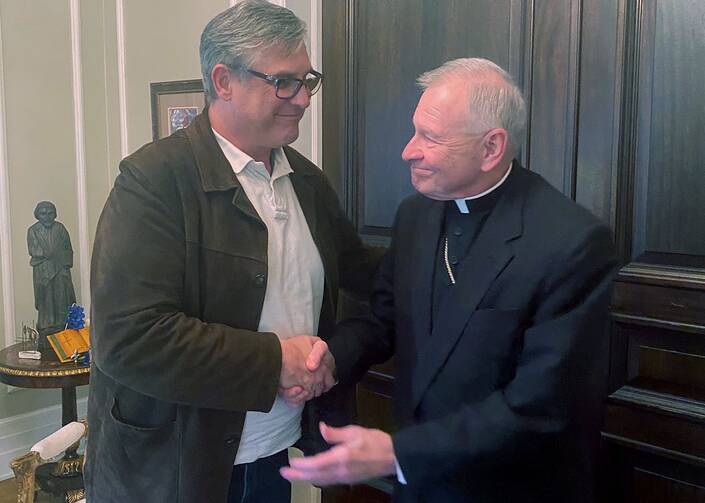 Ongoing discussions between Archbishop Gregory M. Aymond, of the Archdiocese of New Orleans, and Kevin Bourgeois, the leader of the New Orleans chapter of Survivors Network of those Abused by Priests, have led to a significant broadening and restructuring of the archdiocese’s response to abuse survivors.

Archbishop Aymond announced on Feb. 11 that Joey Pistorius, director of the archdiocesan Catholic Counseling Service, will become the new victims assistance coordinator in April. Mr. Bourgeois, who is a licensed clinical social worker, will serve as a volunteer and will offer training to the counseling team when there are disclosures of sexual abuse trauma.

“There’s no need for us to be at odds,” Archbishop Aymond said of the relationship between the archdiocese and SNAP. “We want the same thing, and reconciliation has happened.”

And the archbishop, on the recommendation of Mr. Bourgeois and other victim advocates, plans to appoint a sexual abuse survivor to the Independent Review Board, a body primarily composed of lay professionals, which reviews allegations of abuse to determine their credibility and makes recommendations to the archbishop.

The archbishop first met with Mr. Bourgeois on Dec. 15, initiating “some very open and frank discussions about the strengths and weaknesses of what we’re doing.”

The new victims assistance response team will work together to address the individual needs of each survivor.

Peter Finney Jr. - Catholic News Service
Show Comments ()
Join the conversation: Login or create an account
Before you can comment, you need to update your profile to include your first and last name, as required in our comments policy. Then reload this page and you'll be set up for commenting. Update your profile