‘The Iraqi people are waiting for us’: Why Pope Francis is determined to take this historic trip 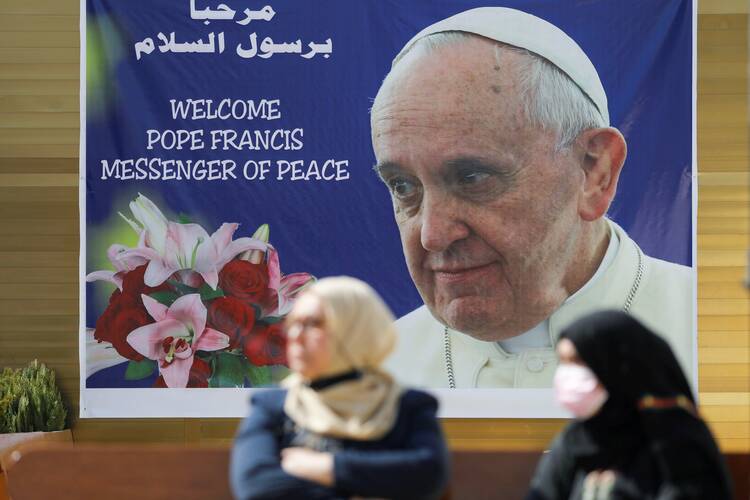 From the beginning of his pontificate, Pope Francis has prioritized the peoples and countries on the peripheries of the world. This weekend, he will visit an oil-rich country that has become a peripheral land in the 21st century as a result of the fallout from four decades of war, violence and terrorism that has brought this majority-Muslim nation of 41 million people to its knees, causing instability, insecurity, enormous international debt, corruption, unemployment and poverty.

Addressing the ambassadors from 183 countries that have diplomatic relations with the Holy See, Pope Francis confirmed on Feb. 8 that he would resume his “apostolic visits” to foreign countries, beginning with Iraq. He explained that these visits “are an important sign of the solicitude of the Successor of Peter for God’s people spread throughout the world.” He said they frequently “provide an opportunity to promote, in a spirit of sharing and dialogue, good relations between the different religions.” He highlighted the importance of this interreligious dialogue and said it “can support the responsible efforts of political leaders to promote the common good.”

Pope Francis wants to express his concern for the people of Iraq and for the Christian communities and other minorities that have suffered violence and persecution.

He views this, his 33rd foreign visit since becoming pope and the 52nd country he has visited, through that lens. He wants to express his concern for the people of Iraq and for the Christian communities and other minorities that have suffered violence and persecution, and to complete his embrace of the Muslim world by reaching out to the Shias, who count for around 65 percent of the Iraqi population, and their revered leader, the Ayatollah al-Sistani. He seeks to promote reconciliation and peace in this country and to give hope to its people, 57 percent of whom are under the age of 25.

Speaking on March 3 at the virtual Wednesday audience from the Vatican, Pope Francis said:

The day after tomorrow, God willing I will go to Iraq for a three-day pilgrimage. For a long time I have wanted to meet those people who have suffered so much; to meet that martyred church in the land of Abraham. Together with the other religious leaders, we shall also take another step forward in brotherhood among believers. I ask you to accompany this apostolic journey with your prayers, so that it may unfold in the best possible way and bear the hoped-for fruits. The Iraqi people are waiting for us; they awaited St. John Paul II, who was not permitted to go. One cannot disappoint a people for the second time. Let us pray that this journey will be a good one.

On the eve of the visit, a senior Vatican official who requested anonymity told America that Pope Francis decided to make this visit notwithstanding the many risks that would counsel against going there at this time. “Francis is trying to do what other people would hesitate to do under such circumstances,” he said. He mentioned “the difficult political situation, a great deal of paralysis in Iraq and in the Middle East, in general, major security concerns related to the pope’s physical security and terrorism, and the spread of the pandemic.”

“The Iraqi people are waiting for us,” Pope Francis said. “They awaited St. John Paul II, who was not permitted to go. One cannot disappoint a people for the second time.”

The security risks came center stage in January with the twin suicide bombings in Baghdad and in February with rockets and attacks against American facilities in Erbil and Baghdad. On Feb. 25, the Biden administration ordered an airstrike on the Syrian side of the border against the alleged attackers. On March 3, a military base that hosts U.S.-led coalition forces came under rocket fire. The base is 112 miles northwest of Baghdad.

The pandemic-related risks were highlighted by the increasing number of new cases—up to 4,000 new cases on some days last week—and the fact that a week before Francis’ arrival the Holy See’s nuncio in Iraq, Archbishop Mitja Leskovar, who was to host him at the nunciature, tested positive for Covid and is now in isolation.

Nonetheless, Francis is going to Iraq, the Vatican official said, because he has been “deeply moved” both by the dramatic situation of the country, caught in the crossfires between powerful international actors including the United States, Iran and Turkey, and by the plight of its minorities, especially Yazidis and Christians, and wants to draw international attention to all this. Moreover, he wants to express his closeness and solidarity—by his physical presence—with the Iraqi people who have suffered so much.

Pope Francis is likely to highlight the plight of Iraq when he addresses some 150 people, including the top state authorities and the diplomatic corps, at the presidential palace, which once served as the residence of Saddam Hussein and later as the U.S. embassy, soon after his arrival in Baghdad on March 5.

Francis is going to Iraq, a Vatican official said, because he has been “deeply moved” both by the dramatic situation of the country.

He will seek to console and encourage the Christian community later that day when he addresses bishops, priests, religious women and men, seminarians and catechists (100 people in all) in the Syro-Catholic cathedral in Baghdad that was bombed in 2010, killing over 50 people, and again when he celebrates Mass for 100 faithful in the city’s Chaldean cathedral on March 6.

During his visit, which will last from March 5 to March 8, Francis will seek to promote peace and reconciliation within Iraq and to embrace its Muslim population, the Vatican official said. At Abu Dhabi in February 2019, he reached out to the Sunni Muslims, who account for 80 percent of all Muslims; now he wants to embrace the other part of the Muslim family, the Shias, by meeting Ayatollah al-Sistani, the most-revered Shia authority in Iraq, who has played a crucial role in the country since the fall of Saddam Hussein. Francis will visit the Ayatollah at Najaf, the third holiest city to Shia Muslims, on March 6.

From Najaf, he will travel to Ur, the birthplace of Abraham, for an important interreligious prayer service with some 100 representatives of the world’s three monotheistic religions—Judaism, Christianity and Islam—that all look to Abraham as the father of belief in the one God. Pope John Paul II had wanted to come here in the year 2000 but did not get clearance to do so. Soon, the man whom he made cardinal hopes to succeed in doing so.

Here, in this region that was the cradle of ancient civilizations and is of immense biblical importance, Francis is expected to emphasize the fundamental biblical message that we are all children of the one God and are called to live together in harmony as brothers and sisters.

The logo for his visit to Iraq contains the words “You are all brothers” (Mt .23:8), which convey the core message that Francis will emphasize throughout Iraq. This message is also at the heart of the Abu Dhabi Declaration on Human Fraternity, signed in 2019, and is the central theme of his encyclical “Fratelli Tutti,” published in 2020.

Speaking of the visit on Feb. 25, Archbishop Bashar Matti of Erbil told journalists: “The pope knows where he is going. He is deliberately coming to an area marked by war and violence to bring a message of peace.”

“The pope knows where he is going. He is deliberately coming to an area marked by war and violence to bring a message of peace.”

Francis is expected to give powerful expression to that message of peace and reconciliation when he prays in the devastated city of Mosul on March 7, at the epicenter of the genocidal violence against the Yazidis and the violent persecution against Christians and other minorities that was unleashed by the Islamic State starting in August 2014 when they gained control of the city, the surrounding villages and countryside. They took thousands of captives, raped women and young girls, killed men who resisted and ruled with violence until 2017, when they were forced out by the combined forces of Iraqi Shias, Kurds and the Iraqi army with international support.

Francis knows the terrible sufferings experienced by the Yazidis in the area nearby. He learned about it from Nadia Murad, the first Iraqi and Yazidi to win the Nobel Peace Prize in 2018, whom he has met at least twice. She gave him an autographed copy of her memoir, Last Girl, which tells of her captivity by ISIS in 2014 and her fight against the Islamic State.

When in October 2014, Dabiq, the magazine of ISIS, carried a cover photo showing the group’s black flag flying above St. Peter’s Square, they could not have imagined that less than four years later Pope Francis would pray in the liberated city of Mosul. He will pray not only for the victims of that regime of terror but also for all the victims of war in Iraq. It will be a poignant moment, as will the subsequent prayer service at the church in the Christian village of Qaraqosh.

From there, Francis will travel to Erbil, the capital of the Kurdish autonomous region, where he will celebrate Mass in a stadium for a congregation of some 5,000 people (less than one-sixth of the stadium’s capacity), fully respecting the government and church norms for safety in the pandemic.

Pope Francis’ visit to Iraq is unprecedented in many ways. He is the first pope ever to visit this ancient biblical land.

Some people, including distinguished medical experts, have questioned the wisdom of Pope Francis, a world leader and moral authority, going to Iraq at this time of pandemic. Responding to questions on this, Matteo Bruni, the Vatican spokesman, said at a briefing on the visit that “all the measures that have been requested and put in force by the Iraqi government and church authorities have been respected in organizing the visit and will be respected throughout the journey.”

Mr. Bruni said that “perhaps the best way to interpret this journey is as an act of love for this people, for these Christians.” He noted, “Every act of love can be interpreted as extreme but also as an extreme confirmation of that love and the need to be loved.” He emphasized that “it is possible to measure the need of the other to receive confirmation of that love, consideration and attention”and said “[such confirmation] is the mission of the Successor of Peter.”

Pope Francis’ visit to Iraq is unprecedented in many ways. He is the first pope ever to visit this ancient biblical land. He knows he is taking considerable risks, both from a security and health perspective, but he feels an inner call to visit and console this people that have suffered so much and to offer hope by pointing the way to a better future through working for reconciliation and peace and learning to respect and treat each other as brothers and sisters, children of the one God.