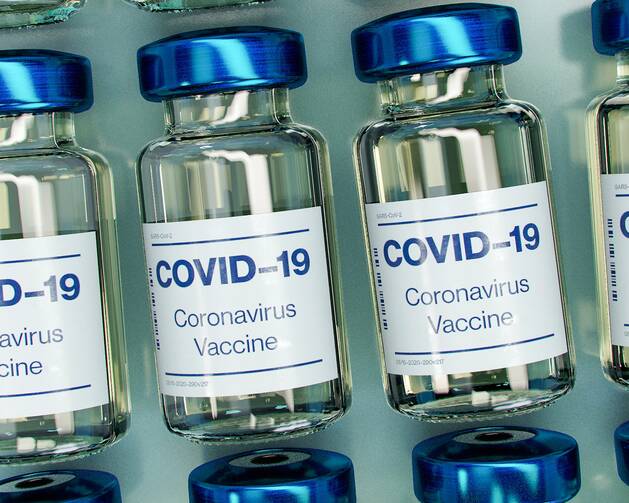 The day before the Food and Drug Administration granted emergency authorization to a Covid-19 vaccine manufactured by Johnson & Johnson, the Archdiocese of New Orleans published an unsigned statement to its website saying Catholics should be leery of the new vaccine, pointing to the vaccine manufacturer’s use of fetal cell lines with connections to decades-old abortions. But some church leaders say the warning from the archdiocese, and subsequent statements from other bishops, fail to take into account the conditions currently facing people living in the United States and undermine the best available options to save lives.

“We have to keep in mind that more than 500,000 people are dead, and the urgency to establish widespread vaccination is extreme,” Lisa Fullam, who teaches moral theology at the Graduate Theological Union, told America. “That doesn’t mean anything goes, but it does mean the situation we’re facing is really serious and will continue to cost more lives unless people step up to get vaccinated.”

On Feb. 26, the Archdiocese of New Orleans called the Johnson & Johnson vaccine “morally compromised as it uses the abortion-derived cell line in development and production of the vaccine as well as the testing” and urged Catholics to consider taking other vaccines if they are given a choice. On March 2, the chairmen of two U.S. Conference of Catholic Bishops subcommittees released a statement echoing the New Orleans statement, saying, “If one has the ability to choose a vaccine, Pfizer or Moderna’s vaccines should be chosen over Johnson & Johnson’s.”

Those statements seem to refer to debate over the use of what are referred to as HEK293 cells, which reportedly trace their origins to an aborted fetus from the 1970s. Scholars and ethicists have noted that HEK293 and similar cell lines are clones and are not the original fetal tissue.

At this point in the vaccine distribution program, Catholics in the United States and elsewhere do not have a choice in which vaccine they receive.

But at this point in the U.S. vaccine distribution program, people in the United States and elsewhere do not have a choice as to which vaccine they receive. With demand vastly outpacing supply, who is eligible for a vaccine remains limited in nearly every state. On Tuesday, President Joe Biden announced that the U.S. should have enough vaccines for every American by the end of May, in part, because of an agreement to expedite the manufacturing of the Johnson & Johnson vaccine.

Anthony Egan, S.J., a Jesuit priest and lecturer in theology in South Africa, said church leaders publishing messages about hypothetical situations during a crisis is “unhelpful” as Catholics navigate life in a pandemic.

The choice about taking a vaccine like Johnson & Johnson’s must come down to individual conscience, he said. “I think it’s irresponsible to make a claim that you must absolutely not or absolutely must take the drug,” he said.

Ms. Fullam agreed, saying modern life is filled with difficult dilemmas stemming from previous injustices and “one of the great things about the Catholic moral tradition is that we recognize the world is a messy place, but we don’t insist Catholics stay away from that messiness.” Catholics, she said, are called “to think about how to make the situation better” rather than retreat in the face of complexity and given the ongoing pandemic, receiving a vaccine with a remote connection to abortion could be the right decision—especially in communities where access to vaccines might be difficult.

“This kind of moral scare-mongering can cost lives, especially among people who might not have access to the vaccine otherwise,” she said, pointing specifically to poorer regions in the United States and countries with fewer resources.

“This kind of moral scare-mongering can cost lives, especially among people who might not have access to the vaccine otherwise,” Lisa Fullam said.

The two other vaccines approved for use in the United States, created by Moderna and Pfizer, used some controversial cells in testing its vaccines but not in their creation, leading the U.S.C.C.B. to give a nod of approval to those vaccines last November over the objections of some Catholic leaders who suggested that even a tenuous connection to the cell lines made those vaccines immoral.

Then in December, the Vatican said in a statement from the Congregation for the Doctrine of the Faith that “it is morally acceptable to receive Covid-19 vaccines that have used cell lines from aborted fetuses in their research and production process” when “ethically irreproachable” vaccines are unavailable. Examples of a vaccine being “unavailable” include places where vaccines that did not rely on what the church considers problematic cells are not approved for use, where it might be difficult to store or distribute certain vaccines or where “health authorities do not allow citizens to choose the vaccine with which to be inoculated.”

The recent statements from New Orleans and the U.S.C.C.B. seem to echo the Vatican statement, but they are more vague in their language when it comes to vaccine choice. The New Orleans statements says, “We advise that if the Moderna or Pfizer vaccine is available, Catholics should choose to receive either of those vaccines rather than to receive the new Johnson & Johnson vaccine because of its extensive use of abortion-derived cell lines.”

Therese Lysaught, a professor of bioethics and health policy at the Stritch School of Medicine at Loyola University Chicago and a member of the Pontifical Academy for Life, said the church has been consistent in its approval of vaccines with ties to controversial cell lines for at least 15 years. “It’s always good to ask questions, but my position is, this question has been answered over and over and over again.” She said that the Vatican has been clear that receiving vaccines is morally just—and that was well before a global pandemic.

“My reading of the tradition is that absolutely Catholics should feel fine taking the Johnson & Johnson vaccine if that’s what they’re offered,” she said, pointing out that most people will not have a choice anyway.

Claiming that vaccines that used cells derived from an aborted fetus for testing are moral but vaccines that were created with those cells are immoral “seems to be a distinction without a difference,” she said. Catholics are called to make sure there is sufficient distance between their actions and actions the church would consider to be immoral.

The statements from New Orleans and the U.S.C.C.B. suggesting that Catholics have a choice in their vaccines could cause confusion as the vaccine rollout continues. What would be more helpful, said a member of an advisory group that assists the Vatican with communications, is a clear and concise message that vaccination is an important part of caring for the common good.

“We’re in the midst of a deadly pandemic that has cost hundreds of thousands of lives, devastated families and plunged many into economic crisis. Vaccines are our best hopes to overcome this suffering.”

“We’re in the midst of a deadly pandemic that has cost hundreds of thousands of lives, devastated families and plunged many into economic crisis. Vaccines are our best hopes to overcome this suffering,” said Kim Daniels, the co-director of the Initiative on Catholic Social Thought and Public Life at Georgetown University. “So our message needs to be clear: Get vaccinated as soon as you can. It's vital for each one of us, and for our families and communities, and especially for the protection of the poor and vulnerable.”

The impact that statements from bishops will have on vaccines remains unclear.

On Tuesday, the University of Notre Dame announced that it would serve as a mass vaccination site for people who reside in the South Bend, Ind., area later this month.

“The Notre Dame community remains committed to doing our part to help fight the pandemic on campus and beyond,” the university’s president, John I. Jenkins, C.S.C., said in a press release, which also noted, “The one-shot Johnson & Johnson vaccine will be provided to those who meet the state’s age and other eligibility guidelines at the time.

Correction, March 2: An earlier version of this report mistakenly stated the supply of the Covid-19 vaccines outpaces the demand.