On the ‘Today’ show, Cardinal Gregory reflects on his personal experience with racism 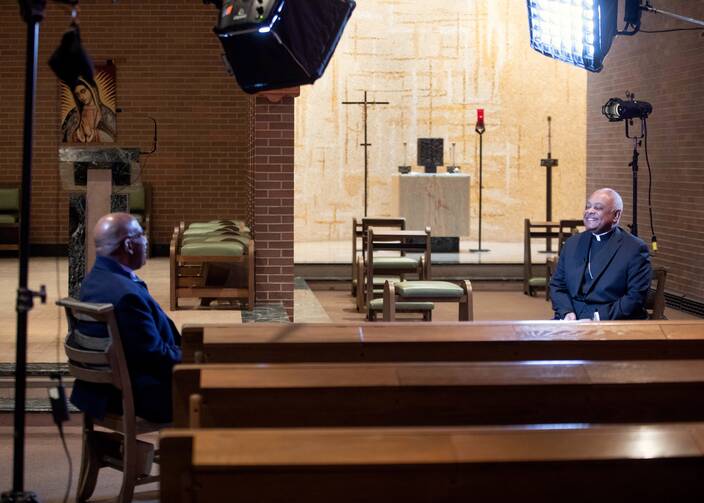 HYATTSVILLE, Md. (CNS) -- In a Feb. 15 segment for the "Today" show's "Changemakers" and "Black Voices" series, Cardinal Wilton D. Gregory of Washington reflected on his faith journey and on his own experiences with racism.

He described his race as a common denominator for how he is judged, along with "every other African American man in Washington," when he is not wearing the clothes that identify him as a member of the clergy.

The interview was conducted by Al Roker, weather forecaster and co-host of the "Today" show.

Roker asked the cardinal about his path to the priesthood, which began when he was a student in Catholic school in Chicago and was inspired by the example of the priests and women religious there; about his pastoral role in relation to the president of the United States; about his status as the first African American to be made a cardinal; and whether he has experienced racism.

"I don't know of any African American who hasn't tasted the bitter cup of discrimination," Cardinal Gregory said.

He added that as long as he is dressed as a member of the clergy, "I'm treated with great respect and affection. But if I take off my clerics to go out, to go shopping or run an errand, I'm in the pool of every other African American man in Washington."

The cardinal told of one occasion, perhaps 15 years ago, when he was invited to a Palm Springs golf club. Dressed to play golf, he went to open the trunk of his car. Someone approached and said to him, "'You can put my clubs on the golf cart.' I had to say, 'Well, I can have somebody retrieve your clubs, but I'm here to play golf.' I never forgot that."

Such experiences are healthy reminders for him, he said. "It's good for me not to lose a grounding in the experience of what it means to be an African American man in our country."

The interview with Roker, who noted that he is Catholic, was recorded in January at the chapel in the Archdiocese of Washington's Pastoral Center in Hyattsville, Maryland, just outside the District of Columbia.

Cardinal Gregory and Roker also discussed how the cardinal would interact with President Joe Biden as a Catholic in his archdiocese. The cardinal said he knows there will be times when they will disagree, but he doesn't expect their paths to cross frequently.

"He's not going to be on speed dial, and I hope I'm not on his speed dial," he said. "But there will be moments when I will be able to speak to him about faith, about the works that he is trying to accomplish that we can be supportive of, but also areas where we're not going to agree. But I'm going to always try to do it in a respectful way."

A clip was shown of Cardinal Gregory offering a prayer at a memorial service Jan. 19 at the Lincoln Memorial Reflecting Pool to remember the 400,000 Americans who had died of the coronavirus at that point. Standing nearby at the memorial service were Biden and Kamala Harris, joined by their spouses, one day before the new president and vice president were inaugurated.

Cardinal Gregory said his message to the nation at that service was: "If we're going to heal, we have to remember we have to heal together."

The cardinal said that while he was at the Vatican for his elevation as cardinal in November, "there were so many thoughts going through my heart and mind. I thought about my mom and dad, family members, my grandmother. It was very humbling."

Noting that some people wondered why it took so long for an African American to be made a cardinal, Washington's archbishop said it was a reminder that the Catholic Church, like the rest of the world, continues to grapple with racism and exclusion.

Catholic Standard Staff
Show Comments ()
Join the conversation: Login or create an account
Before you can comment, you need to update your profile to include your first and last name, as required in our comments policy. Then reload this page and you'll be set up for commenting. Update your profile