Pope Francis: Failure to remember the Holocaust will lead to the same horrors 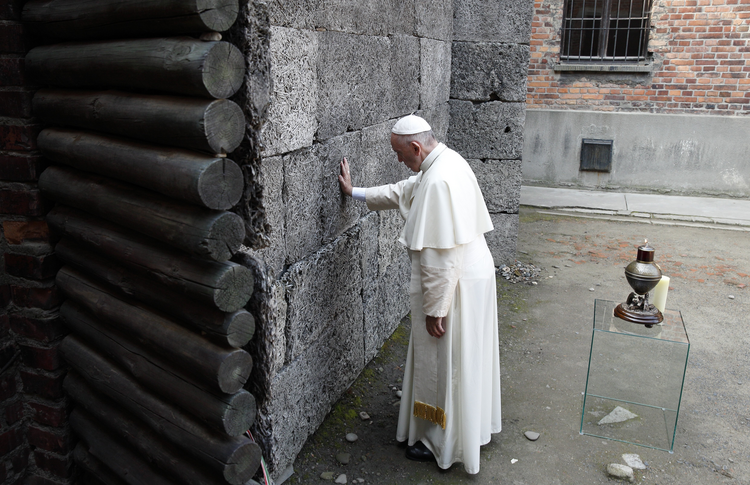 Pope Francis touches the death wall at the Auschwitz Nazi death camp in Oswiecim, Poland, in this July 29, 2016, file photo. The pope said remembering the Holocaust and its victims is not only an "expression of humanity" but also makes people aware that such horrors may happen again. The pope's comments came at his general audience as he commemorated International Holocaust Remembrance Day Jan. 27. (CNS photo/Paul Haring)

VATICAN CITY (CNS) -- Remembering the Holocaust and its victims is not only an act of solidarity but also serves as a warning to humanity that such horrors could happen again, Pope Francis said.

Before concluding his weekly general audience Jan. 27, the pope marked the observance of International Holocaust Remembrance Day by calling on the world to "remember the Shoah" and to "be aware of how this path of death began, this path of extermination, of brutality."

"To remember also means to be careful because these things can happen again, starting with ideological proposals to save a people and ending up destroying a people and humanity," he said.

International Holocaust Remembrance Day is observed around the world Jan. 27, the anniversary of the liberation in 1945 of the Auschwitz-Birkenau concentration camp in Oswiecim, Poland.

Remembering the Holocaust and its victims is not only an act of solidarity but also serves as a warning to humanity that such horrors could happen again, Pope Francis said.

Operated from 1940 to 1945, Auschwitz was the Nazi's largest camp and consisted of three parts: Auschwitz I, where many were imprisoned and murdered; the Birkenau extermination camp -- also known as Auschwitz II -- and Auschwitz III (Auschwitz-Monowitz), an area of auxiliary camps that included several factories.

Beginning in 1942, Auschwitz became the site of the mass extermination of over 1 million Jews, 23,000 Roma, 15,000 Soviet prisoners of war and thousands of Polish citizens.

The Nazi's systematic persecution and genocide led to the deaths of 6 million Jews in Europe.

Commemorating the victims of the Holocaust, the pope said the act of remembering is "an expression of humanity" and "sign of civility."

Remembering "is a condition for a better future of peace and fraternity," he said.

The pope called on the world to "remember the Shoah" and to "be aware of how this path of death began, this path of extermination, of brutality."

"Today, as hateful voices continue to rise, denying or distorting the implacable reality of these facts, we have a universal responsibility to remember each and every individual whom the Nazis sought to erase from the face of the earth," Azoulay said.

The day, she added, is also time to reflect "upon the choices of the individuals and governments that allowed this genocide to unfold."

"It is also a call for vigilance and for action, to address the root causes of hatred and prevent future atrocities from happening," she said.

In Germany, Catholic bishops marked Holocaust Remembrance Day with a call for decisive action against all forms of anti-Semitism.

"The memory of the Holocaust fills me with profound sorrow but also with shame because so many remained silent at the time," the president of the German bishops' conference, Bishop Georg Bätzing, wrote on Twitter and Facebook.

He called on all people to join together to courageously oppose "anti-Jewish prejudice, conspiracy myths and every form of hatred in everyday life, at school or among friends."

The "industrial murder of the Jews" had been at the end of a path "that began with hate speech, conspiracy myths and social exclusion. We must never go down that path again."