Interview: Assisi archbishop on the pope’s new encyclical and devotion to St. Francis 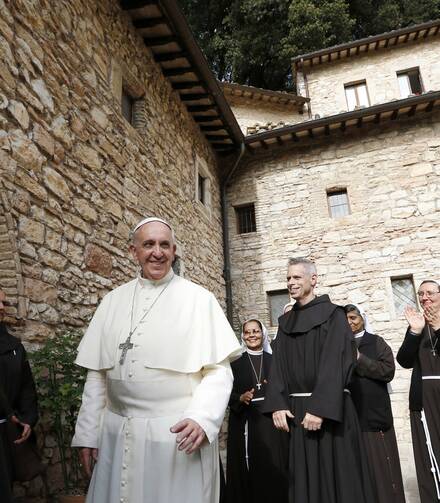 Pope Francis greets religious as he leaves the hermitage and cell of St. Francis in Assisi, Italy, in this Oct. 4, 2013, file photo. The pope plans to visit Assisi on Oct. 3 to celebrate a private Mass and sign his new encyclical on human fraternity. (CNS photo/Paul Haring)

Pope Francis will travel to Assisi next Saturday afternoon, Oct. 3, to celebrate Mass and sign his new encyclical, “Fratelli Tutti,” at the tomb of the saint who died and was buried here almost 800 years ago and from whom Pope Francis took the inspiration for this much-awaited magisterial text.

While Pope Francis’ previous visits attracted thousands of people, numbers will be significantly lower this time because of the strict safety guidelines imposed by both the Italian government and the Vatican to protect people from the Covid-19 pandemic. Only a limited number of persons will be allowed in the Basilica of St. Francis to witness this historic event. The archbishop of Assisi, Domenico Sorrentino, is one of them. He knows the pope well, having met him on his previous three visits here and also in the Vatican, where he worked from 1992 to 2001 in the Secretariat of State during the pontificate of John Paul II.

In this exclusive interview, conducted over Skype, the archbishop spoke to America about the pope’s short visit and the new encyclical. More than a dozen popes have visited Assisi down through the centuries, including Francis’ two immediate predecessors, but “Francis is the first pope ever to sign an encyclical here,” the archbishop said.

Archbishop Sorrentino: "We are experiencing anew that we are all brothers and sisters in the pain and difficulties it brings, and we are learning that we must help each other in love to emerge from it.”

Archbishop Sorrentino said he was not surprised that Francis has written an encyclical on the theme that “we are all brothers and sisters, children of the one God and Father, because this is very much present in his magisterium.” He recalled that Francis “has spoken many, many times about fraternity,” and in “Evangelii Gaudium,” the programmatic document for his pontificate published in November 2013, “he put strong emphasis on the way we must live our relationship with one another in a fraternal way, [even] in the economic dimension.”

Moreover, he said, the pope wrote the 2015 encyclical “Laudato Si’” to address the care of our common home and care for the environment, “and took the perspective of St. Francis, of the universal cosmos, so to say, fraternity, as he does for this new encyclical also.”

Archbishop Sorrentino said he has had “the privilege of speaking to the pope several times about St. Francis, from whom he has taken his name.” He told him that the bishop’s residence in Assisi where he is now living “was the residence where the young Francis was received by my predecessor, Bishop Guido.”

Archbishop Sorrentino said he was not surprised that Francis has written an encyclical on the theme that “we are all brothers and sisters, children of the one God and Father, because this is very much present in his magisterium.”

He recalled that after Francis’ election as pope, Francis organized his first visit to Assisi for the feast day of the saint, Oct. 4, 2013. “When the visit was already almost organized, he received me in Santa Marta and I presented him with a little book with a picture of the meeting of my predecessor Guido and Francis on the book’s cover; the picture was of a fresco by Giotto, the famous Italian artist.”

The archbishop told Francis, “Many popes have come to Assisi, but none has ever come to the bishop’s residence where St. Francis stripped off his clothes” and urged him, “please come just for ten minutes to pray an Our Father in that room where the young Francis said ‘no more father Bernardone’ (his natural father), ‘but our Father in heaven.” He said the pope “looked in my eyes and told me, ‘I want to come because I want to speak about how the church must strip itself.’”

The archbishop recalled that Pope Francis was “deeply touched when he was in the room where St. Francis stripped off his clothes.” Sometime later, when the archbishop informed him that he had transformed that same room into “a shrine of the renunciation,” Francis responded with a letter in which he revealed that he had a deep spiritual experience in that very place and said, “When I was there as a pope with the name of Francis, I relived what Francis had lived with that prophetic gesture of renunciation.”

The archbishop predicted that “‘Fratelli Tutti’ will convey a profound message. Its title comes from a quotation of St. Francis. The encyclical is about human fraternity, and when we speak of fraternity in Christian terms, we speak of the universal fatherhood of God; God is father in the way that Christ revealed to us.”

He noted that “in all religions there is something like that, because religious people consider God as Creator and so already there is something that has to do with fraternity. But, as Christians, we must remember that Jesus gave us a very special perspective on fraternity because he is the son of God made flesh, and in Jesus we see the face of the father, as the Gospel account tells us. And through Jesus we are brothers in a very special way, in a very strict way, as a sign of the unity of our life with God, of the unity of all humankind, as ‘Lumen Gentium,’ the Vatican II constitution on the church, says.”

The Feast of St. Francis of Assisi
James Martin, S.J.

When Pope Francis went to Abu Dhabi in February 2019, he signed the “Document on Human Fraternity” with the Sheik of Al-Azhar, Ahmed el-Tayeb. On that occasion, he emphasized that “the point of departure is the recognition that God is at the origin of the one human family. He who is the Creator of all things and of all persons wants us to live as brothers and sisters, dwelling in the common home of creation which he has given us.”

“Fraternity is established here at the roots of our common humanity, as ‘a vocation contained in God’s plan of creation.’ This tells us that all persons have equal dignity and that no one can be a master or slave of others,” the pope said.

The archbishop concluded the interview by saying he expects the encyclical “to offer a very significant word of hope for people everywhere in a world where there are still so many wars and tensions.” This is an especially important message during the pandemic, as “we are experiencing anew that we are all brothers and sisters in the pain and difficulties it brings, and we are learning that we must help each other in love to emerge from it.”