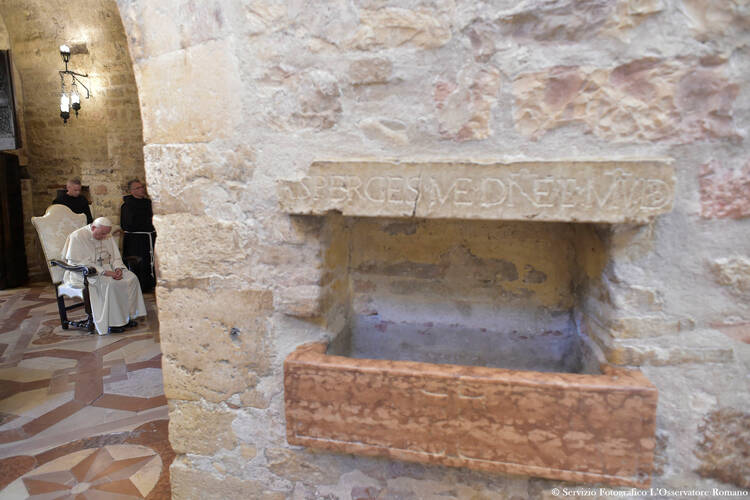 “In this year of mercy, it becomes ever clearer that the path of forgiveness can truly renew the church and the world,” Pope Francis said in his homily in the Basilica of St. Mary of the Angels at Assisi on August 4. “To offer today’s world the witness of mercy is a task from which none of us can feel exempted.

“The world needs forgiveness; too many people are caught up in resentment and harbor hatred because they are incapable of forgiving. They ruin their own lives and the lives of those around them rather than finding the joy of serenity and peace,” he added.

The pope flew by helicopter from the Vatican to Assisi Thursday afternoon to pray inside the little chapel of the Porziuncola (now housed inside the basilica) that St. Francis restored 800 years ago. Francis had experienced a mystical vision in the chapel of San Damiano, two miles away, in which he heard the crucified Christ tell him three times, “Francis, Francis, go and repair my house which, as you can see, is falling into ruins.” The saint understood this to mean the Porziuncola chapel and so he repaired it.

This place became the cradle of the Franciscan order, and later the saint obtained from Pope Honorius III an indulgence for all who visited it. That indulgence has been known ever since as “The Pardon of Assisi” and can be gained during the first days of August.

St. Francis dedicated St. Clare of Assisi to Jesus in the Porziuncola chapel in 1211, and years later, knowing his death was approaching, he asked to be brought back here and died, in his nearby cell, at sunset on Oct. 3, 1226.

This afternoon in the basilica, in front of the Porziuncola, the first pope ever to be called Francis prayed in the little chapel and then delivered a homily on pardon to the Franciscan bishops and superiors, nuns, clergy, laypeople and many pilgrims present. At one point during his homily, Francis departed from his prepared text,looked up and commented, “How truly difficult it is for us to pardon those who have done us wrong!”

After the ceremony inside the basilica, he greeted the Franciscan bishops and superiors and also the many pilgrims gathered in the square outside before taking the helicopter back to the Vatican.

Below is the complete text of his homily, provided by the Vatican.

Today I would like, before all else, to recall the words that, according to an ancient tradition, Saint Francis spoke in this very place, in the presence of all the townsfolk and bishops: “I want to send you all to heaven!” What finer thing could the Poor Man of Assisi ask for, if not the gift of salvation, eternal life and unending joy, that Jesus won for us by his death and resurrection?

Besides, what is heaven if not the mystery of love that eternally unites us to God, to contemplate him forever? The Church has always professed this by expressing her belief in the communion of saints. We are never alone in living the faith; we do so in the company of all the saints and of our loved ones who practiced the faith with joyful simplicity and bore witness to it by their lives. There is a bond, unseen but not for that reason any less real, which makes us, by baptism, “one body” moved by “one Spirit” (cf. Eph 4:4). When Saint Francis asked Pope Honorius III to grant an indulgence to all who visited the Porziuncola, he was perhaps thinking of Jesus’ words to the disciples: “In my Father’s house are many rooms; if it were not so, would I have told you that I go to prepare a place for you? And when I go and prepare a place for you, I will come again and will take you to myself, that where I am you may be also” (Jn 14:2-3).

Forgiveness—pardon—is surely our direct route to that place in heaven. Here at the Porziuncola everything speaks to us of pardon! What a great gift the Lord has given us in teaching us to forgive and in this way to touch the Father’s mercy! We have just heard the parable where Jesus teaches us to forgive (cf. Mt 18:21-35). Why should we forgive someone who has offended us? Because we were forgiven first, and of infinitely more. The parable says exactly this: just as God has forgiven us, so we too should forgive those who do us harm. So too does the prayer that Jesus taught us, the Our Father, in which we say: “Forgive us our debts, as we also have forgiven our debtors” (Mt 6:12). The debts are our sins in the sight of God, and our debtors are those whom we, for our part, must forgive.

Each of us might be that servant in the parable burdened with so great a debt that he could never repay it. When we kneel before the priest in the confessional, we do exactly what that servant did. We say, “Lord, have patience with me.” We are well aware of our many faults and the fact that we often fall back into the same sins. Yet God never tires of offering us his forgiveness each time we ask for it. His is a pardon that is full and complete, one that assures us that, even if we fall back into the same sins, he is merciful and never ceases to love us. Like the master in the parable, God feels compassion, a mixture of pity and love; that is how the Gospel describes God’s mercy towards us. Our Father is moved to compassion whenever we repent, and he sends us home with hearts calm and at peace. He tells us that all is remitted and forgiven. God’s forgiveness knows no limits; it is greater than anything we can imagine and it comes to all who know in their hearts that they have done wrong and desire to return to him. God looks at the heart that seeks forgiveness.

The problem, unfortunately, comes whenever we have to deal with a brother or sister who has even slightly offended us. The reaction described in the parable describes it perfectly: “He seized him by the throat and said, ‘Pay what you owe!’” (Mt 18:28). Here we encounter all the drama of our human relationships. When we are indebted to others, we expect mercy; but when others are indebted to us, we demand justice! This is a reaction unworthy of Christ’s disciples, nor is it the sign of a Christian style of life. Jesus teaches us to forgive and to do so limitlessly: “I do not say to you seven times, but seventy times seven” (v. 22). What he offers us is the Father’s love, not our own claims to justice. To trust in the latter alone would not be the sign that we are Christ’s disciples, who have obtained mercy at the foot of the cross solely by virtue of the love of the Son of God. Let us not forget, then, the harsh saying at the end of the parable: “So also my heavenly Father will do to every one of you, if you do not forgive your brother from your heart” (v. 35).

Dear brothers and sisters, the pardon of which Saint Francis made himself a “channel” here at the Porziuncola continues to “bring forth heaven” even after eight centuries. In this Holy Year of Mercy, it becomes ever clearer that the path of forgiveness can truly renew the Church and the world. To offer today’s world the witness of mercy is a task from which none of us can feel exempted. The world needs forgiveness; too many people are caught up in resentment and harbor hatred, because they are incapable of forgiving. They ruin their own lives and the lives of those around them rather than finding the joy of serenity and peace. Let us ask Saint Francis to intercede for us, so that we may always be humble signs of forgiveness and channels of mercy.

Gerard O’Connell
@gerryorome
Show Comments (
2
)
Comments are automatically closed two weeks after an article's initial publication. See our comments policy for more.
William Rydberg
6 years 6 months ago
Even though they don't think they do. The Apostolic Fathers taught that it is the Spirit convinces as to sin. Even Jesus-God come in the flesh said that not a jot or tittle of the moral law was revoked. Perhaps we have to reexamine the quality of our catechesis. Its my opinion that Pope Francis at times sounds like a German. Not where you want to be, latest stats show that the German Church is shrinking very fast. Better off emulating the renascent American Church. in Christ,
Beth Cioffoletti
6 years 5 months ago
thank you so much, Kevin, for relaying in their entirety, Pope Francis' words in Assisi. I often ask myself what other theologian or spiritual guide do I need? Francis' words get to the very heart of my dilemma -- and in such intimate detail!. What a grace it is to live during these times and with the gift of Francis.

Confession: The Act of Contrition and words of absolution to get a new translations starting this Lent
The experience of the sacrament of penance in the Roman rite will be slightly different this Lent, thanks to approved changes in the English translation set to take effect in a few weeks.
Gina Christian – OSV NewsJanuary 31, 2023