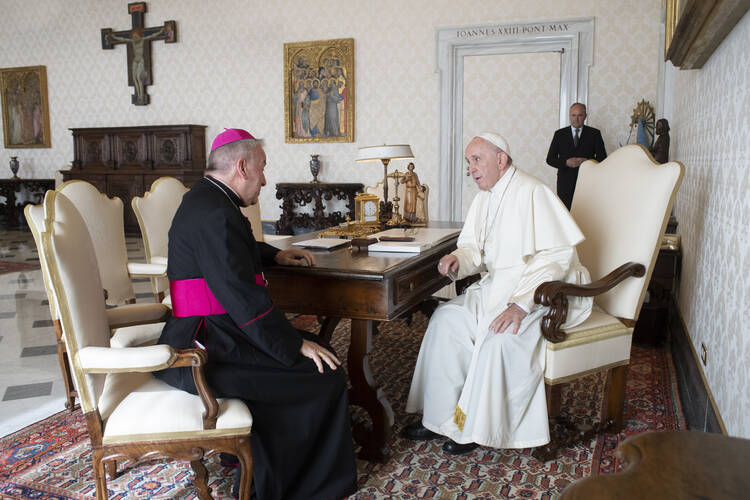 Archbishop Luigi Ventura, the papal nuncio to France, meets with Pope Francis at the Vatican in this file photo from Oct. 18, 2018. (CNS photo/Vatican Media)

The former Vatican nuncio in France, Archbishop Luigi Ventura, 75, will stand trial in Paris on Nov. 10 on charges of alleged “sexual aggression” against four men, Agence France-Press and other French media, including Le Monde, reported today, based on information from judicial sources.

The former Vatican nuncio to France, Archbishop Luigi Ventura, 75, will stand trial in Paris on Nov. 10 on charges of alleged “sexual aggression” against four men.

“He will be present at the hearing. He hopes to defend his honor and his innocence at that hearing,” Bertand Ollivier, the lawyer for the Italian archbishop, told AFP.

Archbishop Ventura, a senior and distinguished Vatican diplomat, served as the papal nuncio, or ambassador in France from 2009 to 2019. The first accusation against him was made before the judicial authorities in Paris in February 2019 by a young man who accused him of improper touching during a public ceremony in the French capital. The archbishop denied it, but the police investigation went ahead. Subsequently, allegations of a similar kind were made against him by two other men, who said they occurred in 2018. Soon after, a fourth man made similar allegations. In May 2019 the archbishop faced his accusers at a meeting called by the prosecutor, but that clearly did not convince the prosecution.

The Vatican, at Pope Francis’ instruction, removed his diplomatic immunity in July 2019 to enable him to defend himself in court. He will now have to respond to his four accusers at a trial in Paris in November.

It is the first time in the modern history of papal diplomacy that a nuncio of the Holy See will stand trial in a civil court.

The Vatican recalled Archbishop Ventura to Rome in late 2019, and Pope Francis accepted his resignation the following December “for reasons of age.” He had reached the age of retirement in the service and, in addition, had been in ill health for some time.

According to AFP and other French media, Jade Dousselin, the lawyer for one of the accusers, declared the decision to have the former nuncio stand trial “a victory.” He said the prosecutor has confirmed “what we affirmed from the first moment,” and “it is a comfort to the victims who took the initiative to denounce him.”