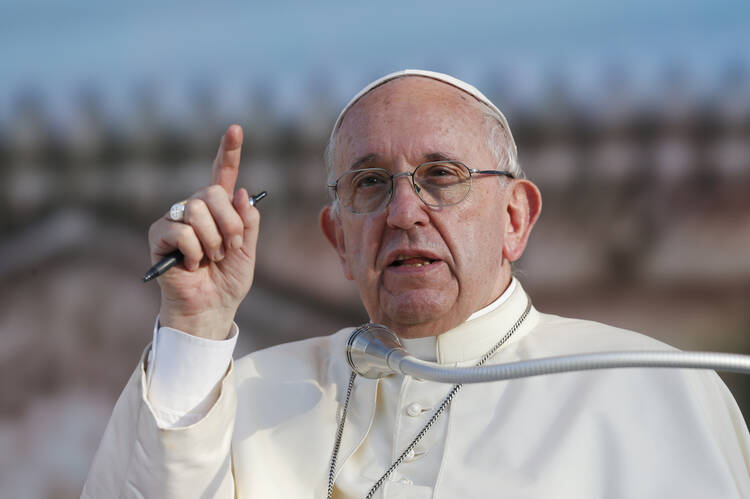 Cardinal Angelo Scola, the runner-up in the last papal conclave, has twice in recent weeks come out strongly against those, especially within the church, who frequently and increasingly attack Pope Francis. “It’s a very strong sign of contradiction and denotes a certain weakening of the people of God, above all of the intellectual class,” he said. “It is a profoundly wrong attitude because it forgets that ‘the pope is the pope.’”

“It is not by affinity of temperament, of culture, of sensibility, or for friendship, or because one shares or does not share his affirmations that one acknowledges the meaning of the pope in the church,” the cardinal said in an interview published on the Archdiocese of Milan’s website on the occasion of the 50th anniversary of his priestly ordination on July 18.

“[The pope] is the ultimate, radical and formal guarantor—certainly, through a synodal exercise of the Petrine ministry—of the unity of the church,” the cardinal, theologian and former rector of the Pontifical Lateran University stated.

Cardinal Angelo Scola, the runner-up in the last papal conclave, has come out strongly against those who frequently and increasingly attack Pope Francis.

Then, referring to the countless ways in which attacks have been launched against Pope Francis in these years, the former cardinal-patriarch of Venice and archbishop of Milan declared, “I consider these forms of pronouncements, letters, writings, pretenses of judgments on his action, above all when they establish irritating comparisons with previous papacies, a decisively negative phenomenon that is to be eradicated as soon as possible.”

Both in the interview and in a new introduction to the second edition of his autobiography, Ho scommesso sulla libertà (“I Bet on Freedom”), written with the Italian journalist Luigi Geninazzi and released on June 13, the Italian cardinal emphasized that one has “to learn the Pope” (“imparare il papa”), an expression he said he got from St. John Paul II.

“It means to have the humility and the patience to empathize with his personal history, the way he expresses his faith, addresses us, and makes choices of leadership and governance,” Cardinal Scola said. He added that this is “even more necessary in relation to a Latin-American pope, who has a mentality and a different kind of approach than we Europeans.” He recalled that “something similar also happened with John Paul II.”

Cardinal Scola declared, “I truly consider admirable and moving the extraordinary capacity of Pope Francis to make himself close to everyone, and especially to the excluded, to those who are subjected to ‘the throw-away culture’ as he so often reminds [us] in his keenness to communicate the Gospel to the world.”

Cardinal Scola: “Ever since I was a child, I learned that ‘the pope is the pope,’ to whom the Catholic believer owes affection, respect and obedience.”

Moreover, he said, “some gestures of Pope Francis strike me very much and are certainly very significant for everyone, even for nonbelievers. Given my temperament, I would not be able to do them; but then each one has his own personality.”

In the introduction to his autobiography, the 78-year-old cardinal, who enjoyed a very close relationship with John Paul II and Benedict XVI, wrote, “Pope Francis seeks to shake up consciences by calling into question consolidated habits and customs in the church, each time raising the bar, so to speak.”

“This can cause some bewilderment and upset,” he said, “but the ever harder and more insolent attacks against his person, especially those that come from within the church, are wrong.”

Cardinal Scola added, “Ever since I was a child, I learned that ‘the pope is the pope,’ to whom the Catholic believer owes affection, respect and obedience, since he is the visible sign and secure guarantor of the unity of the church in the following of Christ.” Moreover, he said, “communion with the successor of Peter is not a question of cultural affinity, or human sympathy, or a sentimental feeling; rather it relates to the very nature of the church.”

Concluding his strong critique of attacks against Pope Francis, the cardinal went on to express concern over “the polemics and divisions that are becoming ever more bitter, also at the expense of truth and of charity.” But, he stated, “I do not see the risk of a schism; I fear instead a journey backward” to “the postconciliar debate between conservatives and progressives” over the legacy of Vatican II.

He sees the return of this in “the re-emergence in agitated tones” of “the sterile contraposition” between “the guardians of Tradition rigidly understood” and “the proponents of what is intended to be the adaptation of practice and doctrine to worldly demands.” But like Pope Francis, Cardinal Scola believes the way to overcome these tensions is to entrust oneself to the Holy Spirit, “who does not allow himself to be harnessed by the logic of the opposing camps.”