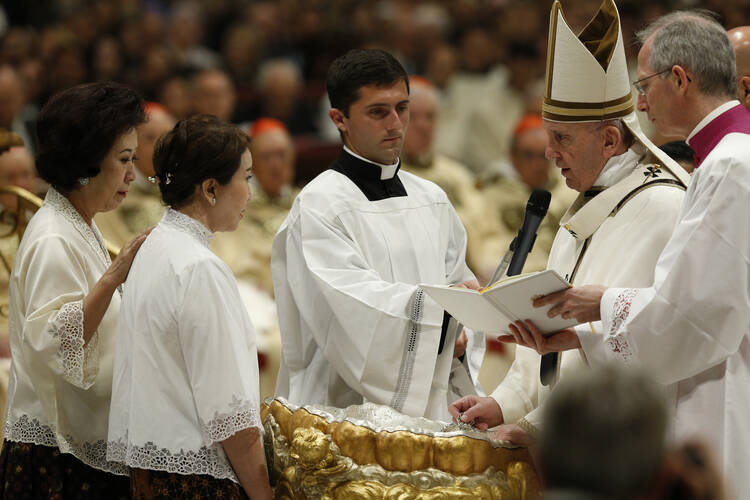 On Holy Saturday, thousands of catechumens and candidates in the United States will join the Catholic Church. The Easter Vigil is the “mother of all vigils,” according to the Roman Missal, and is the “greatest and most noble of all solemnities, and it is to be unique in every single church.” Every year, new members around the world are initiated into the church as it celebrates the triumph of Jesus Christ over sin and death. Catechumens are baptized, confirmed and receive first Communion. Candidates who were previously baptized in another Christian tradition become full members of the Catholic Church through a profession of faith and are also confirmed and receive first Communion.

Every year, new members around the world are initiated into the church as it celebrates the triumph of Jesus Christ over sin and death.

This is a joyful occasion, and we do not wish to dampen spirits with cold numbers. So please forgive the reminder that Catholics make up a dwindling percentage of Americans—from 23 percent in 2009 to 20 percent in 2019, according to one national survey. Weekly Mass attendance also continues to fall, from an estimated 24 percent of Catholics in 2015 to 21 percent in 2018. In fact, the number of adults who are joining the church in the United States each year has steadily declined since 2000, dropping below 100,000 for the first time in 2017. Some have speculated that the decline could be attributed to the dropping number of Catholic marriages, especially marriages between Catholics and non-Catholics.

Our new Catholics are signs of hope.

Despite these challenges, the overall number of Catholics in the United States continues to increase, now reaching more than 76 million. And those who enter the church as adults during the Easter Vigil are much more likely to stay Catholic. During that unique liturgical ceremony, the church dramatically draws attention to Christ as the light of the world, a sign of hope in dark times. Our new Catholics, too, are signs of hope. May they inspire all of us to share our faith and live it more deeply for years to come.