Pope Francis, a son of Argentina, welcomes its new president to the Vatican 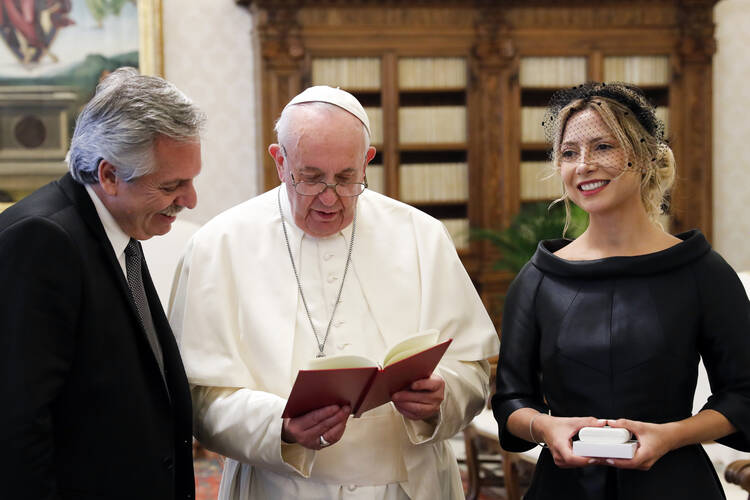 Pope Francis reads from his book Christus Vivit on the occasion of his private audience with Argentina’s President Alberto Fernandez, left, and his partner Fabiola Yanez, at the Vatican, Friday, Jan. 31, 2020. (Remo Casilli/Pool Photo via AP)

A smiling Pope Francis welcomed the new president of Argentina, Alberto Fernández, to the Vatican this morning and then spoke with him in a private audience for 45 minutes, signaling that good relations exist between the two leaders and suggesting that this could perhaps open the door for the pontiff’s first visit to his homeland since his election—though the president later said they did not discuss this.

“Holy Father, what a pleasure to see you again,” the Argentinian president said as they shook hands. Their private conversation lasted twice as long as that of Mr. Fernández’s predecessor, Maurizio Marci, with Francis in 2016. It was clear from the beginning that their discussion would focus on the dire economic situation in Argentina today, where the president has had to take immediate action to deal with the problem of widespread hunger.

It was expected that they would discuss the president’s decision to introduce legislation in the Argentine Congress to decriminalize abortion, a decision with which the Argentinian bishops strongly disagree. In addition to these issues, they were expected to also speak about the situation in Latin America, where Bolivia, Chile and Venezuela are in turmoil, as well as the difficult relations between Argentina and neighboring Brazil. Moreover, since the president had been in Jerusalem last week for the fifth World Forum on the Holocaust, in which some 45 world leaders participated, it is likely that they also talked about the situation in the Holy Land.

President Fernández said the debt owed by Argentina to the International Monetary Fund was one of the main topics that he discussed with Pope Francis.

The Vatican issued a statement several hours later that confirmed to a large extent that these were among the subjects the president discussed with the pope, and afterward with the Vatican secretary of state, Cardinal Pietro Parolin, and Msgr. Mirosław Wachowski, the undersecretary for relations with states.

The statement said that “during the cordial discussions, satisfaction was expressed over the good relations that exist between the Holy See and the Argentine Republic.” It revealed that they “examined the situation in the country, with particular reference to problems such as the economic-financial crisis, the fight against poverty, corruption and drug trafficking, efforts to build up society, and the protection of life from conception.” In this context, they “noted the significant contribution of the Catholic Church in favor of all in Argentine society, especially the more vulnerable sectors of the population.”

President Fernández said the debt owed by Argentina to the International Monetary Fund was one of the main topics that he discussed with Pope Francis and that they “also spoke much about poverty.” The president said, “I asked that he do what he could to help us, and he will do that.”

“The pope is an Argentinian concerned for his fatherland and for his people. He loves the Argentinians very much.”

He added that “the pope is an Argentinian concerned for his fatherland and for his people. He loves the Argentinians very much.” Mr. Fernández also said that he and Pope Francis had not discussed the question of abortion. As for polarization in the country, an issue that is also of great concern to the pope, the president said, “We Argentinians must respect each other and put an end to the folly of not doing so.”

When they ended their private conversation, the president presented his delegation to the pope, and they exchanged gifts. Mr. Fernández gave Francis a cloth made by persons with disabilities from the Granja Andar foundation, together with a book on the cafes of Buenos Aires and a statue of the black slave known as “Negrito Manuel,” the first devotee of Our Lady of Luján. Pope Francis presented Mr. Fernández with a bronze sculpture of an olive branch made in the Vatican with the wish that he may be “a messenger of peace” for his people. He also gave him copies of his main writings, including “The Joy of the Gospel,” “The Joy of Love” and “Laudato Si’.”

In addition, Francis took a copy of “Gaudete et Exsultate,” and told the president that he had marked a paragraph especially for him—the prayer of St. Thomas More on good humor. Francis then read it aloud for him:

Grant me, O Lord, good digestion, and also something to digest. Grant me a healthy body, and the necessary good humor to maintain it. Grant me a simple soul that knows to treasure all that is good and that doesn’t frighten easily at the sight of evil, but rather finds the means to put things back in their place. Give me a soul that knows not boredom, grumblings, sighs and laments, nor excess of stress, because of that obstructing thing called ‘I.’ Grant me, O Lord, a sense of good humor. Allow me the grace to be able to take a joke to discover in life a bit of joy, and to be able to share it with others.

Mr. Fernández, 60, was installed on Dec. 10 as the president of Argentina, the second largest country in South America, with a population of 44 million people. He had previously served as the chief of staff (2003-08) to President Néstor Kirchner for his entire presidency and then to President Cristina Fernández Kirchner in the first part of her term in office.

Mr. Fernández is a Catholic, and in his inaugural speech he used various expressions associated with Pope Francis, including “the throwaway culture” and “our common home.”

He is the third Argentinian president to visit the pope in the Vatican. Mr. Fernández is a Catholic, and in his inaugural speech he used various expressions associated with Pope Francis, including “the throwaway culture” and “our common home.” He has been called to govern a country that has significant material and human resources and in the early 1920s was among the world’s 10 richest countries but today endures a difficult socioeconomic situation. Forty percent of its people are living in poverty, and the country has contracted an immense debt to investors and to the I.M.F., a debt that the president is seeking to renegotiate.

Early this morning, before his audience with the pope, President Fernández attended Mass together with his delegation at the tomb of St. Peter, in the crypt under St. Peter’s basilica. Archbishop Sánchez Sorondo, the Argentine-born chancellor of the Pontifical Academy of Sciences, celebrated the Mass and surprised those present by recalling the memory of Juan Domingo Perón, the Argentinian leader whom the archbishop had met in Rome in 1973 and whom he considers to be “close” to Francis, though he said he had never even dreamt that an Argentinian would become pope one day.