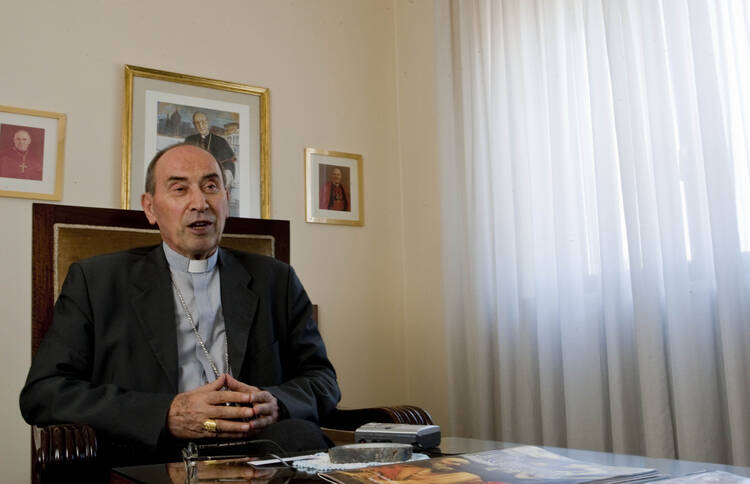 In this Aug. 25, 2011 file photo, the late Cardinal Velasio De Paolis, papal delegate for the Legion of Christ, speaks during an interview with The Associated Press in Vatican City. The latest scandal has exposed that the Vatican reform of the Legionaries of Christ charted by De Paolis failed in at least one key area: rooting out the culture of abuse and cover-up that enabled father Marcial Maciel's double life and allowed his crimes and the crimes of others to go unchecked for decades. (AP Photo/Domenico Stinellis, File)

MEXICO CITY (AP) — The administrator of the elite Catholic school in Cancun, Mexico, used to take the girls out of class and send them to the chapel, where the priest from the Legion of Christ religious order would sexually abuse them.

"As some were reading the Bible, he would rape the others in front of them, little girls aged 6 to 8 or 9," said one of his victims, Ana Lucia Salazar, now a 36-year-old Mexican television host and mother of three.

"Afterward, nothing was the same, nothing went back to the way it was," she said through tears at her home in Mexico City.

Salazar's horrific story, which has been corroborated by other victims and the Legion itself, has sparked a new credibility crisis for the once-influential order, 10 years after the Holy See took it over after determining that its founder was a pedophile.

But more importantly, it has called into question the Vatican reform itself: The papal envoy who ran the Legion starting in 2010 learned about the case nearly a decade ago and refused to punish or even investigate the priest or the superiors who covered up his crimes, many of whom are still in power and ministry today.

The scandal is not the story line the Legion was hoping for as it opened its general chapter Monday in Rome, a weeks-long gathering to choose new leaders and approve policy decisions going forward.

The assembly was supposed to have shown off the Legion embarking fully on its own after 10 years of Vatican-mandated reform. The Holy See imposed structural changes after revelations that the Legion's late founder, the Rev. Marcial Maciel, sexually abused at least 60 seminarians, fathered at least three children and built a secretive, cult-like order to cater to his whims and hide his double life.

The Cancun scandal, though, has exposed that the Vatican reform failed to address one key area: to punish known historic abusers and the people who covered for them, and change the culture of cover-up that enabled the crimes.

From the outset, the late papal envoy who ran the Legion, Cardinal Velasio De Paolis, refused to hold complicit Legion superiors accountable or investigate past abusers.

"De Paolis said there would be no witch hunt, explicitly, and the consequence is that abuse and its cover-up have remained unpunished," said the Rev. Christian Borgogno, a former Legion priest who co-founded the "Legioleaks" Facebook group where Salazar first went public in May. Borgogno said De Paolis' decision to leave in place Legion superiors, many of whom were close to Maciel, "made reform impossible."

"The only way out was to foster charismatic leaders, and they were even repressed," he told the AP. "That's the main reason why many of us left."

Following the AP story, the Legion announced on Monday it would conduct an investigation with the Vatican into the cover-up of the case, and vowed all superiors involved would cooperate.

Salazar, whose story has made headlines in Mexico, wants more: "What I want is for the pope to get radicalized," she said. "There's only one position, to be on the side of the violated children," not a religious order that has among its priests "villains, delinquents, rapists, accomplices and victimizers."

"The Legion of Christ has no reason to exist," she said, echoing calls from even within the church that the Vatican should have suppressed the order 10 years ago. "It's like taking apart a cartel; you have to remove the ringleaders and dismantle it."

Legion spokesman the Rev. Aaron Smith argued that the Legion's leadership had indeed changed over the past decade, noting that 11 priests are participating in the 2020 general chapter for the first time, and that most of the 66 participants are new to the assembly since the Vatican reform began. More than a dozen others, however, belong to Maciel's old guard.

Smith said the power structure of the Maciel era had been dismantled, with more decentralized authority and systems of checks and balances put in place.

"It would be practically impossible today to have actions like the ones which occurred during Maciel's tenure to go undetected," he said in emailed responses to questions, after declining an on-camera interview.

The scandal has struck the Legion at its core — Mexico — and cast a discrediting light where it hurts most: the Legion's prestigious private schools, which cater to Mexico's elite and are the order's main source of income. Former Legion priests say the scandal is a devastating blow that they long warned about, since a loss of credibility among wealthy Mexicans would deprive the Legion of its key base.

Already, the Mexican bishops conference has ended its silence about the Legion to denounce the newly revealed abuse and the Legion's failure to provide "a specific act of justice or reparation for the victims" even after it acknowledged the crimes, vowed more transparency and pointed to its child protection policies in place now.

The archbishop of Monterrey — a Legion stronghold — denounced the group's "criminal silence" and treatment of victims, and led recent calls from Mexican bishops for an end to the statute of limitations for child sex abuse cases. It was a remarkable turnabout, given that Mexico's Catholic hierarchy long supported the Legion and benefited from the once-wealthy order's largesse.

Even the Vatican's ambassador to Mexico, Monsignor Franco Coppola, broke the Holy See's tradition of diplomatic discretion to publicly criticize the Legion's handling of the case and call for the Vatican to investigate the "web of cover-up" behind it. That too was remarkable, given that the Vatican itself has been implicated in the Maciel cover-up.

Coppola also echoed calls from victims and the archdiocese of Monterrey for the Legion superiors implicated in the cover-up to at least stand down from the general chapter, calling it a "great gesture of humility," though until Monday none had accepted.

But on Monday evening, the Legion announced that the Rev. Eloy Bedia, who had been the Mexican superior who handled the complaints in the 1990s, had agreed to not participate in the meeting. But he also defended himself in a letter released by the order and noted that all personnel movements in the 1990s were decided by Maciel, not him.

Asked about the criticism from the Mexican hierarchy, Smith said the Legion welcomed the input as it seeks to improve its handling of past cases of abuse and prevention efforts going forward.

He said the general chapter would evaluate current child protection practices, ensure proper outreach to victims, and could mandate a continuation of the investigation into other cases of abuse of power by Legion superiors.

However, victims see such promises as nothing more than lip service, and dismissed the letters they received from the leadership after the scandal broke promising reparations and change. The Legion hasn't yet settled all requests for financial compensation from eight of Maciel's original victims, who made formal requests in 2018.

"My mother says that while I was jumping, it seemed like I was a butterfly, as if I were lifting the weight off, as if I were flying," Salazar said.

But Martínez had friends, chief among them Maciel, who it turns out had sexually abused him. Martínez was one of nearly a dozen Legion priests who were childhood victims of the founder and went onto molest other minors, a multi-generational chain of abuse that the Legion acknowledged last month.

Last week, the Legion announced that Martínez had asked to be defrocked, after an outside investigation determined he molested at least six girls in Cancun and that a series of Legion leaders, from the original bishop who took Salazar's complaint to De Paolis himself, decided against reporting him to police or even the Vatican. Martinez had been transferred from Cancun to a seminary in Spain, with no formal restrictions imposed after the Legion received the first reports.

De Paolis, one of the Vatican's top canon lawyers, then essentially became part of the cover-up: He had learned of the case between 2011-2013 when he was asked to take action against Martinez since no proper investigation had ever been conducted. But at the moment in which Martinez could have finally been brought to justice, De Paolis settled on inaction since no other complaints had been received, according to the investigation by the Praesidium firm. Martinez was subsequently transferred to Rome in 2016.

The current Legion superior, the Rev. Eduardo Robles Gil, apologized to Salazar for how her case was handled originally and all the subsequent "deficiencies."

"I could have remedied it starting in 2014, but I followed the decisions that were taken about abuse cases from previous decades, and we didn't reexamine it," he wrote her in November.

He forwarded a letter from Martínez to Salazar, in which her abuser begged her forgiveness "for the grave harm I caused you." He termed his behavior "faults" that were the result of an "uncontrolled sexuality."

Salazar was deeply offended, feeling the letters diminished the crimes and cover-up. "It was revictimizing to me, humiliating, disgusting."

After Salazar came forward, other Martínez victims broke their silence.

Their stories were no surprise to Beatriz Sánchez, an English teacher at Cancun's Colegio Cumbres in the early 1990s who heard about the rapes after discovering a group of his victims whispering — and weeping — in the bathroom.

"When one approached me she said: 'Miss, each time Father is doing it harder with the littlest ones and we don't want this to happen to them, please help us,'" Sanchez told AP.

She urged them to write it down — and then was promptly fired when she reported him to Martinez's then-superior, Bedia.

After Salazar went public, the school official who used to take the girls out of class to offer them up to Martinez was fired from her job at another Legion school.

One of the young victims was Biani López-Antúnez, whose mother had also reported the abuse to the Legion in 1993.

Irma Hassey said she hadn't pried for details when her daughter first revealed Martinez's abuse as a child, not wanting to hurt her further, and only learned the full extent in November.

Now, she said, she realizes with horror that for two years "I was leaving my daughter at the door of a rapist."

Nicole Winfield - Associated Press
Provide feedback on this article
Join the conversation: Login or create an account
Before you can comment, you need to update your profile to include your first and last name, as required in our comments policy. Then reload this page and you'll be set up for commenting. Update your profile
Show Comments ()
Comments are automatically closed two weeks after an article's initial publication. See our comments policy for more.