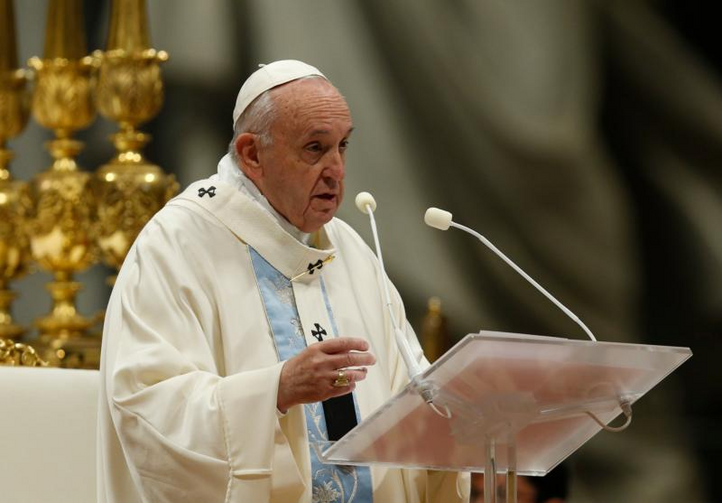 Pope Francis give the homily as he celebrates Mass on the feast of Mary, Mother of God, in St. Peter's Basilica at the Vatican Jan. 1, 2020. (CNS photo/Paul Haring)

VATICAN CITY (CNS) -- The "ad limina" visits bishops are required to make to the Vatican are occasions to be honest about challenges, while also being encouraged to hope, said Bishop John T. Folda of Fargo, North Dakota.

"It's tempting at times to lose hope when all you hear is bad news and with some of the challenges we face in our dioceses at home; it's extremely important to maintain a spirit of hope and the 'ad limina' I think has been that for me," Bishop Folda told Catholic News Service Jan. 13 after a two-hour meeting with Pope Francis.

Bishops from U.S. Region VIII -- North Dakota, South Dakota and Minnesota -- met the pope on the first day of their "ad limina" visit. The region's 10 dioceses have one archbishop, one auxiliary bishop, six bishops, one bishop-designate and two diocesan administrators.

Archbishop Bernard A. Hebda of St. Paul and Minneapolis had previously made an "ad limina" visit as bishop of Gaylord, Michigan, in 2012. Pope Benedict XVI was pope. Even then, the archbishop said, there was a group discussion, although each bishop prepared a topic to discuss.

"This was even more free flowing," the archbishop said.

Pope Francis spent about 30 minutes meeting with priests and seminarians from the 10 dioceses -- "he was very gracious and patient" -- and then spent a full two hours alone with the bishops, Archbishop Hebda said. "It was pretty amazing. It was beautiful."

Bishop Folda, who was making his first ever "ad limina" visit, said that even though he lived in Rome for a few years of graduate work as a student-priest, it was a whole new experience to pray at the tomb of St. Peter as a bishop together with his brother bishops from the region.

The Editors: Evangelization, polarization and accountability among the most pressing issues for the U.S. church
The Editors

The meeting with Pope Francis, Bishop Folda said, "was a really easy give-and-take, very conversational, which was delightful. And he was very interested in hearing about our experiences."

The topics ranged from the sexual abuse scandal to migration, and from pastoral care of Native American communities to cultivating unity among diversity in the diocese, not just with different ethnic groups, but among Catholics with different preferences and priorities.

Pope Francis shared "some things that were on his mind, but also wanted to hear from us what are issues we are facing," Archbishop Hebda said. Adding anecdotes and reflections from his own years as archbishop of Buenos Aires, the pope "really did a phenomenal job of connecting with each one of us and helping each one of us understand that he knows our situation and he's very close to us."

Pope Francis often talks about "accompaniment," the archbishop said. That's what they felt the pope was doing with them.

Bishop David D. Kagan of Bismarck, North Dakota, told CNS that the pope urged the bishops to pray, especially for themselves, when making decisions for their flock.

"'The best thing and the first thing you simply have to do for the church -- I mean your people -- is pray for them,'" Bishop Kagan recalled the pope saying. "'But you're not going to be much of a help if in your prayer, you don't pray for yourself."

The pope, he said, told the bishops that praying for themselves required humility "because we tend to think that because we're bishops, we have the answers."

"'The only one who has the right answers is the Lord,'" the pope said, according to Bishop Kagan. "'Pray for yourselves and then pray for your people and the Lord will answer and do the rest. Just don't get in his way.'"

Seven groups of bishops from the United States completed their visits in November and December, and, Archbishop Hebda said, clearly, Pope Francis has a good understanding of the U.S. church. "Some of the things that he shared with us were based on what he had heard from those other bishops."

For example, he said, Pope Francis was well aware of "divisions within our country that are not particularly religious-based, but some of the political challenges and how a bishop manages to help form his faithful about those things. He was very sensitive to that."

Bishop Kagan said Pope Francis reminded the bishops that their first duty is not to get involved in "political quarrels," but rather "to pray and to teach the principles of the church."

"He reminded us -- and we all kind of laughed as he did -- he said, 'Don't forget: We already have a savior. We don't have to try and do that again. We have to believe in him and allow him, through us, to lift people up to the truth of the Gospel and to a life of true dignity as they were created by God,'" the bishop recalled.

Bishop Kagan also said he told the pope about how people are moving to North Dakota to work in the oil and natural gas industry. But along with an increase in population and wealth, he said, there also has been an increase in homelessness and crime, including "drug addiction, prostitution and human trafficking."

The pope, he said, was "very knowledgeable of these things" and gave "very sound advice but it always begins with praying for those whom we serve."

"'It's not a matter of running and hiding in the chapel so you don't have to face those things,'" Bishop Kagan recalled the pope saying. But "'if you don't begin with prayer, whatever you do is not going to have a lasting and good effect.'"

Catholics who no longer practice their faith was another topic raised, Bishop Folda said.

Traveling across the mainly rural expanse of the Diocese of Fargo the past six and a half years "has been really delightful and edifying," he said. "But it's also challenging because you realize that there are many people who unfortunately have drifted away from the practice of the faith and so it is always on my mind how can I reach out to them, how can I draw them, welcome them back to the active living of a faith in the church, helping them to see that everyone is welcome, everyone has a place."

"Being here in Rome for the 'ad limina' certainly brings that to the forefront of my mind as far as my own responsibility is concerned, as a bishop," he said.

Archbishop Hebda also told the pope about the pilgrimage of 25 young adults -- ages 21-35 -- who are accompanying the Minnesota bishops on their "ad limina" visits.

"As the young people expressed to us, they were coming in particular to pray for Pope Francis and to pray for their bishops," he said.