Where is former Cardinal McCarrick now? 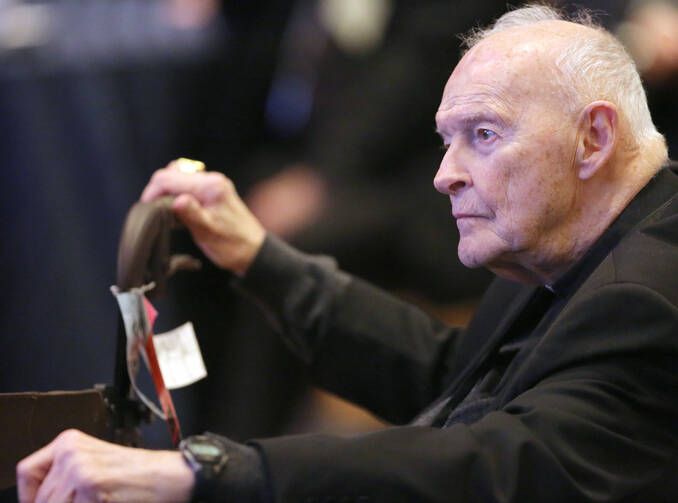 In this 2017 file photo, former Cardinal Theodore E. McCarrick of Washington is pictured in Baltimore, Md. A recent news report says a decision on whether to laicize Archbishop McCarrick could happen in mid-January. (CNS photo/Bob Roller)

This week Ashley and Olga interview Ruth Graham, a staff writer at Slate who consistently reports on religion with sensitivity and nuance.

Graham isn't afraid of tackling the most difficult topics—she recently got an interview with former Cardinal Theodore McCarrick by traveling all the way to Victoria, Kansas.

In the piece, Graham writes: “Suddenly, a tiny town of devout believers was home to an international symbol of institutional and individual monstrosity. Many of its residents, it turns out, aren’t happy about it. The story of McCarrick’s presence in Victoria is the story of a small community asked to live next door to a villain, and a huge institution figuring out where to hide its villains away.”

You can read the full story Graham reported here, and find more of her reporting here.

Since all the hosts are out this week, this episode doesn’t have SOTs or Consolations and Desolations. We’ll be back to our regular programming on November 8.

Confine HIM to an eternal Penitentiary.

In ages past, for various reasons, uncontrollable or badly behaved religious have been confined to monasteries or convents under 24/7 vigilant scrutiny in isolated locations. Why not these days?
If he wanted to sue for habeas corpus, he could then be charged.