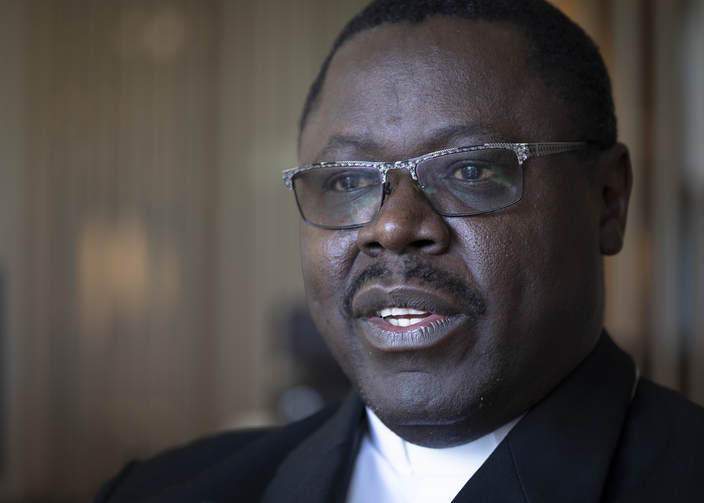 WASHINGTON (CNS) -- With the national government seemingly unable to function in most of the Central African Republic, Bishop Nestor-Desire Nongo-Aziagbia of Bossangoa has negotiated peace settlements with two armed groups operating in his diocese.

It may seem highly irregular, but for a population that has seen growing displacement, poverty, fighting and chaos over much of the past six years, it is a relief, Bishop Nongo-Aziagbia told Catholic News Service.

"They are able to return home. They are able to go back to their farms. They are able to plant. They can start trading again," he said in a July 15 interview while in Washington to meeting with representatives of the U.S. Conference of Catholic Bishops and U.S. government officials on Capitol Hill.

The same cannot be said for other regions of the Central African Republic.

"Every political regime seems to be linked to some militia -- how can such violence-prone movements be left to organize and plan?" asked the bishops in their message.

In the far northeastern part of the country, there are no roads and little chance for development as the national government, by Bishop Nongo-Aziagbia's estimate, controls only about 20 percent of the country's territory. As a result, they do most of their trading with neighboring Sudan and Chad -- even though Chad is a source for "mercenaries" hoping to get their hands on some of the wealth in the Central African Republic, he said.

The same is true for the country's southeastern area, which borders Congo. They use Congolese currency and do what trading they can with the Congolese. Lack of infrastructure and lack of access to the rest of the nation has made things this way, Bishop Nongo-Aziagbia said.

Sudan and Congo have faced their own prolonged internal challenges, but so has the Central African Republic. Bishop Nongo-Aziagbia was ordained a bishop, as were three of his fellow bishops in the nine-diocese nation, in 2012. "People considered us 'emergency bishops'" at the time, he recalled. But the real emergency was when the country's political troubles boiled over into violence the following year.

Since then, "many of the things that we have built up" as a diocese over time -- including schools, churches and health facilities -- "have been destroyed" in Bossangoa, the nation's seventh-largest city, Bishop Nongo-Aziagbia said.

The bishop added there have been efforts made by others to partition the country into two separate nations, one for Muslims in the east near other majority-Muslim states, leaving the western part of the country for Christians.

Bishop Nongo-Aziagbia rejects that argument. He said others want to portray the multisided conflict in the country as a religious war, but that Christians and Muslims are working together to achieve peace in the nation's many distressed regions.

There is no national army, but there is an armed gang called the "Movement of Sharks," led by set up by hardline backers of President Faustin-Archange Touadera to fight opposition groups.

A plenary of bishops meeting in June in Bossangoa condemned the gang's actions and warned of growing exasperation with empty peace pledges.

"Every political regime seems to be linked to some militia -- how can such violence-prone movements be left to organize and plan?" asked the bishops in their message.

The toughest task ahead may lie less in rebuilding schools, houses and the like, but in rebuilding trust. Bishop Nongo-Aziagbia said some young Catholics from his diocese -- Catholics make up about one-third of the Central African Republic's 4.5 million population -- want to join armed groups out of revenge. Other Catholics, he added, are skeptical at best over the call for reconciliation.

The bishop described their attitude as: "What do I have to reconcile? My house? My land?" Some, he noted, have lost family members to the violence.