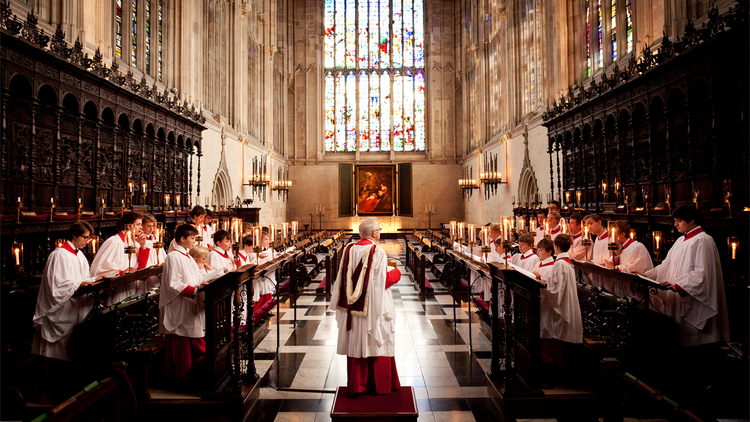 LONDON (RNS) — King’s College Chapel at Cambridge University has one of the most famous choirs in Britain, known around the world for its Christmas Eve service, which the BBC has been broadcasting for the past 70 years. When Paul Rimmer decided to take his two sons to a choral evensong at the chapel two weeks ago (June 16), he expected his music-loving son Tristan would enjoy the service.

Instead the Rimmers’ visit brought headlines and an apology from the dean of the chapel and inspired a debate about how churches treat children and adults with autism after Rimmer was asked to remove 9-year-old Tristan, who has autism, for making too much noise.

My autistic sons aren’t a version of the cross. They’re an invitation to love and serve.
Ann-Marie Gatch

A life of service is never easy. Having autism can make it even harder.
Gus Hardy

“Music is very important to him, and it’s noticeable that he particularly likes good, quality music. He doesn’t like it when it is off-key,” said Rimmer, a post-doctoral fellow in earth sciences at the university. “We’d been before to King’s College Chapel as a family with my wife but without Tristan. But my wife was away and so was Tristan’s carer.”

“For him, calling out is a way of him expressing himself. But then someone came and asked us to leave. I explained that my son is autistic, but he insisted and said the dean wanted us to go, so we left,” he told Religion News Service.

“This was a form of discrimination against my son,” he added.

Rimmer was so incensed that he wrote to the dean, the Rev. Stephen Cherry, then posted his letter on Facebook. “As a Christian, I believe that worship is primarily intended to glorify God,” he wrote, “and may have misinterpreted your Evensong as an actual worship service, at which my son’s expressions must surely be pleasing to God, the experience of other worshipers being secondary.”

The dean replied with an apology, also on Facebook, in which he clarified that he had not himself asked for the Rimmers to leave but took responsibility for what had happened. “Sometimes we fail,” he wrote, “and I realize that we especially failed you and Tristan on Sunday afternoon.” The dean and Rimmer met last week to discuss how King’s College Chapel can do better.

Rimmer’s post has led to broader soul-searching about how houses of worship treat people with autism and others with special needs. He has been inundated with messages recalling similar incidents elsewhere and promising him and Tristan a proper welcome at their services. He has connected several organizations with expertise in autism with Cherry so that the chapel can get informed advice.

“I am sad that it has happened so much to other people but also amazed how many people invited us to their churches,” Rimmer said.

Rimmer said that he thought it could be appropriate for special services to be sometimes held for people with special needs but that it is also important for people like his son to be welcome at all services unless there are exceptional circumstances — such as a recording or broadcast.

According to the National Autistic Society in the U.K., more than a quarter of people with autism and their families have been asked to leave a public place because of behavior linked to their autism.

In recent years churches have been making efforts to be more inclusive. A recently published book, “Symbols of Faith: Faith formation and sacramental preparation for people with learning disabilities,” by pastoral expert Diana Klein, includes a forward by Cardinal Vincent Nichols, the Roman Catholic Archbishop of Westminster, in London.

Quoting Paul’s First Letter to the Corinthians, “The members of the body that seem to be weaker are indispensable,” Nichols wrote. “As St Paul says, they SEEM to be weaker. Our misperception of those with learning disabilities is revealed as just that, misrepresentation. In contrast, we are asked to recognize their indispensability.”

Rimmer said that Cardinal Nichols “reflects how I feel.”

“Some people have written to me to say that they have been on pilgrimage with people who expressed themselves in very different ways, and it didn’t take away from the experience. It added to it,” he said.

Last year the Church of England held a conference on disability at which the Archbishop of Canterbury said that “deep listening to those with lived experience of disability — is absolutely vital if we are to be a Church where everyone is valued and everyone belongs.”

The Anglican Diocese of Oxford has also published a guide, written by Ann Memmott, who herself has autism, to welcoming those with autism. Memmott estimates that, given that one in 30 people has autism, each parish might have as many as 80 people with the condition.

“People with autism like known routines and known situations and find change and noise very distressing,” she wrote in her guide and warns that even walking through the church door may be difficult for people with autism.

Interactions such as sharing the peace can be a surprise to any new churchgoer, she notes, but can present a particular problem for new visitors with autism, who may have severe pain when their hand is shaken or when someone hugs them. Their reluctance can often be misinterpreted as being antisocial.

Sharing fellowship via a wave or just sitting down in quiet prayer during the peace should be allowed, she said, without people mistaking it for rudeness.

Other steps toward making churchgoers who have autism more welcome include having clear explanations about how to participate in rituals, either on a website or handed out at the door, and providing a quiet rest area in case the noise of a service becomes too much.

Memmott also refers to family experiences similar to the Rimmers’, with people reporting that they had been asked to remove their child in case he was a distraction to the preacher and other families glaring at them when their child was noisy.

The United Kingdom is hardly the only place struggling to include those with disabilities.

Last year Clemson University sociologist Andrew Whitehead found that churches are failing children with autism and that they were twice as likely as children without such a chronic condition to never attend church.

His study, published in the Journal for the Scientific Study of Religion, showed that religious communities were much more sympathetic to children with physical conditions such as asthma or blindness.

Whitehead has two children with non-verbal autism and said his family has struggled to find places of worship over the years because of the difficulty of finding a place that welcomes and accommodates particular children’s needs.

“There is no empirical evidence that congregations in the U.S. are becoming more enlightened about autism and how to respond to children with disabilities. Surely, some are! But in the aggregate, it appears there are still significant barriers to families with children on the autism spectrum.”

According to Rimmer, who is from Colorado, he and his wife have experienced similar experiences in the United States as well as the U.K.

“People often just don’t understand autism. But when you are asked to leave, it is shocking,” he said.

The father of the autistic boy wanted to give his son a beautiful, musical experience. Unfortunately, he was only considering what he wanted for the boy, and not what the rest of the attendees expected. A person of any age who cannot attend a live performance without interruption doesn't belong in the audience. While the boy is young, and just learning to deal with his autistic behavior through therapies now available, his musical exposure can be rich and varied through television and other recordings. This anxious parent's upset is unfounded in my experience.

there seems to be a failure to understand that the child is special and that certain environments are simply not suited to handling individual cases but are built to handle the majority of customers who do not create problems during organised activities. It seems unrealistic and equally insensitive to change the whole zeitgeist for one child. Was there a private room available where the boy could have heard the music without interrupting other people's enjoyment of it too? Please do not expect me to change my whole lifestyle because your child has problems. I might like to hear the music as well. The problem can best be described as: do we make the part fit the whole, or do we make the whole fit the part?