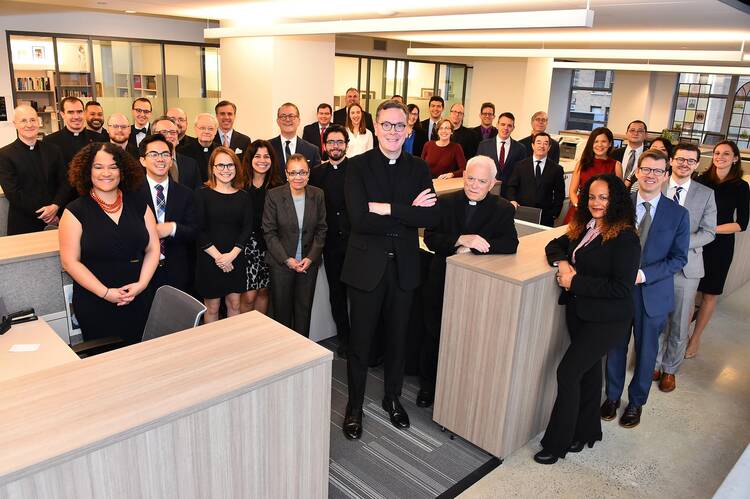 Last month, Arturo Sosa, S.J., the superior general of the Society of Jesus, announced four universal apostolic preferences, or reference points, for the ministries of Jesuits around the world. “For the last 16 months, the Society of Jesus has been following a process of discernment so as to better meet the needs for our mission at our present time,” Father Sosa said in explaining why the Society has taken this step.

The four points, presented in a letter to all Jesuits and approved by Pope Francis, are meant to guide the Jesuits and their colleagues in the “common mission of the Catholic Church” for the next 10 years. The four points are: First, as men of “prayer, rooted in Christ,” Jesuits must help people move closer to God through discernment and the Spiritual Exercises of St. Ignatius Loyola, especially in response to a more secularized society. Second, Jesuits must walk with the most marginalized and excluded in the world, including the poor and other vulnerable people. Third, the Society of Jesus and its ministries must place a focus on accompanying young people; and fourth, it must prioritize “care for our common home” and the protection and renewal of the environment.

America strives to understand and highlight the experiences of those on the margins.

Pope Francis thanked Father Sosa and expressed support for the four preferences. He stated that they “are in harmony with the present priorities of the church [as] expressed through the ordinary magisterium of the pope, of the synods and of the episcopal conferences.”

In a world that is becoming increasingly secular and polarized, the four preferences remind us that no matter what happens in the world, we are called as Catholics to promote and live out God’s mission. At America Media, these preferences also speak directly to the mission we have embraced since 1909: to pursue the truth in love. Because of this mission and in solidarity with the vision of our founders, we have always viewed America not primarily as a magazine or a company but as a ministry.

From our podcast for young Catholics to our continued coverage of difficult issues, like the sex abuse crisis and racism in the United States, to our reporting overseas, America strives to understand and highlight the experiences of those on the margins. Every day, we strive to be, as our editor in chief, Matt Malone, S.J., wrote in 2014, “contemplatives in action at the intersection of the church and the world.” Through this aspiration, we labor to live out continuously the mission of the church and of the Society of Jesus, which serves it.

As a media ministry, we commit ourselves to pursuing these preferences and to encouraging dialogue and discernment among Jesuits and our many colleagues about how these preferences can shape the future of our ministries.

Saint Ignatius of Loyola - Pray for us.