Pope Francis at abuse summit opening: “Listen to the cry of the little ones” 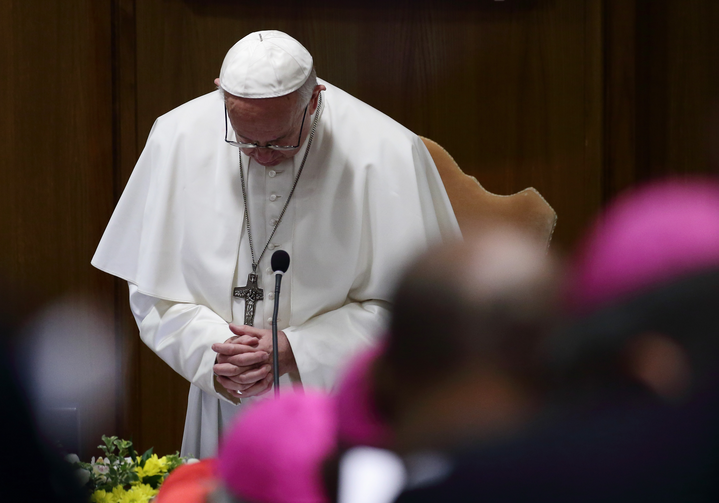 Pope Francis prays during the opening session of the meeting on the protection of minors in the church at the Vatican Feb. 21, 2019. (CNS photo/Evandro Inetti, pool)

VATICAN CITY (CNS) — Opening the Vatican summit on child protection and the clerical sexual abuse crisis, Pope Francis said, "The holy people of God are watching and are awaiting from us not simple, predictable condemnations, but concrete and effective measures" to stop abuse.

The summit meeting Feb. 21-24 brought together almost 190 church leaders: the presidents of national bishops' conferences, the heads of the Eastern Catholic churches, superiors of some men's and women's religious orders and top Vatican officials.

In his brief opening remarks, the pope prayed that with "docility" to the Holy Spirit, the bishops at the summit would "listen to the cry of the little ones who ask for justice."

The pope's main address to the assembly was scheduled for Feb. 24 after the discussions, a penitential liturgy and a concluding Mass.

“The holy people of God are watching and are awaiting from us not simple, predictable condemnations, but concrete and effective measures.”

Cardinal Luis Antonio Tagle of Manila, Philippines, gave the first formal talk of the gathering, acknowledging how church leaders for so long ignored the suffering of the victims of clerical sexual abuse and covered up the evil crimes of the priest-perpetrators.

Sometimes, he said, bishops were simply afraid to look at the wounds caused by their priests, but he insisted that one cannot profess faith in Christ while ignoring the wounds inflicted on the people Jesus loves.

Using the Gospel stories of Jesus' post-resurrection appearances to the disciples, especially the story of Jesus inviting St. Thomas to put his hands into the wounds on Jesus' hands and side, Cardinal Tagle told the bishops, "Those who are sent to proclaim the core of our Christian faith—the dying and rising of Christ—can only do so with authenticity if they are constantly in touch with the wounds of humanity."

“The pope prayed that with ‘docility’ to the Holy Spirit, the bishops at the summit would "listen to the cry of the little ones who ask for justice.”

The Christian faith itself and the ability of the Catholic Church to proclaim the Gospel is "what is at stake in this moment of crisis brought about by the abuse of children and our poor handling of these crimes," the cardinal said.

But, he asked, "how do we as bishops, who have been part of the wounding, now promote healing?"

Vatican sex abuse summit: what you need to know
The Editors

First, the cardinal said, the bishops must "draw close to their wounds and acknowledge our faults" and then take concrete steps to ensure all children and vulnerable adults are safe in the church's care.

Justice for the victims is an absolute necessity, he said, but justice by itself "does not heal the broken human heart."

The church can never ask victims to forgive and move on—"no, far from it," the cardinal said.

But, knowing that forgiveness often aids healing, he said, church leaders must "continue to walk with those profoundly wounded by abuse, building trust, providing unconditional love and repeatedly asking forgiveness in the full recognition that we do not deserve that forgiveness in the order of justice, but can only receive it when it is bestowed as a gift and grace."

A very unrealistic agenda for the short duration of this summit:
https://www.vaticannews.va/en/pope/news/2019-02/protection-minors-points-of-reflection-vatiab.html
And for all points -except #12 (relevance???)- the horse has already galloped out of the barn!

It has been stated over, and over, and over again, and much evidence and proof has already been given to help our church leaders understand-Sexism causes and covers up child sexual abuse and the abuse of women. This is especially so within patriarchal religious systems like our Church Hierarchy. This is probably why Jesus nor any of the original 12 Apostles ever recommended, anywhere in the New Testament that we run the Church by a patriarchy of any variety. It is also why the apostles praised women who led churches in their homes, and yes women were presbyters (the word used for priests or people who presided over Holy Eucharist, heard confessions and counseled sinners, etc.) as well as men in the early church. It is from appx. 300 years after Christ, from Emperor Constantine's time and after, that the church started pushing women out of leadership roles. It is more likely than not that women were ordained priests and even bishops in the early church. Our past church leaders went out of their way to destroy much of our own history, and especially any history that proved activities they did not want continued into the future. Historians believe we destroyed upwards to 5 times what we currently have of the historical documents and possible scripture writings of our church.

We should note that the one cure to our church's abuse crisis, and the only one which would actually cause the child abuse to lessen dramatically and very quickly in our church, ordaining women to priesthood, is not still allowed for discussion at this cutesy, dishonest gathering. That is because if the cure is ending patriarchy and taking all sexism out of our laws, well we would just prefer to keep having our kids sexually abused, our churches closed, constantly or until we utterly self destruct.

Below is yet another article evidencing how patriarchy in religion leads to child sexual abuse and physical sexual abuse of women. This time the church is Baptist. So Yes it includes married male ministers too!
Alas - you mean it wasn't celibacy or homosexuality that caused the abuse in Catholicism- who knew?! All of you Bishops! That is who! since it has been brought up to you zillions of times by now! Also, it should be noted sexual discrimination alone is a form of sexual abuse as it demeans the very humanity of women.

Hhmmm what do you think we should be changing? let me see . . let me see . . You know that Jesus keeps hiding these important answers from us poor bishops. Yeah right!! What a scam baby!!

Rapists Presented by Their Church as Men of God
Feb. 20, 2019
Southern Baptist leaders ignored the wrongdoing. An all-male clergy is part of the problem.
Loren Elliott/Agence France-Presse — Getty Images

Loren Elliott/Agence France-Presse — Getty Images
When a journalist for the Illinois Baptist newspaper reported in 2002 on a Baptist pastor who had sexually assaulted two teenage girls in his church, one apparently just 13 years old, he received a furious reprimand.
Glenn L. Akins, then running the Illinois Baptist State Association, offered a bizarre objection: that writing about one pastor who committed sex crimes was unfair because that “ignores many others who have done the same thing.” Akins cited “several other prominent churches where the same sort of sexual misconduct has occurred recently in our state.”
In the end, the Baptists ousted the journalist, Michael W. Leathers, while the pastor who had committed the crimes, Leslie Mason, received a seven-year prison sentence and then, as a registered sex offender, returned to the pulpit at a series of Baptist churches nearby. So Leathers is no longer a journalist, and Mason remained a pastor.
That saga was cited in a searing investigation by The Houston Chronicle and The San Antonio Express-News that found that the Southern Baptist Convention repeatedly tolerated sexual assaults by clergymen and church volunteers. The Chronicle found 380 credible cases of church leaders and volunteers engaging in sexual misconduct, with the victims sometimes shunned by churches, urged to forgive abusers or advised to get abortions.
“Some victims as young as 3 were molested or raped inside pastors’ studies and Sunday school classrooms,” The Chronicle reported.
Leathers told me he is glad he wrote the 2002 article, even if it cost him his career. He expressed frustration at Southern Baptist priorities: The church leadership would expel a church that appointed a woman as senior pastor, even as it accepted sexual predators.
The indifference to criminal behavior is an echo of what has been unearthed in the Roman Catholic Church over the decades. The latest sickening revelations are of priests getting away with raping nuns and with assaulting deaf students.
These new scandals provoke fresh nausea at the hypocrisy of religious blowhards like Jerry Falwell and Pat Robertson who thundered at the immorality of gay people even as their own Southern Baptist network tolerated child rape.
I suspect it’s no accident that these crimes emerged in denominations that do not ordain women and that relegate them to second-class status.
“If God is male,” Mary Daly, the feminist theologian, wrote, “then the male is God.”
A rape survivor and abuse victim advocate at a 2018 rally protesting the Southern Baptist Convention’s treatment of women.Jeffrey McWhorter/Associated Press

A rape survivor and abuse victim advocate at a 2018 rally protesting the Southern Baptist Convention’s treatment of women.Jeffrey McWhorter/Associated Press
The result may be threefold: an entitled male clergy, women and girls taught to be submissive in church, and a lack of accountability and oversight. It’s complicated, of course, for many of the Catholic victims were boys, but there does seem to have been an element of elevating male clergy members on a pedestal in a way that made them omnipotent and unaccountable.
“Underneath it all is this patriarchy that goes back millennia,” Serene Jones, the president of Union Theological Seminary, told me, noting the commonality of the Catholic and Southern Baptist Churches: “They both have very masculine understandings of God, and have a structure where men are considered the closest representatives of God.”
The paradox is that Jesus and the early Christian church seem to have been very open to women. The only person in the New Testament who wins an argument with Jesus is an unnamed woman who begs him to heal her daughter (Mark 7:24-30 and Matthew 15:21-28).
The Gospel of Mary, a Gnostic text from the early second century, suggests that Jesus entrusted Mary Magdalene to provide religious instruction to his disciples.
But then conventional hierarchies asserted themselves, and women were mostly barred from religious leadership.
After The Chronicle’s investigation, the Southern Baptists have promised greater training and more background checks, but what’s needed above all is accountability and equality.
“Prohibiting women from the highest ranks of formal leadership fosters a fundamentally toxic masculinity,” Jonathan L. Walton, the Plummer professor of Christian morals at Harvard, told me.
Baptist women have been ready to be heard for a century. I know because my great-grandfather John Howard Shakespeare was the leader of Baptists in Britain from 1898 to 1924 and practiced his sermons on his wife. When she once insisted that she had something else to do, he locked her in an upstairs room.
Read More About Sexual Abuse in the Church
Opinion | Russell Moore: Southern Baptists Face Their #MeToo Moment
Feb. 13, 2019

Rapists Presented by Their Church as Men of God