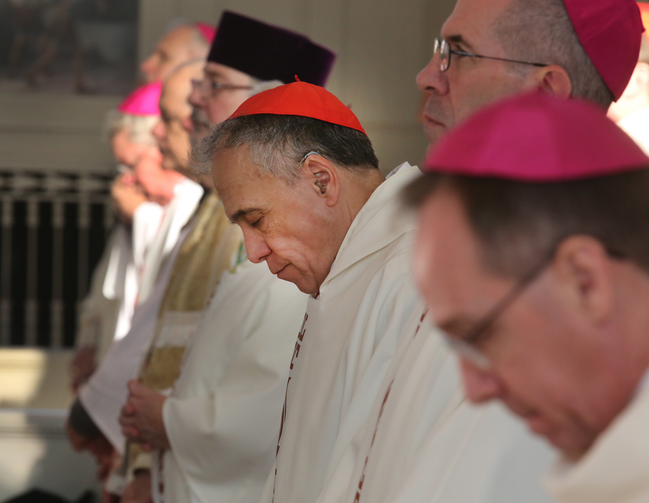 Cardinal Daniel N. DiNardo of Galveston-Houston, president of the U.S. Conference of Catholic Bishops, bows his head in prayer during Mass in the Chapel of the Immaculate Conception at Mundelein Seminary Jan. 3 at the University of St. Mary of the Lake in Illinois, near Chicago. The U.S. bishops are on retreat Jan. 2-8 at the seminary, suggested by Pope Francis in September, which comes as the bishops work to rebuild trust among the faithful as questions continue to revolve around their handling of clergy sex abuse. (CNS photo/Bob Roller)

As 2019 begins, all eyes in the Vatican are turned toward the upcoming summit on sexual abuse, and recent weeks have brought a number of stories that reveal how Pope Francis aims to lead the church on this issue.

First, the Vatican confirmed this past weekend that it is investigating a third accusation of abuse against Archbishop Theodore McCarrick. On “Inside the Vatican” this week, Gerry O’Connell and I look at how—and why—the Vatican is expediting that investigation.

Next, we examine the U.S. bishops’ retreat, which they held at the behest of Pope Francis. The pope sent the Vatican’s top preacher, Capuchin Father Raniero Cantalamessa, along with a personal letter to guide the retreatants in their reflection.

Finally, Gerry and I look at the resignation of the director and deputy director of the Vatican’s press office, and what challenges the interim director will face as he coordinates media coverage of February’s summit on sexual abuse.

Your lead picture speaks volumes to me. We have a closed door meeting of the US Bishops regarding a crisis and they are all wearing their red caps! They all know that each is a Bishop! It appears to be an illustration of the deep CLERICALISM that allows them to live in a separate world. The secular political world uses the term "deep state" as the barrier to civil political transparency : in a sense our Church is sabatoged by this "DEEP CLERICAL CULTURE".

In 1975, my Bishop told me "YOU can go far in the Church only IF you are more PRUDENT." I'm afraid that the virtue of prudence has been corrupted into a VICE which is part of the source of our state of affairs.