Will the Vatican’s sexual abuse summit make a difference?

Will the Vatican’s sexual abuse summit make a difference? 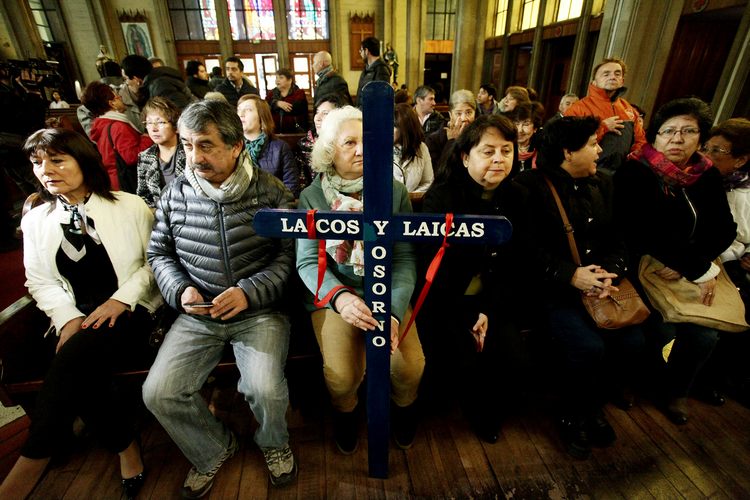 Members of the organization "Laity of Osorno" take part in a Mass celebrated by special Vatican envoys, Archbishop Charles Scicluna and Father Jordi Bertomeu Farnos, in Cathedral of St. Matthew in Osorno, Chile, June 17. The Vatican envoys, who investigated clerical sexual abuse in Chile, were on a mission to promote healing. (CNS photo/Fernando Lavoz, Reuters)

This week on “Inside the Vatican,” Gerry and I take a look at the newly announced committee that will plan the Vatican’s upcoming, high-stakes summit on sexual abuse. One committee member, Cardinal Oswald Gracias of India, told Crux in October that the meeting “will be successful, or it will be a disaster for the Church.”

So, can it succeed in creating lasting change?

Pope Francis summons the world’s top bishops for sexual abuse prevention summit
Gerard O’Connell
In this week’s episode, we try to answer that question by looking at the plans for the meeting. It will have a structure similar to the last synod, with listening sessions, work in language groups and involvement from lay people and religious. In addition, bishops will listen to speeches by survivors of sexual abuse and participate in a penitential liturgy with them. The goal, committee member Archbishop Charles Scicluna told Gerry, is to get the bishops “on the same page” with Pope Francis about sexual abuse. The real change, we conclude, will depend on how the bishops decide to follow through after the summit ends.

It could... make a difference. But not without meaningful “dialogue” with survivors first. I believe the survivor community, whatever that is, must somehow come together in January to produce some kind of document or statement or list of Ideas, or Recommendations, etc. about what we need, about what we think is important for our healing, which includes our suffering families... I will throw out a few of my own personal suggestions here. These have in no way really been polished or categorized, they’re just welling up from my hopeful soul, still breathing... 1) Get All Of It Out Now. The truth about many, many allegations against nuns must be revealed. This is not known yet by the Laity. It is the next shoe to drop. If a new major “Secret” comes out after the February Synod, it will all be over but the sound of shoes scraping on all the floors to all the doors in all the Catholic Churches of the world. 2) Do It Right This Time... Imagine for a moment that the Crisis never happened. By that, I mean, when allegations started flowing in from all over the United States in the 1970’s, 80’s, 90’s, everyone did the Right Thing (immediate outrage, and action to protect kids FIRST). The Hierarchy needs to walk out of the Synod and do that. Just act like real Fathers. Just do what real fathers would do. I believe The Prize is just over the next high ridge of peaks blocking our way forward. Love is always the answer. If the February Synod is a meeting of hearts and souls, instead of bankers and attorneys and clerics, it will succeed. I began to heal from clergy abuse the day I started praying again after 49 years. That was Xmas morning, 2017. Happy Holidays.

No. It will probably not get at the underlying problem.

It is just another diversion.
For reasons particular to the post-WW2, rich first world cultures such as the pagan propagation of the Age of Aquarius, the wide distribution and experimentation with mind-altering drugs and mushrooms and the contraceptive Pill, the so-called sexual liberation movement proposed and supported by pop-psychology and the abandonment of infant baptism, a generation of people fell into grave error and practised an orgy of narcissistic self-indulgence and perversion which lasted a generation - from the 1960s to the 1990s.
Prophetic revelation and protest and complaint was ignored, stifled or punished. In the UK, think Lord Longford and Mary Whitehouse and I do not know who cried in the wilderness in the USA.

Now that the epidemic described above has passed, we are looking at the damage caused. The devil has had his way with a whole generation and is tempting the younger generations with other alluring evils.

The perversion of power and hierarchy within the institutions of mankind which includes religious denominations as well as parliamentary and bureaucratic and voluntary group officials is the elephant in the room.
In Australia, boy-scout leaders and sports-coaches and charitable lay institutions such as the St Vincent de Paul Society and Legacy harboured sex offenders behaving in exactly the same way as the abusive Catholic presbyters and their bishops.

Christians have only just managed to have slavery looked upon as a wrong and that was progress.
There are still very large numbers of slaves alive and living in societies spread throughout the world so it was only a step in the right direction, not a solution.

In like manner, if it is the plan of the Holy Spirit to teach us more about the wrong ways and the right way for hierarchy and delegated power and responsibility to be exercised then it makes sense that this will first be done amongst Christians.

Abuse of power and authority is the problem for today, not sexual abuse.
Spiritual directors, doctors and psychologists are at this very minute offering and providing counselling and healing and reconciliation and rehabilitation for each, all and every person who has been hurt or harmed by abuse who asks. Long way to go towards perfection, expect errors and diversions up blind alleys along the way but many are experienced and proficient in this by now and the leaven of it amongst Christians is raising the secular dough.

Power - human power: stolen, granted, delegated, endowed, distributed, exercised and monitored - is it time for the first multi-national corporation, the Roman Catholic Church, to be fashioned into a model for the world to admire and follow?

If Francis is using the recent Synod on Youth as a model, then nothing will happen except talk,talk, talk--with important voices missing--e.g. survivors and women. We do not need a "global solution", we need local solutions that involve the use of local law enforcement authorities to arrest and try all those credibly accused priests and bishops of abuse or collusion. Francis, once again, is kicking the can down the street. Too bad the US Conference of Bishops allowed the Vatican to overrule their local proposals. Could we have a really dramatic local summit in USA NOW, where people are named and denounced without having to wait for February? Why do we need to ask the Offenders' permission?

I agree that real change must happen at the Diocesan level. I also agree that any solutions must include Survivors and women. It will be very difficult to achieve. In my opinion, Church Leaders must first recognize the peril in which they find themselves, and The Church, as well. Relevance cannot be faked, or assumed. This Synod is a last chance, not a first chance. I truly fear that they do not realize this fact, as far as Survivors are concerned. It’s now or never. If they do not get something right soon...??? I honestly believe that many in the Hierarchy are just waiting for Survivors still alive to die. Then they won’t have to change in any way at all, and “The Show” will go on forever.

I appreciate that there is a global meeting on the topic, as this is a human condition/sin based problem - too often this issue has been solved "in house." I also appreciate that many in the global church are asking for women's voices in this subject. May there be hope for grace to be the primary mover in this painful topic, a grace that may be painful, but is necessary.

I have lost complete Faith in the American Conference of Bishops as a group. They need to reduce membership of Bishops who belong to the Conference and add Women to replace them with voting rights. How’s that for a Starter. This should also be done with the Cardinals who put too much self importance on their own status in the hierarchy of the Church. It’s time to realize like every other governing institution today that men don’t have all the answers to solve problems.

Seems unlikely that anything coming from the Vatican will change this situation but here on our shores, RICO is coming.

The headline question is one of power - the failed leaders who have it in the institutional church will meet to come up with a plan on how to retain it. The rest of us, The People of God, must let them know, by all means possible, that we must be included.

In calling for the February meeting of all the heads of Conferences of Bishops, Pope Francis makes clear that he believes in two things:

> The clergy sexual abuse crisis is not limited to one Country or the West, and
> He wants a universal solution and not one limited to the approach of one country or one Conference of Bishops.

Will the sexual abuse summit make a difference? That will depend on four things:

1. If the investigative committee or agency to be formed to thoroughly investigate sexual abuse allegations. coverup or the gross negligence of an ecclesial office (a bishop, cardinal or pope) will be "lay-lead". If not, this summit will not make a difference. This investigation must include priests, bishops, cardinals and popes. In other words, in the U.S. all the allegations in the PA Grand Jury Report, the McCarrick Scandal and the Vigano letter.

2. If all the bishops and cardinals who are found to be guilty of sexual abuse or coverup by an independent lay-lead investigative committee are asked to resign their office/position or be defrocked. If not, this summit will not make a difference.

3. If the McCarrick scandal is thoroughly investigated to determine why and how Pope JP II promoted him to Cardinal when US Bishops and Cardinals knew about his sexual abuse as well and the Apostolic Nuncio. If not, then this summit will not make a difference.

4. If the Church institutes significant sexual abuse allegation reporting procedures, effective and efficient investigative processes, and juridical reforms that will eliminate, as much as reasonably possible, the root causes of sexual abuse and coverup including clericalism. If not, then this summit will not make a difference.

No, I don't think it will help, because the pope refuses to address the actual causes of the sex abuse of children and sexual activity with adults by priests.