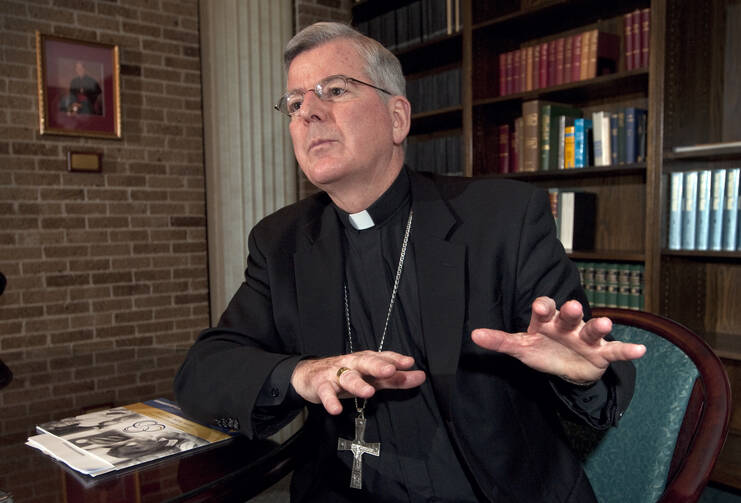 FILE - In this photograph taken on Monday, Oct. 18, 2010, Archbishop John C. Nienstedt talks about the Archdiocese of St. Paul and Minneapolis consolidation plan, which includes closing 21 churches, at his office in St. Paul, Minn. His successor, St. Paul and Minneapolis Archbishop Bernard Hebda wrote a remarkable letter to his flock Friday, Dec. 14, 2018, in which he revealed he sent the Vatican in 2016 a new allegation of improprieties with minors against retired Archbishop John Nienstedt. (AP Photo/Craig Lassig)

VATICAN CITY (AP) — A prominent U.S. archbishop is asking the Vatican for answers about the status of an investigation into alleged sexual misconduct by his predecessor, who was forced to resign in 2015.

St. Paul and Minneapolis Archbishop Bernard Hebda wrote a remarkable letter to his flock Friday in which he revealed he sent the Vatican in 2016 a new allegation of improprieties with minors against retired Archbishop John Nienstedt.

It was not immediately clear if the alleged incident in Germany was ever investigated. Nienstedt has denied the allegation.

County prosecutors informed Hebda of the allegation in 2016. It accused Nienstedt of inviting two minors to his hotel room in 2005 at a Vatican-organized youth rally in Germany to change out of wet clothes, the archbishop wrote.

Hebda said Nienstedt "then proceeded to undress in front of them and invited them to do the same." He noted that Nienstedt denied the allegation.

Nienstedt resigned as archbishop after Minnesota prosecutors charged the Twin Cities archdiocese with failing to protect children from a predator priest who was later convicted of molesting two boys.

Nienstedt was one of the first U.S. bishops known to have been forced from office for botching sex abuse investigations. He also faced allegations of engaging in inappropriate sexual behavior with adults. He denied misconduct, and the archdiocese hired two law firms to investigate those claims in 2014, but the results were never made public.

Hebda said as far as he knew, the Vatican suspended the 2014 investigation when Nienstedt resigned in June 2015. He called for a resolution to that probe, and for information about the alleged World Youth Day incident, which he learned about after Nienstedt's resignation.

The Vatican didn't immediately respond to a request for comment Monday.

Nienstedt, who was bishop of New Ulm at the time of the alleged incident in Germany, denied the claim in a Monday email to The Associated Press.

Nienstedt said it's hard to defend himself because it's his word against the word of his accusers, "and, as much as they seem to want to discredit me, I don't want to harm them."

Nienstedt's case has taken on new relevance given the sex abuse scandal surrounding ex-Cardinal Theodore McCarrick, the retired archbishop of Washington now accused of sexual misconduct with both adult seminarians and at least one minor.

Hebda and Auxiliary Bishop Andrew Cozzens have held up both the McCarrick and the Nienstedt scandals as evidence of the need for a lay-led mechanism to review misconduct allegations against bishops, who are answerable only to the pope.

Hebda said he is doing what he can within his authority by forbidding Nienstedt from exercising public ministry in his archdiocese.

Hebda said he is doing what he can within his authority by forbidding Nienstedt from exercising public ministry in his archdiocese. But he said Nienstedt's fate is ultimately in the Vatican's hands.

"The matter remains unresolved for the accusers, for Archbishop Nienstedt and for the public," he said. "I share the frustration that is felt by them."

The criminal charges against the archdiocese eventually were dismissed, but the archdiocese reached a civil settlement with authorities that was designed to increase oversight and transparency.

The Archbishop and the victims deserve a final report. It is not fair to anyone for this matter to be left hanging so long.