The synod reminds U.S. Catholics to listen to the global church 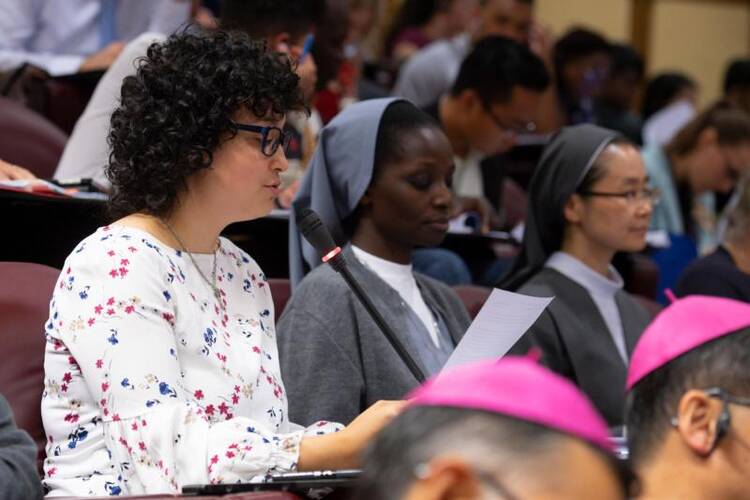 Sister Briana Santiago speaks at a session of the Synod of Bishops on young people, the faith and vocational discernment at the Vatican Oct. 4. (CNS photo/Vatican Media)

It is fitting that the canonization of Pope Paul VI was celebrated in Rome, in the midst of the meeting of the Synod of Bishops on young people, because Paul VI was known as the “pope of synodality.” He established the consultative body in the wake of the Second Vatican Council, so that the pope and the ever-sclerotic Roman Curia could “make ever greater use of the bishops’ assistance in providing for the good of the universal Church.”

For U.S. Catholics, every synod is also a valuable reminder—and corrective—that it is not all about us: The universal church is not always focused on our particular concerns, burdens or joys. For example, a number of U.S. bishops had called last month for the synod, a worldwide gathering, to be canceled because of further revelations of the depths of our own sex abuse crisis. Presumably the actual workings of the synod since then have been a sharp reminder that we are but a small part of a larger body and that we can learn much if we are willing to stop talking. As Pope Francis noted in his opening address on Oct. 3, courage in speaking is needed—but so is “humility in listening.”

While some of the working practices of this synod—for example, the unnecessary exclusion of women delegates from voting—have come in for much-deserved criticism, a number of public interventions have focused on issues the U.S. church would do well to consider: the disinterest of huge swaths of Catholic youth; the alienation of large numbers of women; a vocations crisis now entering its fifth decade; suffocating clerical cultures and all the sins they harbor and promote. In the face of these realities, the global participants in the synod clearly seek to establish a culture of encounter rather than one of retreat, one of invitation rather than rebuke. St. Paul VI, pray for them and for us.